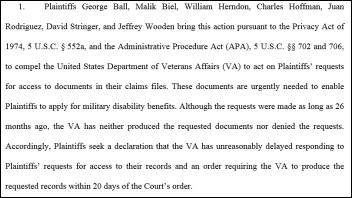 Seven disabled veterans sue the VA, claiming that they’ve waited 10 to 25 months for copies of their medical records, delaying their eligibility for benefits.

From CIO: “Re: patient engagement survey. Do CIOs really think they own it?” A HIMSS-sponsored poll finds that nearly half of health system CIOs believe they own patient engagement in their organizations, but I think there’s a definitional issue here. CIOs often mislabel the tools vs. the program when it comes to analytics, population health management, and patient engagement. The software is just one part of the initiative even though Meaningful Use muddies the picture with its purely technical requirements for patient engagement. I’m fairly certain CIOs don’t really believe they’re in charge of the entire program, but if they do, either they or their employer have a big problem. Non-clinicians (especially IT and marketing people) should not be trying to engage patients.

From Nasty Parts: “Re: Allscripts. What’s going on? Lots of recent senior departures: Diane Bradley, John Dragovits, Peter Mcclennen, Perry Sweet, and Chad Baugh, to name a few.” Unverified. The LinkedIn profiles of all of these folks still list Allscripts as their current employer, although I’ve found that in general people don’t update their profile until they get another job. 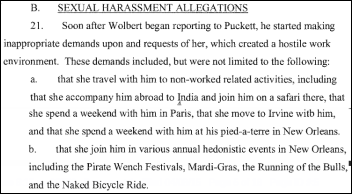 From Pirate Wench: “Re: interesting sexual harassment lawsuit against a healthcare IT executive.” It’s juicy, but keep in mind you’re reading only one of the inevitable two sides of the story. The lawsuit, filed by a demoted employee, says Quality Systems, Inc. (parent of NextGen) protects its male employees who harass female employees. The real story will be how the lawsuit is disposed of, which I strongly suspect will be by a sealed settlement since a trial would be unpleasant for both sides.

From Candid Cameron: “Re: females at HIMSS. I saw a big drop in booth babes, which I think is due to pressure from publications such as HIStalk. I’d like to see recognition of companies with at least 40 percent female executives or 40 percent female speakers at the conference.” I’m wary of assuming intentional bias (gender, age, nationality, etc.) in observing executive team demographic composition, but it would be interesting to see the percentage of VP-and-up females in each company.

This isn’t directly related to healthcare IT, so feel free to skip on down to the next section if it’s not your thing. 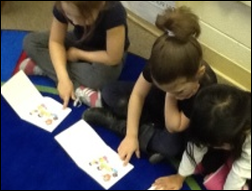 Our DonorsChoose project donations have jumped as another company offered a $500 donation in return for 20 minutes of Dana Moore’s time by telephone and our anonymous matching vendor agreed to match this donation as well. That brings our total to $8,000. I’ll be funding new projects as a result. Meanwhile, above is another of the many teacher thank you emails I received, this one from a kindergarten classroom for which we donated a projector. I was so moved that when I saw that Mrs. Henry had an open grant request for an AV cart to house their new projector that I funded that as well. 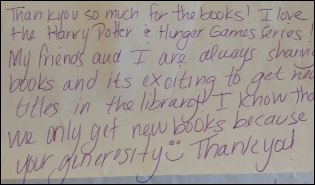 Meanwhile, here are a couple of student-written thank you notes from an earlier project we funded. DonorsChoose defaults the option to receive student notes to “yes” when you fund a project, but I unchecked it this last time because it’s a fair amount of work for the students and we funded so many projects I would be overwhelmed by all their notes anyway. Still, it’s gratifying to hear from the students who are actually benefitting from the donations. 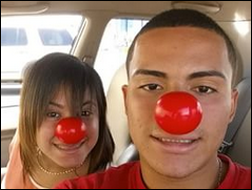 One of the more disturbing things I saw at the HIMSS conference was people running around wearing giant red noses, courtesy of a Walgreens fundraiser for children’s poverty. I like the cause but not the noses, which make me think of Stephen King’s evil clown in “It.”

April 22 (Wednesday) 1:00 ET. “Microsoft: The Waking Giant in Healthcare Analytics and Big Data.” Sponsored by Health Catalyst. Presenter: Dale Sanders, SVP of strategy, Health Catalyst. Microsoft has been quietly reengineering its culture and products to offer the best value and most visionary platform for cloud services, big data, and analytics in healthcare. This webinar will cover the Healthcare Analytics Adoption Model, the ongoing transition from relational databases, the role of new Microsoft products such as Azure and Analytic Platform System, the PowerX product line, and geospatial and machine learning visualization tools. Attendees will learn how to incorporate cloud-based analytics services into their healthcare analytics strategies.

Israel-based drug maker Teva will pay $512 million to settle charges that it paid competitors $200 million to delay rollout of a generic version of its sleep disorder drug Provigil. The company  also an unsolicited $40 billion bid to acquire generic competitor Mylan, which recently moved its headquarters to the Netherlands to avoid US corporate taxes and to take advantage of anti-takeover laws. 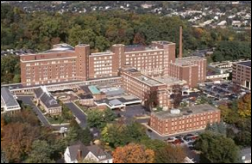 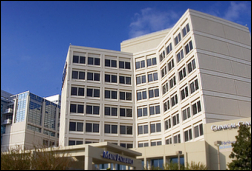 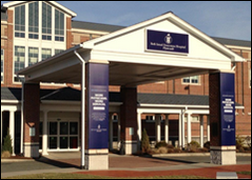 Erlanger Health System (TN) will implement an unnamed $100 million EHR, replacing the current system that the CEO says is the #1 source of hospital dissatisfaction. I found their RFI online, which says they are running Siemens Invision in the hospital and GE Centricity in most of the practices, but I didn’t run across anything that says which system they’ve bought. 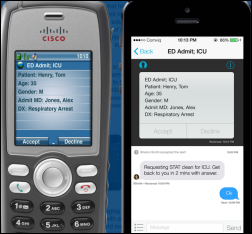 Extension Healthcare announces upgrades to its alarm management solution that include enhanced voice-annunciated alarms, enhanced RTLS-enabled care team availability, extended iOS and Android device support, and a way for physicians to view their patient’s care team members and contact them securely from outside the hospital.

LabCorp will launch a direct-to-consumer lab testing business to compete with drug chains and other competitors that have offered those services for years, many of which were using LabCorp to draw and process their samples. Patients won’t need a physician’s order if their state permits them to request their own lab tests. LabCorp hasn’t said which tests it will offer or how they will be priced. Sounds great for patient empowerment, but then again, so did the idea that drug companies should be allowed to advertise directly to potential patients.

Congress finally acts on a 2004 GAO recommendation to remove Social Security numbers from Medicare cards to prevent identity theft despite CMS complaints about the effort involved. The mandate was included in the SGR doc fix bill. 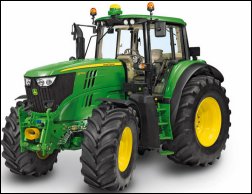 Software vendors always state that you legally don’t own their software – you’re just licensing it. Tractor maker John Deere takes it to the next level, telling the Copyright Office that farmers aren’t actually buying their tractors, they are instead purchasing an implied lifetime license to the John Deere software that runs them. It’s an important argument as companies try to favorably position their products as being software that end users or potential competitors can’t tinker with under the Digital Millennium Copyright Act. 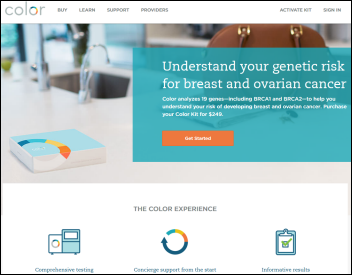 Color Genomics announces a $249 saliva test kit that detects 19 genetic markers for breast and ovarian cancer. The company, sensitive to the limited population for which screening is indicated and the potential patient concerns about the results, requires that one of its designated physicians order the test and then provides a board-certified genetic counselor to explain what the results mean. Similar tests were priced at up to $4,000 until the US Supreme Court denied a competitor’s assertion that nobody else should be able to perform such testing since it held a patent for naturally occurring genetic sequences such as the BRCA1 and BRCA2 genes. 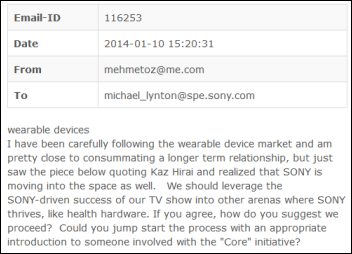 Emails exposed in the Sony Pictures breach show TV huckster-physician Dr. Oz trying to get Sony to sign him up as a pitchman for its wearables line, although his interest seems entirely commercial rather than medical.

Health Catalyst SVP David Burton, MD provides six predictions in an HFM Magazine article: (a) health systems and payers will address at-risk contracting as strategic thinkers, bet-hedgers, or ostriches with their heads in the sand; (b) population risk evaluation will shift from reviewing actuarial buckets to being driven by delivery systems that focus on improving specific clinical areas where they can perform optimally; (c) virtual shared accountability networks will form as ACOs and clinically integrated networks realize the cost of out-of-network services; (d) the emphasis on quality and safety improvement will spur development of analytic software and best practices starter sets; (e) providers will focus cost reduction efforts on the 80 percent of patients for whom evidence-based guidelines apply; and (f) sponsors will seek more flexible analytics systems that can respond more quickly to external changes.

Reporter Joe Goedert shares my disdain for turning marketing and PR people loose to make illogical decisions, specifically as related to the HIMSS conference: (a) CPSI not only changing its name questionably, but providing a confounding buzzword-heavy and thoroughly unconvincing explanation of the need to do so; (b) an unnamed analytics vendor that bussed reporters offsite for a roundtable discussion but then informed them that the discussion was off the record and nobody could leave until it was over, which means it was a complete waste of their work time; and (c) President Bush and HIMSS telling reporters 90 minutes before his keynote that his remarks and the softball questions asked by HIMSS CEO Steve Lieber (the guy who wrote him a huge check – his speaking fee is around $150,000) were off the record.

A vendor friend gave me a $200 Microsoft Band smart watch at the HIMSS conference. I gave it a try yesterday but put it back in the box after an hour or so. It is huge, bulky, and rigid (since it has a touch screen) to the point I couldn’t even get it under the cuff of my long-sleeved shirt and it barely fit around my wrist besides. It has a continuous pulse monitor, which is interesting but of marginal value for most people, and it pops up calendar and message alerts provided you’re willing to leave your phone’s Bluetooth turned on at all times. I gave it to an initially enthusiastic friend for a second opinion and got the same feedback: it’s cool, but not cool enough to be worth permanently hanging a heavy handcuff on your wrist even though it packs the heart sensor, GPS, light sensor, skin temperature sensor, and galvanic skin response measurement. I think my friend may end up reconsidering, though, after using it for a workout and seeing the results in Microsoft Health.

A judge issues a temporary restraining order that prevents Texas Health Resources from filing a worker’s compensation claim on behalf of Nina Pham, the Ebola nurse who is suing the health system. THR says such a claim should settle her issues and that Pham’s claims against it are unjustified since she’s an employee of one of its hospitals, not the corporation itself, and she’s not suing the hospital.

Weird News Andy says “Some day my prints will come – you can bank on it.” A NEJM case study profiles a woman whose chemotherapy treatments caused her fingerprints to disappear, which she discovered when her bank’s biometric ID system rejected her transaction.

I’m sure WNA would have caught this story: an Irish bank presses charges against customers who discovered that a temporary bug in the bank’s ATM software allowed them to withdraw more cash than they had in their accounts, inspiring one woman to make 115 ATM withdrawals totaling $60,000 in one afternoon to pay a Nigerian man to donate a kidney to her father.