I’m home but still playing catch-up with my HIMSS experiencing. As I was triaging my inbox, I found a gem about a new patient engagement product. It wasn’t a great release and didn’t even mention the vendor showing it at HIMSS. Who sends dry press releases during HIMSS and doesn’t even mention the conference? I’m sure the visibility on this one was pretty low. 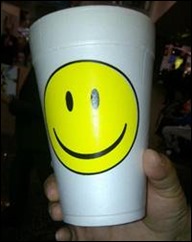 The highlight of my day Tuesday was running into a good friend while waiting for the show to open. His cup caught my eye and we had a nice catch-up until heading into the fray. The show floor was pretty busy. The creepiest booth was in the Interoperability Showcase, where one of the hospital displays had two people sitting in a hospital bed together. One was wearing a baseball cap and looked totally bored. The same display area also had a guy walking around in a hospital gown with a sign around his neck, pushing what looked like a vital signs monitor machine. Very strange. 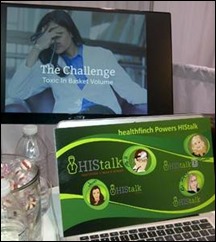 I saw HIStalk sponsor signs at Sunquest and Santa Rosa as well as at Healthfinch, where I had a great demo from Debbie. Healthfinch is one of what feels like only a handful of products that actually makes physicians’ lives easier, so I salute them. I stopped by the Enovate booth to see if they had anything new – we use their pediatric computer carts and they’re super cute. I was hoping they’d have a new animal offering this year and they promised to send some literature.

Venturing back into the bowels of the hall to the HX360 area, there were quite a few empty booths. One of my colleagues joked about creating a fake wireframe and sitting at their booth just so we could have a rest. We did use their chairs while I caught up on email. My goal was to check out MediVu, who had emailed me about their startup. Although their message said they had “no fancy giveaways or fancy parties to invite you to,” they were warm and welcoming as I chatted with CEO Robert Baldwin about their product’s dynamic icons. They did offer me some mints in a test tube, so they passed the southern hospitality test as well. I like to follow startups – I’m still following one that I first saw at HIMSS in 2011. They haven’t made the big time, but they’re still at it. 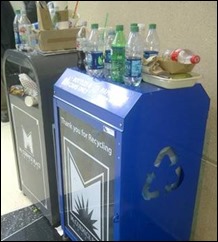 McCormick Place failed the southern hospitality test, with overflowing trash cans and recycle bins. They also committed the “here’s a trash can but no corresponding recycle bin” faux pas, which makes me crazy. It’s not like they’ve never hosted a convention before, you know? 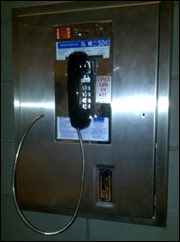 They did, however, have an actual working pay phone near the lower-level restrooms, so that’s something. 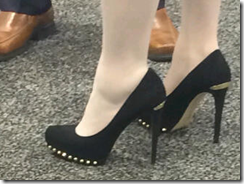 I spotted these shoes in the 900 aisle. Although they’re attractive, I think the gentleman she was talking to made a more responsible shoe choice.

I tried several times to connect with specific vendor reps as I roamed the aisles. My success rate was zero for three –people had stepped out of their booths and the response of those left behind was highly variable. IMO (Intelligent Medical Objects) gets the prize for best response. First they asked if I would like them to try to find the person or whether they could help me, then offered refreshments while they looked for him. The second two vendors will remain anonymous to protect the guilty – one didn’t bother to ask what I wanted, saying, “He’s out of the booth, but I can help you,” which wasn’t true since I was just there to see pictures of his new baby and catch up. The third just said, “I have no idea where he went, but it was a while ago” and left it at that. Vendors take note: you should have a plan for this because I bet it happens a lot. Other “booth teams behaving badly” included the guys from Intel, who were leaning on the door of the Medicomp booth and preventing people from getting in or out.

Humetrix had surfing rubber ducks at their booth. 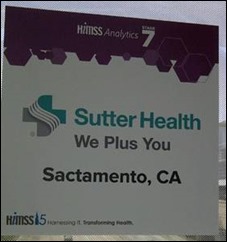 I headed to the HIMSS Bistro in the afternoon to stalk the CMIO lunch. This sign on the sky bridge reminded me of the need to proofread. It looked like the CMIO group was having a great discussion, but I was a little disappointed by the small number of women at the table, one of whom was Lorre. She has promised to send me her notes from the discussion – I bet it was a good one and would have loved to attend if there was any way to stay anonymous.

Epic had their traditional quirky art. I really like this guy, though – I would totally buy him. Insight Enterprises had a life-sized “Operation” game in their booth, but I couldn’t get a picture of it because of the crowd around it. I visited with my good friends at RemitDATA for a few minutes. They helped talk me off the ledge after I was accosted by aggressive vendor reps on the way there. One was stepping into the aisle, randomly shoving literature at people in complete disregard to their “no thank you” or corresponding lack of interest in their product. Another actually grabbed my hand and tried to pull me into the booth. When I told a colleague about it, he also commented on the aggressive nature of some of the reps, saying, “It was like they were on an attack vector.”

After that, it was time to head back to the hotel and change for the evening’s parties. The bus to the hotel was much faster this time, but still with the same people rushing the front as soon as it stopped. I got ready quickly and the cute boots I brought sat unused as I knew I wasn’t going to make it through the night without serious pain. I cabbed it over to the New Media Meetup at Gino’s East with a friend. The Chicago-style pizza was the perfect way to fuel before a big list of events, but I was bummed that I didn’t have a paint pen to add my “Dr. Jayne was here” to the walls. 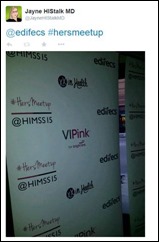 From there it was off to the “HIMSSandHers” networking event, sponsored by XX in Health and Edifecs. They generously donated $5 to Bright Pink for everyone who tweeted a pic from their event. Do you like my selfie? There were several other parties that night including Nordic and NextGen. I caught up some friends at the end at Tavern on Rush, where I was confused by the fact that they have a pair of sparkly Louboutin heels in a rotating Plexiglas box behind their bar. I’m sure there’s a story there. 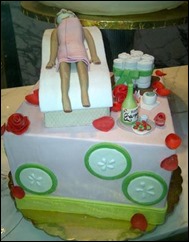 By the end of the night, I was ready for a trip to the spa as this bakery display advertised, but alas there was still more HIMSS ahead of me. Next up: I’ll post my HIMSS wrap-up after the weekend.