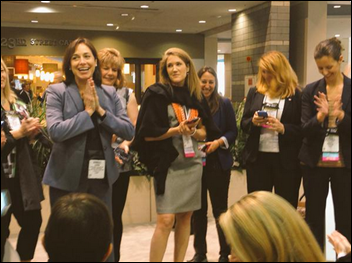 My third day at HIMSS started off with the #HITchicks tweetup at the HIMSSpot in between the exhibit halls. A group of about 50, including a smattering of men, attended to talk and tweet about the role of women as patient advocates and the highlights of HIMSS15 thus far. It didn’t take long for the “booth babe” conversation to take off, with one audience member shouting out HIStalk for bringing attention to the unfortunate trend a few years ago, and consistently calling out those companies that choose to hire pretty faces in tight-fitting spandex to shill their products. I thought it was especially fitting that me, Lorre, and friends of HIStalk added the badges below to our HIMSS15 wardrobes. Kudos to HIStalker Steve Blumenthal, business and corporate law attorney at Waller Lansden, for supplying them. He’s got a pretty sharp sense of humor for a lawyer. 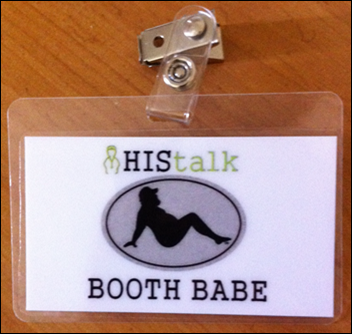 The tweetup had not one but three highlights for me: University of Michigan Hospitals and Health Centers CIO Sue Schade – CHIME’s CIO of the Year – stopped by the voice her support for the group. Kym Martin, a four-time breast cancer survivor and patient advocate (not to mention the lovely wife of HIStalk Blues Brother Ross Martin, MD), shared her story of patient advocacy and journey as a four-time breast cancer survivor. Last but not least, ONC National Coordinator Karen DeSalvo, MD stopped by to share her experience as a woman who has worked in academia, public health, and now on the national political stage. 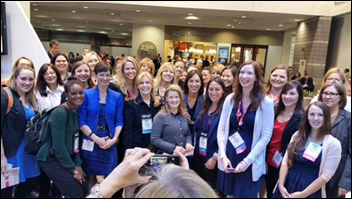 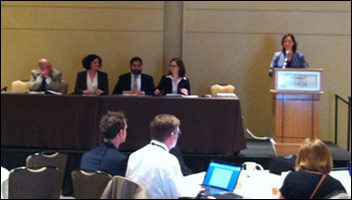 My next stop was the ONC press briefing, where staff gave a run down of the office’s accomplishments over the last year. Interoperability and partnerships were definitely the overarching theme. DeSalvo took the briefing as an opportunity to announce the availability of $1 million in grant funds to support health IT projects for the Community Interoperability Health Information Exchange Program. The program will award funds to 10 organizations, including those that are not eligible for MU incentives. Applications for the program are due June 16.

We didn’t get too far into the Q&A before someone brought up the patient engagement crowd’s (including Farzad Mostashari, MD’s) uproar over the decision by CMS to change the Stage 2 requirement so that providers now have to show that one patient, rather than 5 percent of their patients, accessed their information online. DeSalvo calmly stressed that ONC is absolutely committed to ensuring that patients have access to their health data, adding that she is encouraged that a dialogue is taking place on the issue. She also reminded reporters that this is a proposed rule, and that formal comments on the rule are encouraged. I understand why some might call this a step backward for the MU program, but I can’t help but think many providers are breathing sighs of relief. You can’t force people to use the Internet, especially those that don’t have access to a computer or reliable WiFi. As DeSalvo reiterated throughout her response to this question, the true challenge will be a cultural one, not necessarily one solved by technology, which is why it’s so important for the ONC to partner with other federal agencies as they attempt to evolve their focus beyond EHRs. 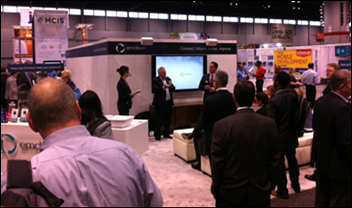 My next stop after a quick lunch in the press room as at the Emdeon booth, where I moderated a panel discussion with Emdeon’s Gene Boerger and CareCloud’s Albert Santalo on fueling product innovation with big data. I was slightly jealous of the stylish and super-comfy shoes the Emdeon staff were sporting, not to mention the cushioned carpet in their booth. I enjoyed wandering around both sides of the exhibit hall afterwards, snapping pictures of those that had unique designs, catchy marketing gimmicks, and bustling crowds. 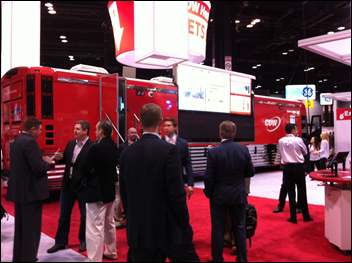 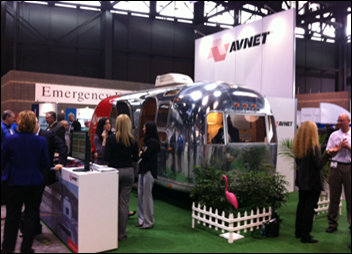 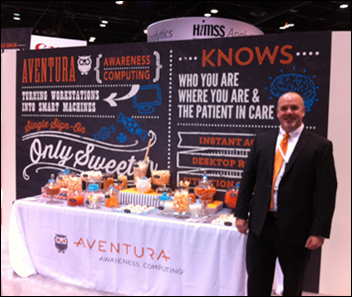 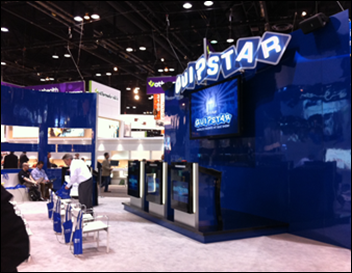 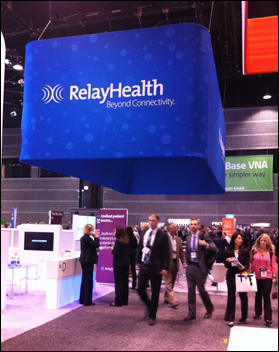 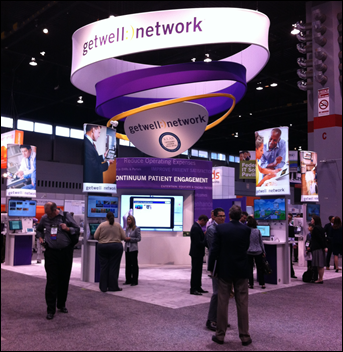 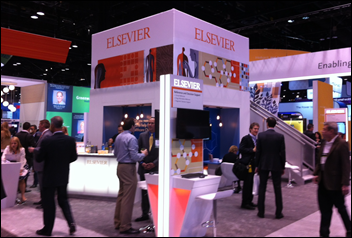 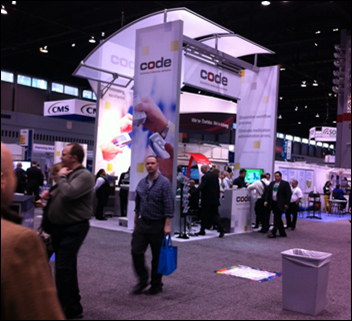 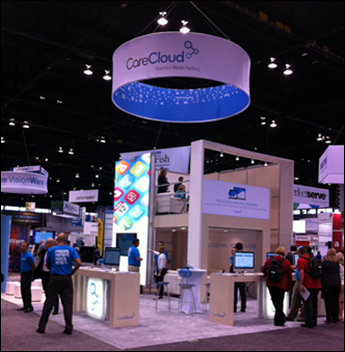 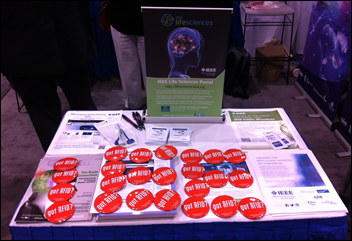 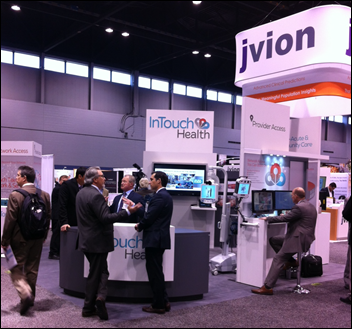 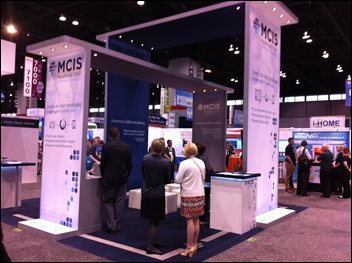 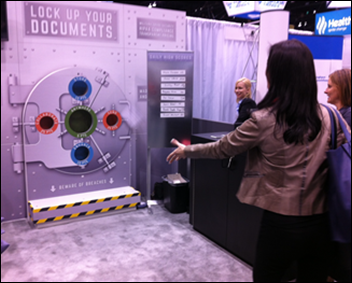 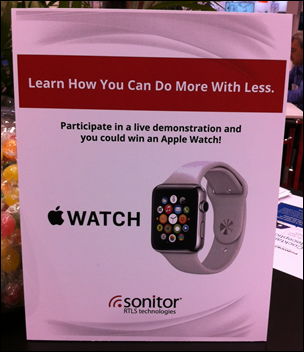 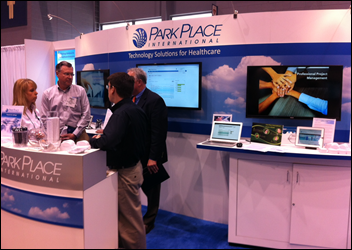 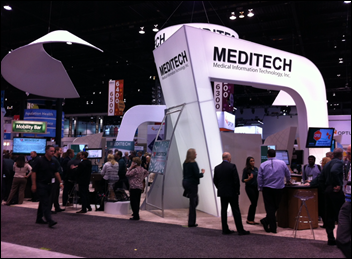 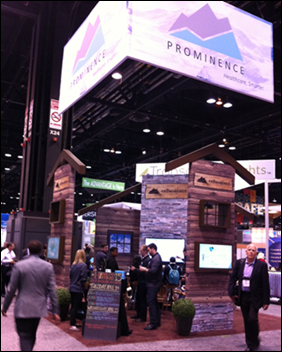 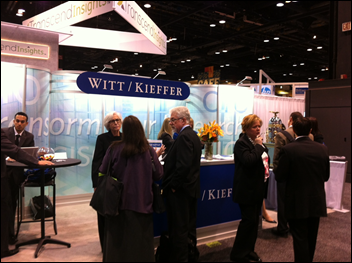 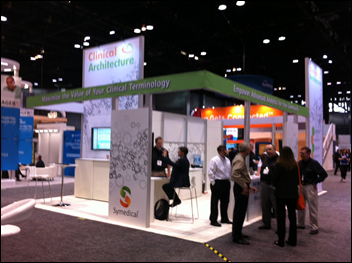 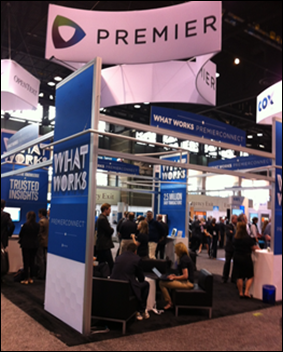 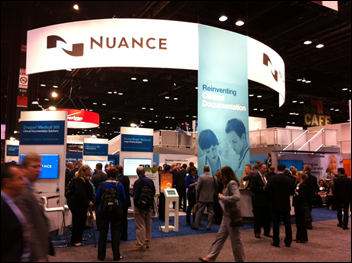 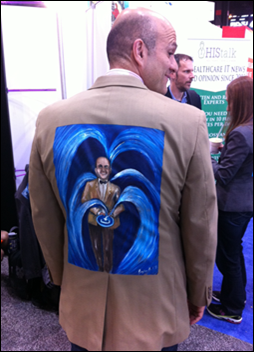 My remaining time at the conference was spent at our booth, where I got the chance to witness The Walking Gallery converge, courtesy of HIStalk’s good friend Regina Holliday. I especially loved the vibrant color of Farzad Mostashari, MD’s jacket. Let the data flow …. 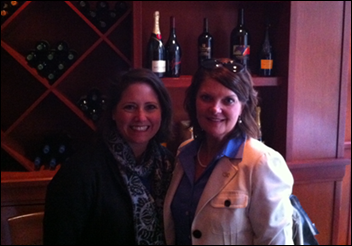 My day concluded with a quick stop by the Patientco party, where I ran into Caroline Wood and Sherry Farrugia of Georgia Tech. Talk soon turned to a company called Evidation Health, launched last month by GE Ventures and Stanford Health Care to improve health outcomes with evidence-based digital health tools. Their excitement about the startup was palpable, so I may have to crash the road trip they’ve got planned to go out there later this year. 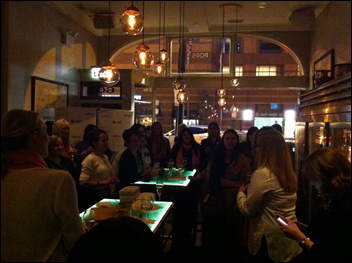 After that it was on to the Edifecs #HIMSSandHers meetup, where I happily talked shop with Politico’s Ashley Gold. I left with a T-shirt and a selfie stick, my favorite piece of HIMSS swag so far. Despite being thoroughly exhausted, I’m already looking forward to seeing what my final day of HIMSS will bring.