From Canuck: “Re: British Columbia EMR. Big implementation gone sour with a reported $125 million spent so far with nothing to show. This story barely touches upon the issues encountered thus far, issues we’ve all seen in other similar projects.” British Columbia parts ways with IBM two years into a 10-year, $700 million project that remains 85 percent incomplete. The health minister still expects to get the project done on time and budget, which is ridiculously optimistic given government IT performance worldwide even when it doesn’t involve dumping the prime vendor. Perhaps the US Department of Defense should notice that its big EHR bidders haven’t performed well in comparable but much smaller projects outside the US, although fault is often hard to assign to either government or prime bidder incompetence. I can’t name a single big government IT project that was delivered on time and on budget, but I can name a bunch that were abandoned with no benefit whatsoever.

From Due North: “Re: NantHealth. Cancelled their HIMSS conference presence at the last minute, eating the huge deposit. Everyone I knew there is gone.” Unverified, but new President Bob Watson was available only in the private meeting rooms over by HIMSS Bistro, which I happened to see while having a lakefront lunch there today.

Here’s an interesting rumor I heard today from a fairly good source: Karen DeSalvo will reportedly leave her HHS position in a couple of weeks. I hope it’s not true because she’s a credit to public service and has in her short tenure done a very good job in walking the ONC tightrope that tries to balance innovation, public health, and Meaningful Use. The source suggested that Micky Tripathi turned down an offer to serve as interim, which would be a surprising offer given that he’s brilliant but not an MD like all of the National Coordinators so far. I’m almost always a cynical sourpuss when it comes to industry leadership and yet I find myself hoping she not only continues as National Coordinator,  but is given more federal responsibility despite serving within a lame duck administration. The rumor wasn’t clear, so perhaps there’s a bigger role for her within HHS, such as with CDC or NIH. Or maybe it’s not true at all. Feel free to ask her after her Thursday morning HIMSS keynote if you’re still in Chicago. She gets my vote for whatever she wants to do, as does her predecessor Farzad. 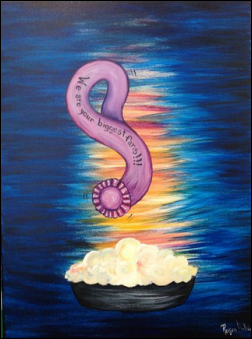 Here’s Regina Holliday’s latest artwork, which she painted right in the HIStalk booth this week. It’s in honor of HIStalkapalooza, with the pie representing the one Judy Faulkner presented to Jonathan Bush and the beauty queen sash indicating, “We are your biggest fans,” which Regina said she heard repeatedly from folks at the event in reference to HIStalk.

I met one of our HIStalking scholarship winners today when Lorre introduced me to Mélanie Péron, our representative from Paris. She cried, hugged, and expressed endless appreciation for the opportunity to attend the conference representing patients. She triggered instant insight on what it takes to be successful as a patient advocate. We healthcare people are used to geeks calmly presenting reams of worksheets, but we are justifiably easily moved by people who can tell a heartbreaking or inspirational story, who get fighting mad at injustice or incompetence, or who tug at our hearts with sadness when the industry in which we work in caused harm to their loved ones or failed to prevent it. We all know it could have been us our our family members on the wrong end of a bad but unfortunately not uncommon healthcare experience. Maybe that handful of people we brought to Chicago are dwarfed by the 43,000 others here who are more interested in finding expensive dinners or selling systems, but their activism keeps us all honest and pushes our faces to the mirror of what’s wrong with healthcare that only we can fix. It’s brilliant. I’m glad they were in Chicago this week and I’m anxious to hear their thoughts about the big business aspects of a sometimes indifferent care delivery system that they’ve now witnessed firsthand. 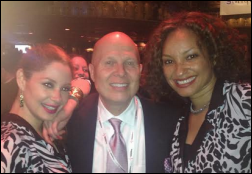 Our HIStalk friend Marty Mercer says HIStalkapalooza is the best party he’s ever attended, possibly because he was being fawned over by two members of Party on the Moon. 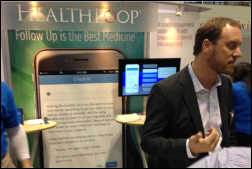 I started my day with a visit with HealthLoop. They were handing out badge ribbons indicating “Empathologist” because they create electronic connections to patients that make them feel connected and engaged in a high-touch way, including scripted electronic check-in. The messaging extends the patient experience before and after the planned encounter, such as sending pre-surgical patients a daily reminder by phone or email to get up and walk around or otherwise prepare for their procedure or to recover from it afterward. It boosts patient satisfaction while delivering patient education. It can even route patients automatically to doctor rating sites and collect survey information for patient-reported outcomes. It was a quick but positive look.

I then stopped by Medfusion, which offers a free “portal of portals” in aggregating multiple portals into its vendor-agnostic one. It was pretty cool in that it can tie together multiple portals to look like a single one to the patient, displaying everything via a slick app. Vendor- and provider-specific portals are really ridiculous in this day and age where every patient would have to manage 10 of them to keep up (and instead never bother to log on at all), so combining them all visually is about the best we can hope for at present.

Next I visited Influence Health, whose EHR-agnostic product brilliantly combines patient engagement, provider marketing, and a patient portal. Consumer choice means providers need to selectively market their services and it’s interesting how Influence Health does it with a consumer user interface that is as familiar as Facebook and Outlook. The company seems to get the connection between clinical patient engagement and provider marketing better than anyone. I only saw a short demo, but it looked solid and smart to me.

A reader asked me to check out Patient Route, way back on the no-man’s land of the HX360 pavilion (which was maddeningly difficult to navigate even with booth number in hand – it literally took 20 minutes to find them even though I was within 100 feet of their little stand). They do some kind of predictive throughput and staff modeling based on historical and real-time information, although I have to say the pitch I was given was not particularly well thought out or informative. About all I heard is that the Brigham is using it to push more surgeries to their suburban hospitals where they get paid more for the same work and don’t have capacity limitations. They didn’t give me enough information to form an opinion.

I checked out MedCPU and was guardedly impressed. The company’s clinical decision support product brings in the usual HL-7 data but also decomposes the free text information that forms most of the available patient data, using natural language processing, text extraction, and a clinical context engine. It turns all of that text into discrete information that is used to provide EHR warnings via a Citrix DLL, so that it sits in the EHR window but separate from it and thus requires no integration effort. It gives clinicians warnings of conditions that are far too subtle for normal field-based CDS to detect. My “guardedly” adjective refers only to the fact that I want to talk to a live site, which the company is arranging. If it works as billed, it’s really well beyond the rather primitive CDS such as drug-drug interaction warnings and drug-lab contraindications. Eyal Ephrat, MD has a track record that instills trust, having founded E&C Medical Intelligence (now PeriGen, which does great work). He and I got a bit deep into the bowels of their patented technology and I want to learn more from actual users.

A reader suggested I look at Innovatient, which offers in-room entertainment, patient assignment, and some nurse call system overlap. I can’t say it struck me as offering anything not already readily available from Oneview, GetWellNetwork, and other vendors, but they have 10 live sites and maybe there’s more than I noticed.

Another reader wanted me to look over Patientco. I can’t get too excited about patient bills and payment options, but if I did, I would love it. They print easily understood bills (designed using sound psychological principles right down to the colors used) and make it easy for patients to settle up online. Patientco is about as cool as billing can get and customers are seeing higher collections and patient satisfaction from using it.

Yet another reader asked me to check out Healow, part of eClinicalWorks. I don’t have much of a reaction – it seemed to be a basic phone-powered portal into a provider’s eCW system with some wearables connectivity built in. 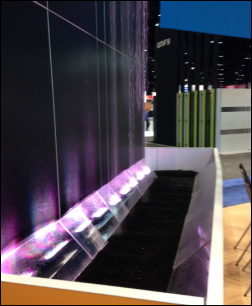 NextGen had this cool, computer-controlled waterfall that actually spelled out words and presented pictures using only water patterns. It was bizarre but fascinating.

Today’s MedData scones: banana-maple and pumpkin. My Fitbit can’t count enough steps to offset the calories I took in enjoying them. 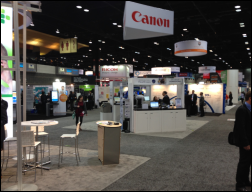 HIMSS requires exhibitors to refrain from heading out before Wednesday’s 4:00 exhibit hall close time, but plenty of them (HIStalk included) were boxing up well before then. 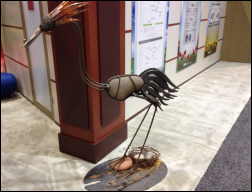 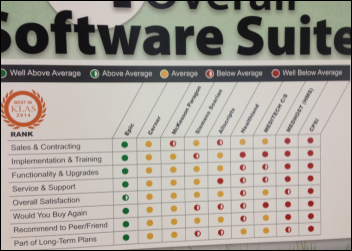 Epic’s KLAS results posted on their booth walls shows Cerner second with no green at all, Allscripts flailing around in the middle spot, and Meditech dropping precipitously toward the all-red CPSI bottom feeder level.

This is pretty amazing. Centura SVP/CIO Dana Moore met with interested vendors today at a price of a $500 donation to DonorsChoose in return for 20 minutes of his uninterrupted time (which was matched by a generous, anonymous vendor so that we raised $6,000 for needy classrooms today). I expected Dana to nod politely and check his watch constantly from boredom, but instead he told Lorre that it was the best two hours he’s ever spent at a HIMSS conference. Every one of the six vendors had a solution to one of his current problems and one of them had a solution that he didn’t even know existed. His positive experience makes me think we should replicate it on a larger scale at some point, carefully matching provider executives with vendors based on needed, available solutions.

Thanks to DrFirst for providing photography and videography at the event. I’ll probably turn some of the many great photos into a video slideshow or something since it’s great for folks to see themselves having fun. As much as I fussed for many months about the effort and personal cost exposure of running the party, it felt worth it to see the crowd responding so positively to the HISsies and the band. 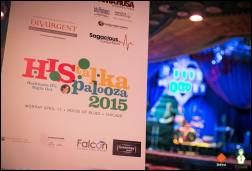 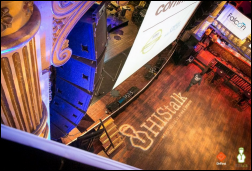 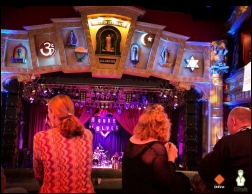 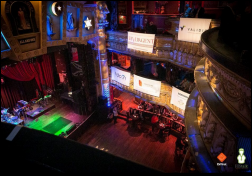 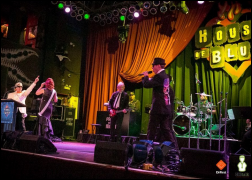 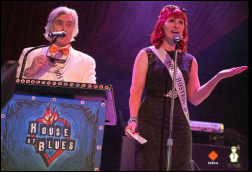 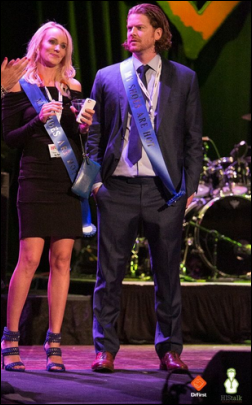 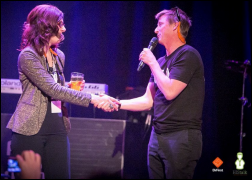 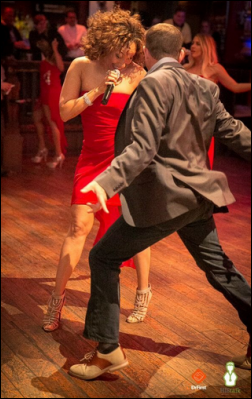 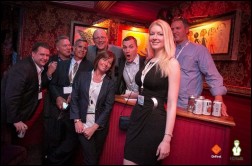 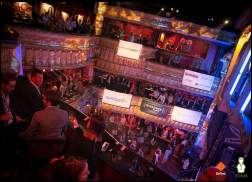 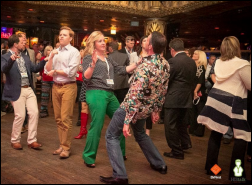 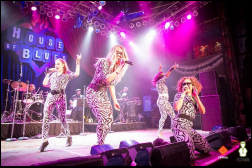 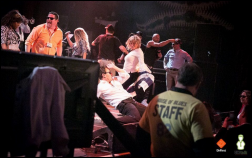 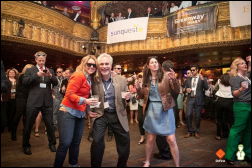 I’ll get back to a more regular posting schedule since I’ll pass on returning to the conference Thursday. It’s been a long week.