HIStalkapalooza took up a lot of my time yesterday, so I didn’t even have time to post. This will be a dribs-and-drabs version – I’ll have more time the rest of the week to get organized. Let me know if there’s something I should make sure to see since I’m just flailing around for the most part.

From Anonymous Vendor President: “Re: Dana Moore and DonorsChoose donations. We will anonymously match whatever total you raise up to $5k. Let’s make this thing really work! Many of my family and countless within our company have ties and heartstrings attached to the cause.” Centura SVP/CIO Dana Moore will be in our booth Wednesday, meeting with vendors for 20 minutes each in return for their $500 donation to DonorsChoose. I’ve scheduled six sessions with him so far, meaning with with the very generous anonymous matching funds, we’ll be donating $6,000 for individual classroom projects via DonorsChoose. I have a bunch of teacher thank-you emails to get through from the projects already funded. Next up is the fun of funding new projects. Thanks to everyone involved.

From Kaboodle: “Re: MedStar in Maryland. You failed to mention their GE Centricity EHR crash, where all clinics were down and back to paper. But, but mind you, care was not affected!” Unverified. I haven’t heard anything about it.

I haven’t had much time to do the post-mortem on HIStalkapalooza since I didn’t get back until well after midnight. House of Blues was perfect and ran things with great skill, the food and bar service was really good, and the band was as outstanding as I remember them from last year. I was backstage the whole time so I didn’t experience the event as an attendee this time around, which I sort of regret, but I could feel the energy and excitement. Some notes: 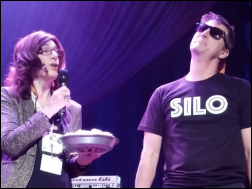 Neil Versel took some good pictures of the Judy and JB show, even though he annoyed me by dismissively referring to HIStalk as the “National Enquirer of health IT.” 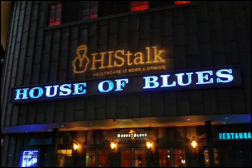 A nice HOB exterior shot by Rudy Flores. The stencil over the light that shines the logo — I now know having ordered three of them for this event — is called a “gobo,” just in case you want to increase your vocabulary.

All day (I think): Regina Holliday will be painting
11:00 Funny lawyer Steve Blumenthal will be handing out swag and dry humor.
2:00 NVoq will hand out Garrett Popcorn (it’s the great Chicago kind that costs a fortune in the airport).
3:00 Your HIStalkapalooza host Barry Wightman will be autographing copies of his book “Pepperland” (which I enjoyed a lot).
4:30 The Walking Gallery will meet.

I forgot that we intended to auction off Regina’s HIStalking original painting from which we made the scholarship winner tee shirts. Make Lorre an offer if you are interested. Maybe she can post the highest current bid on an index card underneath it or something.

My Fitbit shows that I walked 12 miles Monday. It felt like I wasted a lot of time just walking around, but that’s par for the course on the first day of the conference. 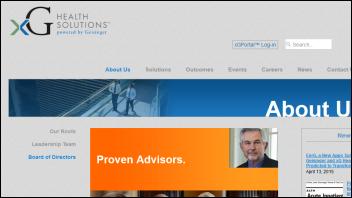 The folks at XG Health Solutions (a new HIStalk sponsor that I haven’t announced yet) invited me to a breakfast briefing covering their new apps. It’s a Geisinger spinoff that will sell software based on work done there to present clinicians with a better view of EHR data and collect additional information to make it easier to quickly understand patient problems and concerns and to document additional specialty-specific findings (rheumatology is the first one). Partnerships were announced with Epic, Cerner, and Athenahealth, whose EHRs will exchange information with the XG apps using SMART on FHIR. They have four apps going to beta testing by summer and plan to roll out six over the next 18 months.

From the hallway conversations I heard and my own opinions, here are the positives: Geisinger has developed a lot of expertise and content that’s less ivory tower than most big academic medical centers, they put some thought into involving the patient in the use of their apps, and the SaaS-based subscription means new best practices can be put into place quickly. Negatives: the company has significant venture capital ownership (they aren’t Geisinger, in other words), you might suspect that Geisinger applied soft pressure to the newly named EHR vendor partners to get on board with uncertain future commitments, and so far they’re a company that hasn’t done much to dent the market other than to do Geisinger stuff and make announcements. Success in commercializing hospital software is elusive, and while Version 1.0 is easy, it’s Version 2.0 that gets ugly with upgrades, design decisions, and testing. The first non-Geisinger betas will be important. 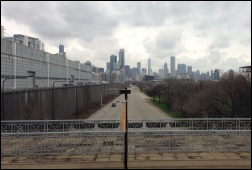 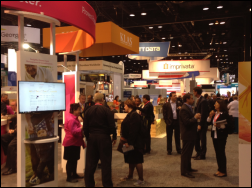 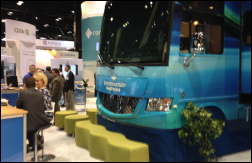 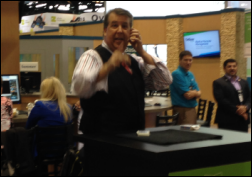 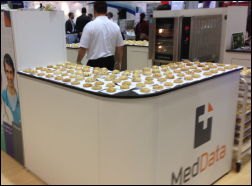 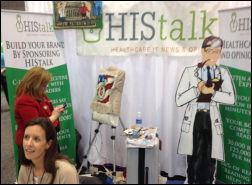 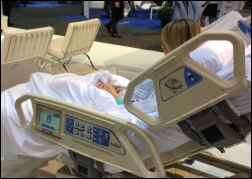 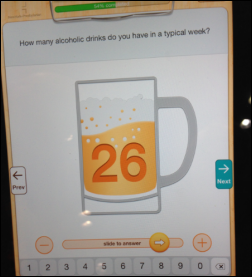 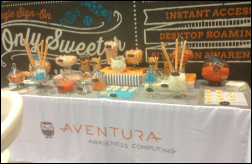 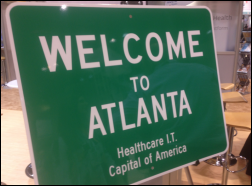 Some notes from my circuits around the exhibit hall (actually both of them – it’s a split hall that ensures confusion and uneven booth traffic). My badge is intentionally unimpressive to vendors, so I get the same treatment as everybody else.

The outcome of dueling lawsuits between Allscripts and Medfusion may hinge on interpretation of the use of an Oxford comma in their agreement, which is pretty fascinating. 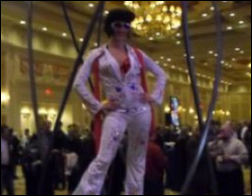 A reader wants to know if anyone else thinks that having costumed female entertainers at the HIMSS opening reception crossed the border into sexism territory. I wasn’t there, but if they didn’t have any men, that might at least make me think about it. I noticed fewer obvious booth babes in the hall this year, so maybe the “skin to win” sales approach is finally and deservedly dying off. It would seem especially inappropriate to have a provocatively clad model pretending to be a company rep in trying to get the attention of a female CEO, CIO, or CMIO.

A terribly written and insight-free Forbes article click-baitingly titled “Two Dirty Little Secrets About Electronic Health Records” says EHRs are “a threat to freedom of speech and academic freedom” in claiming that EHR vendors (and Epic specifically) requires customers to sign non-disparagement clauses. The author works up righteous indignation for Bob Wachter, MD, who the author says had to get Epic’s permission to write about a UCSF medication error and to use Epic’s screenshots to illustrate it. The problem is the author just made stuff up rather than asking anyone involved and Bob had to correct him – Epic doesn’t include non-disparagement language in its contracts, although the screenshot part is true and Bob’s not thrilled about that (he emailed me to clarify that the author was wrong on the first point and has since changed the story). The second big secret is that EHRs are designed to help with billing and management. The author magnanimously proclaims that, “I’m not against EHRs,” which would be comforting except nobody’s ever heard of him and his mastery of the subject is clearly minimal.

That’s all for now. I’m headed over to McCormick Place later than I’d like.