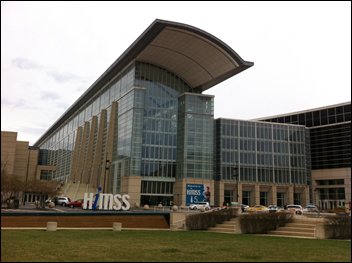 Ah, HIMSS. This year marks my fifth, and like the previous four, I doubt it will disappoint. There’s just no other event that can offer up such a unique mix of nonstop networking, educational sessions catering to every HIT acronym under the sun, exhibit hall #HIMSSanity, sleep deprivation, and over-the-top caffeine consumption. I genuinely enjoy it every year, mainly for the relationships made and fostered. HIMSS 2010 in Atlanta was, in fact, where I first heard about HIStalk and Mr. H’s predilection for walking around with a paper bag over his head to keep his anonymity in tact.

Speaking of Atlanta, my day started well before the sun rose on an overbooked Delta flight full of folks en route to HIMSS. Honeywell, Oneview Healthcare, Patientco, McKesson, and Gozio Health were all represented. I didn’t even attempt to enter the always notoriously long taxi queue at Midway in Chicago, instead opting to reach my hotel via a 20 minute subway ride that cost all of $3. I found myself further impressed with Chicago when the clerk at my hotel allowed me to check in at 10:30 a.m. A 30-minute lie-down after a 4:45 a.m. rise wound up being essential to staving off the aforementioned #HIIMSSanity. 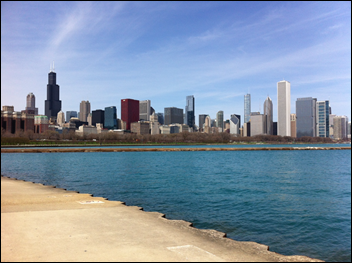 Refreshed, and with a few hours to spare, I spent time wandering around Chicago’s Museum campus and nearby lakefront. The weather was slightly warm and sunny, with just a hint of the city’s famous wind. I had a thoroughly enjoyable time eating my first “Chicago-style” hot dog while people-watching on a park bench. It’s not often that I get to while away an hour and a half doing not much of anything. The lure of the convention center came soon after lunch, and I found myself walking three short blocks to grab the shuttle to McCormick Place. (Is it just me, or does the shuttle drop off in the dark bowels of the trade center remind anyone else of the Lonely Mountain?) 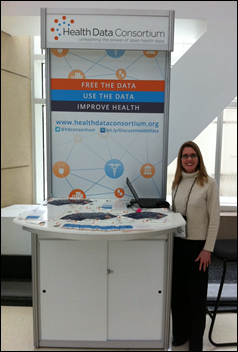 After grabbing my press pass, I ran into Sara Zellner at Health Data Consortium giving away “I Love Health Data” buttons. (I’m a sucker for fun “pieces of flair.”) She reminded me that HDC’s annual Health Datapalooza is coming up at the end of May in Washington, D.C., with HHS Secretary Sylvia Burwell and Acting CMS Administrator Andy Slavitt scheduled to speak. 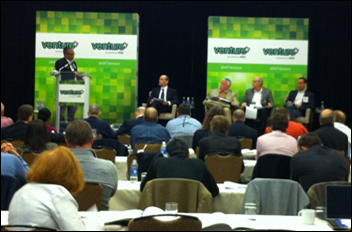 From there, it was a quick quarter mile (kidding, it was probably only a fifth) to the Venture+ Forum, a day-long event featuring startups pitching in three-minute lightning rounds to a panel of devil’s advocates. I came in at the tail end of the forum, only getting to see full pitches from Heal, Medivizor, Sensentia, and Open Health Networks. Heal’s app for on-demand house calls caught my eye, as did the realization that anyone thinking of speaking in public should avoid saying “um” at the end of every sentence and remember there is a slide deck to scroll through at the beginning of the presentation, rather than halfway through. It seemed like the Forum was at capacity of around 150 or so, which probably means it will warrant a bigger space next year. 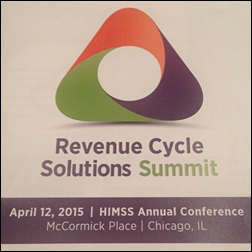 A number of other pre-conference symposia took place on Sunday, including the inaugural Revenue Cycle Solutions Summit. Patientco’s Josh Byrd sent me this report:

The Revenue Cycle Solutions Summit provided over 200 attendees with thought-leading presentations from providers who are paving the way for what the revenue cycle of the future will look like. The common thread weaved throughout was a focus on patient-centered care after the episode of care. Highlights included:

Josh told me that the attendee mix was mostly CEOs and CIOs, so it will be interesting to see how many CFOs attend next year’s event. Could HIMSS be looking to give the HFMA ANI conference a run for its money? 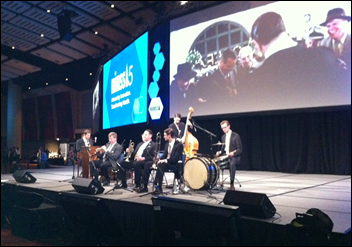 After a quick change into Roaring 20s-inspired flapper garb, I put in an appearance at the opening reception, which I found surprisingly well attended given the amount of smaller HIMSS symposia receptions taking place at the same time. The jazz band was great, and definitely got me excited about performances by Ross Martin, MD and Party on the Moon at HIStalkapalooza. 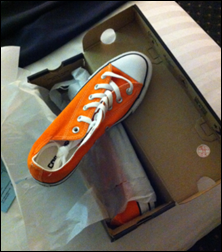 My next and final stop of the evening was the HIStalk Sponsor’s Reception, which was a great opportunity to meet and greet the people behind the companies whose support makes HIStalk happen. I can’t thank them enough. Special thanks to the lovely folks at Aventura who gifted me with these classic kicks, which I may have to put on tomorrow once the HIStalkapalooza red carpet shoe-judging festivities have concluded and the dancing is ready to begin. 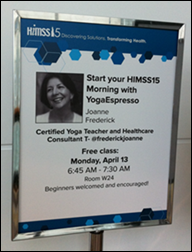 Stay tuned for more updates. I’m off to get some shut-eye, still debating whether or not to start my morning off with some YogaEspresso. Down dog and healthcare IT seem like a natural combination, don’t you think?

Get HIStalk Practice  updates.
Contact us online.
Become a sponsor.