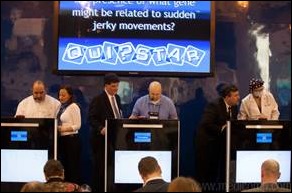 For those readers attending HIMSS who might want to check out my shoes, you can catch me at the Medicomp Booth (# 2318) on Monday afternoon. This year’s celebrity contestants include Jacob Reider, Lyle Berkowitz, and Ross Martin. Medicomp will again be making donations to our favorite charities and I’m honored to have been invited back. They offered bodyguards to protect my anonymity as well as a swanky backstage green room, which should make for a fun afternoon.

After I get my game show on, I’ll be heading over to the Meditech booth for the official launch of their Web Ambulatory product. Quite a few legacy vendors seem to be trying to embrace the cloud, so I’m eager to see their take on it. Plus they’ve promised champagne, although I wonder if they’ll be sneaking in the good stuff given the typical trade show restrictions on food and beverage service. I spent a fair amount of time sorting through press releases and booth invites today (nearly all of them via email) and can report that misspellings of HIMMS are leading HIPPA 3 to 2. I’m definitely not putting those organizations on the priority list. 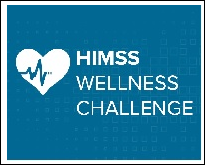 I received the final instructions for the HIMSS Wellness Challenge. It will be measured in steps taken on Monday and Wednesday and in distance walked for Tuesday. Entrants must be present at the Connected Patient Learning Gallery to win – times are 5:30 for Monday and Tuesday and 3:30 for Wednesday. Those times border on my social schedule, so I think I’ll have to take a pass. If you decide to hang in there, the prizes are $300 gift cards.

Our leadership is hoping that CMS uses HIMSS as the prime time to release the rule making official a 90-day reporting period for 2015 Meaningful Use. Regardless of when it happens, I suspect that quite a few organizations will be planning to attest as late as possible so that they maximize their timeframe for upgrades and workflow changes they might need to be successful. We’re historically conservative and planned for full-year reporting, so our monthly status reports continue to be amusing reads as providers have decided they don’t need to be compliant just yet. 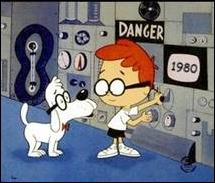 I had a brief trip in the Wayback Machine this week when our newly-acquired community hospital started including me on its email distribution list. Apparently they can’t convince their physicians to actually use electronic charting, so they’re going to pilot scanning hand-written progress notes starting next week. They reminded physicians to “change the dial on the charts to yellow which will alert the staff to scan the note.” It’s been so long since I actually used a paper chart, I had forgotten about the colored dials and sliders we used to let unit secretaries know we had written orders.

On Monday, CMS opened the Dispute Period for Open Payments. Drug and medical device makers are required to report payments made to physicians and teaching hospitals and physicians have the opportunity to review the data for accuracy. The review period is open for 45 days. Although I have all the logins, I discovered reviewing the data isn’t as easy as it sounds. Physicians have to register for both the CMS Enterprise Portal and the Open Payments system. Enterprise Portal accounts are locked if there is no activity for 60 days and deactivate at 180 days. Based on other demands for our time, I doubt that too many physicians will be personally reviewing their data. Maybe CMS could try sending us our data using DIRECT addresses.

Earlier this week, Mr. H mentioned the ECRI Institute list of top patient safety concerns. Of course health IT-related issues are hot topics, but I was surprised to see managing patient violence as number three. Our hospital was on lockdown multiple times last fall and it’s always unsettling, but the high-profile events aren’t the ones I’m most worried about. I’ve been threatened several times by patient family members. I suspect some of our outlying physicians may have firearms at their offices despite our official ban.

What are you doing to keep your staff and patients safe? Email me.