The Federal Trade Commission likes ONC’s interoperability roadmap for the most part, but observes that interoperability will continue to be hampered by the competitive interests of providers and vendors. It also gently warns ONC that its strategy of using policy and funding levers to create interoperability demand might encourage less innovation than if the government instead created market forces as a payer (i.e., Medicare). FTC says that its experience shows that vendor participation in creating standards and certifying products causes anti-competitive behavior, such as withholding certification from a competitor, excluding new products from meeting prior standards, rigging the standards-setting organization with vendor-friendly members, and not paying enough attention to patient rights. FTC is also worried that vendor-recommended standards will lock consumers onto a platform that may have been created with the intention of stifling competition. Lastly, FTC is concerned that any standards ONC chooses will be treated as law, so if they really want to get into the standards-setting business, they had better choose carefully. 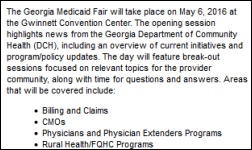 From Pulpit Bully: “Re: Georgia Medicaid Fair. Here’s a free training event for those who want to get some insight into why our industry is hopelessly complex. I hate to sound like a curmudgeon, but this is an ENTIRE DAY of sessions about how insurance companies and the government make it difficult for people to manage their health.” It doesn’t sound like a target-rich environment for booth swag.

From Nasty Parts: “Re: CPSI. Heard there is an ‘all hands on deck’ meeting on Monday and they have rented a large facility. Wonder why would they do this during the HIMSS conference?” Unverified. At least some of their hands won’t be on deck in Mobile unless they vacate their HIMSS exhibit. It’s probably their user group meeting in Sandestin, which is also next week.

From Beaker: “Re: self-ordered lab tests. This should end well.” A just-signed Arizona law that will take effect in July will allow people to order their own lab tests without a doctor’s involvement. It was pushed by Silicon Valley lab high-flyer Theranos. I like the patient-centered aspect, although certainly Theranos has executed a smart business coup in removing physicians as its sales bottleneck. The obvious unknown is how consumers will react to receiving abnormal results – treat themselves inappropriately, pester their doctors, or demand that their insurance pay for tests of questionable medical usefulness. Doctors serve both as clinical and utilization gatekeepers and it’s a brave new world when those roles are removed and consumers are turned loose with minimal knowledge.

From Epic Doesnt Market: “Re: Epic marketing. Not sure if you’d consider the $2 million that Epic pays KLAS as marketing, but I do.” I would. Every company does marketing. Epic is different only in that it’s a bit lower key about it and it doesn’t place actual ads most of the time. Marketing isn’t the same as advertising, as everybody who has taken an MBA marketing class knows, and while Epic does little or none of the latter, it does quite a bit of the former under the label of “events.” It milks its KLAS results hard, as anyone who has seen the giant displays plastered on its HIMSS booth knows, and those billboards didn’t just jump up on the wall without help.

From Epic Does Too Market:  “Re: Epic marketing. If they don’t market, someone forgot to tell their employees, or maybe they don’t control the ones who have left. At least eight former Epic employees identify themselves as marketing people on LinkedIn and one career marketer (who has since moved to another vendor) says she reported directly to Epic’s CEO. They’ve had several spokespeople quoted. I see the work Epic produces on their website, fact sheets, slide presentations, dance numbers, etc. Whether they call it marketing or not, they must have full-time people engaged in producing it all.”

Here’s an overview video of Practice Unite that I found on YouTube.

Every year I tell vendors how stupid they are in listening to clueless marketing people who advise them to hold their big announcements until HIMSS conference week, which ensures they’ll sink without a trace in all of the confusion and real news happening there. Finally they’re seeing the light and making significant announcements this week instead. Reporters are too busy partying excessively or wasting time doing cookie cutter executive interviews to pay attention to self-serving HIMSS week announcements.

Dana Moore, SVP/CIO of Denver-based Centura Health, has generously offered to collaborate with me on a purely charitable HIMSS conference project. He’ll be in our booth (#5371) Wednesday morning 10 until noon. Vendors (or anyone else, for that matter) can have 20 minutes of uninterrupted one-on-one time with Dana in return for a $500 donation (I chose that value) to DonorsChoose.org since Dana and I both like funding education projects. Then, he and/or I will recap his impressions about your pitch right here on HIStalk to a pretty big audience. Contact me if your company is interested and we’ll book a time. It’s a heck of a lot cheaper than trying to get his attention and then flying to Denver to meet there, you’ll be benefitting a classroom, you’ll get prime HIStalk real estate, and Dana just might be interested enough in your pitch to want to speak further (startups take note).

April 22 (Wednesday) 1:00 ET. “Microsoft: The Waking Giant in Healthcare Analytics and Big Data.” Sponsored by Health Catalyst. Presenter: Dale Sanders, SVP of strategy, Health Catalyst. Microsoft has been quietly reengineering its culture and products to offer the best value and most visionary platform for cloud services, big data, and analytics in healthcare. This webinar will cover the Healthcare Analytics Adoption Model, the ongoing transition from relational databases, the role of new Microsoft products such as Azure and Analytic Platform System, the PowerX product line, and geospatial and machine learning visualization tools. Attendees will learn how to incorporate cloud-based analytics services into their healthcare analytics strategies. 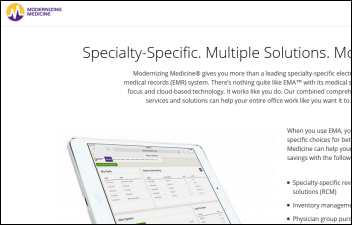 Specialty EHR vendor Modernizing Medicine signs a lease for new office space in Roseville, CA to expand headcount from 24 to up to 70 for the former Aesyntix Health, which it acquired in December. 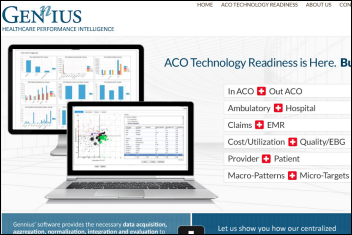 EvergreenHealth Partners (WA) selects Wellcentive to coordinate care of 400,000 residents served by the 500 physicians of the clinically integrated network.

Cerner will integrate visual analytics from Tableau Software into its enterprise data warehouse and analytics products.

Validic announces that it integrated with 27 additional digital health devices in Q1 and is beta testing its connectivity with Apple HealthKit. The company has also released a developer platform that provides API access to its marketplace. 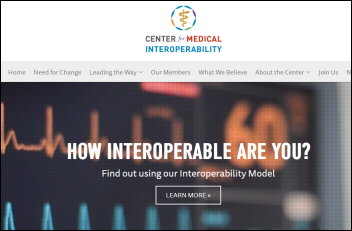 The non-profit, hospital-focused Center for Medical Interoperability, funded by a $10 million grant from the Gary and Mary West Foundation, names its initial board of directors.

The Texas Medical Board is considering barring doctors from generating prescriptions for patients they haven’t met in a face-to-face visit, although the wording seems vague on whether “face-to-face” excludes video consultations. Dallas-based telemedicine provided Teladoc says the state is moving backward in prohibiting use of a technology that can help solve access and cost problems, but others think it’s the state’s job to avoid creating a double standard that devalues the traditional office visit and relies on new technology.

A painfully long and overwrought Wired article with the obligatory “click me please” headline (“Drug Pump’s Security Flaw Lets Hackers Raise Dose Limits”) prattles at length about the purely theoretical possibility that hackers could alter the drug libraries of smart IV pumps, meaning they couldn’t do much of anything other than altering the minimum and maximum allowed doses (not a given patient’s actual dose). Sometimes security analysts find real, previously undocumented security holes of major importance, but sometimes their announcements are more boastful than useful. 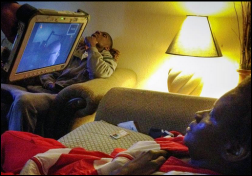 NPR covers the use of telemedicine by Houston firefighters, who instead of driving people with non-emergent needs to the ED, can instead connect them with a doctor using iPad video. They can assess the patient and connect with a doctor in real time to decide whether an ED visit is warranted, and if not, schedule them for a regular doctor’s appointment (including a free cab ride). The project addresses the fact that 40 percent of Houston ED visits are for non-emergent primary care issues. 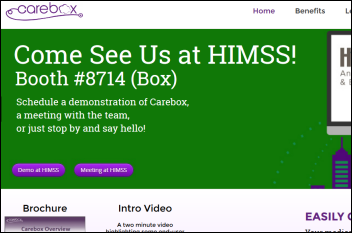 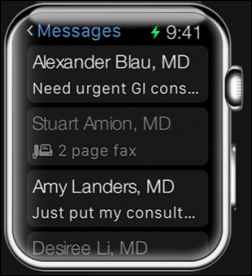 Doximity announces a secure clinician communication app for the Apple Watch that sends the user to their iPhone for more detailed information (since Watch does nothing without being connected to an iPhone). In a bizarre “only in healthcare” intermingling of old and new technologies, it will alert doctors when they receive a fax. 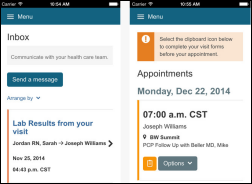 Cerner will release an Apple Watch version of its HealtheLife that will offer consumers push notification health reminders and data tracking while collecting biometric data to send to Millennium.

In an HIStalk Practice interview, former National Coordinator Farzad Mostashari, MD (now CEO of Aledade) says he’s surprised that the certified EHRs he now has to deal with personally “can’t perform in a real clinical setting” and he’s happy that ONC is considering field testing and a mechanism to deal with EHR customer complaints. He says he’ll be cruising the HIMSS exhibit hall to look for systems for his participating practices that create “practice happiness,” meet MU requirements in a workflow-friendly manner, and are sold by vendors who are willing to work with third-party health applications. He adds that EHR vendor interfacing charges are “outrageous” and that every public and private HIE should offer ADT notifications. On fuzzy, buzzwordy topics like patient engagement, population health management and precision medicine, Mostashari says vendors should have embraced Meaningful Use enthusiastically as a roadmap that would have gotten them there, but instead took a compliance-only approach that frustrated their users.

Here’s a smart idea from HCS since HIMSS badges don’t make it clear what kind of organization an attendee works for: they’re offering badge ribbons that denote long-term care, behavioral health, and long-term care acute hospitals so that attendees with similar interests can find each other. Not to take away from HCS’s efforts, I had a similarly great idea for identifying attendees by their personal characteristics, but I’m hampered by limited attendee demand for badge ribbons that indicate “Self-Important Douchebag,” “Incompetent Despite Appearances,” “Obliviously Intellectually Challenged,” and “No, This Isn’t the First Sales Job I’ve Lied In.” Perhaps I should instead have them manufactured in the “Kick Me” back-attached variant that could be applied by observers who are more situationally objective than the wearer.

A New York Times article examines the trend of insurance companies trying to boost lagging life insurance sales by offering premium discounts to customers willing to share electronic data that includes real-time tracking of gym utilization and overall physical activity via a monitored Fitbit. A privacy expert questions how all of that consumer data will be used, while a law professor ponders whether the program is just a way for life insurance companies to weed out less-healthy customers: “The people who have the time to devote to jumping through all the hoops are likely to be better off than average, and those healthy enough to do wellness activities may be unrepresentative of the chronically ill. I believe that is one reason why there is empirical research severely questioning the value of wellness programs.”

A jury awards $1.38 million to a former billing supervisor of Harrison Medical Center (WA) who was fired after filing a whistleblower lawsuit in which she questioned why she was told to run a monthly Medicare billing program daily instead.