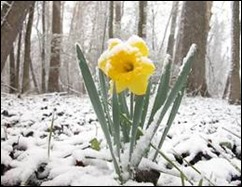 Just when I was excited that spring had finally sprung, our friends at CMS and ONC have dumped a load of snow on my proverbial daffodils by releasing the Meaningful Use Stage 3 proposed rule along with the 2015 Edition Health IT Certification Criteria. Although it proposes to “simply the meaningful use program,” I find it hard to believe that the 301-page rule and corresponding 431-page certification criteria can be viewed as simple. As an example, there is a four-and-a-half page glossary of acronyms near the beginning.

Having sat through the first two parts of the trilogy, I know Hollywood would have helped me out by breaking the third installment into two full-length features. Alas, we aren’t that lucky with federal regulations and we’re squeezing it into three parts, much like Shakespeare’s Henry VI. I really did try to get through it, but I think the last five or so years of reading so many regulations have shortened by attention span. I hoped if I delayed into the weekend that Mr. H would read it and provide a pithy digest, but it seems he’s thrown in the towel as well.

Glancing through, they do note that, “Stage 3 of meaningful use is expected to be the final stage” which brings a sigh of relief. However, starting in 2018, all providers would report on the same Stage 3 definition of MU regardless of prior participation. Everyone would be on the same playing field regardless of their start date, which certainly does make things simpler. It makes it nearly impossible, however, for those who have not yet started to play the game.

I liked the proposal on page 15 to remove “topped out” measures, which they believe are “no longer useful in gauging performance, in order to reduce the reporting burden on providers for measures already achieving widespread adoption.” Sorry for the easy “A” grades, folks, you’re going to have to continue to work for it. There will, however, continue to be four categories of exceptions:

The estimated federal cost to continue the incentive programs between 2017 and 2020 is approximately $3.7 billion. They do mention that “we do not estimate total costs and benefits to the provider industry” because those would be difficult to estimate. We all know that our EHRs cost far more than the $44,000 we might be receiving through Meaningful Use. Additionally, I’m not sure what the neck and back pain that some of us experience after hours at the computer might be worth if we asked for compensation. That’s not to mention the anxiety of dealing with all the virtual I’s that have to be dotted and T’s that have to be crossed to receive the incentive payment and/or avoid a penalty.

Pages 20-23 give a nice overview of the regulatory history and if you’re interested in the definitions they start on page 24. I admit, though, that my concentration started flagging around page 30 and I decided to call it a night. The 60+ patients I saw earlier in the day (will flu season never end?) started to catch up with me as did the glass of Simi cab. I’m going to have to work my way through it over the course of the next week, but I’m still crossing my fingers that the Cliffs Notes version will come out soon.

I feel for the vendors that have to read both the proposed rule and the certification requirement documents to be ready for clients who are going to start asking how vendors plan to handle the requirements before anyone has barely had a chance to digest them. Not to mention, this is still just a proposed rule and subject to public comment and potential revision. Although we don’t expect too many changes based on the historical track record, there still might be a few. I always enjoy reading some of the public comments and I’m sure those will be good for discussion in a few weeks.

I’m still a relative youngster in the medical trenches, but reading the proposed rule did make me nostalgic for the so-called good old days that I barely got to experience in practice. I was already nostalgic after a patient encounter earlier this week, when I had the privilege of caring for one of my medical school professors. He retired the year my class graduated and happened to need care while visiting his grandchildren in my city. When I saw the name come up on my census, I couldn’t help but think of my teacher. I’m sure I was beaming when I walked into the exam room and realized it was indeed him. I’m just thankful his issue didn’t involve his specialty of head and neck so I didn’t feel like I was on the hot seat again.

I do miss the continuity of traditional family medicine, so it was nice to make that kind of connection with a patient. I can’t help but think that my class gave him more than a little heartburn and might have contributed at least a little to his retirement decision back in the day. Luckily his problem was minor, but I have to say that seeing him made not only my day but possibly also my week and my month. I went into medicine to connect with people, but I feel that connection is being lost as the healthcare system evolves. After a bright spot like that, sitting and reading government regulations just makes me sad.

I’m sure lots of other CMIOs, medical directors, and informatics pros will be digesting the regulations this weekend. I’m going to finish unwinding and get ready for a big week of budget meetings and discussion about the further evolution of my team.

I asked last week how others unwind after a long day. Several respondents cited wine or other adult beverages, but an equal number mentioned physical activity as a stress reliever. Swimming, cycling, and horseback riding also made the list. As long as the snow stays away I’ll be out in the garden, marveling at the tender shoots and the promise of things to come. For tonight, however, I’m going to close my eyes and count not sheep, but pages in the Federal Register.

Are you ready for MU3? Email me.