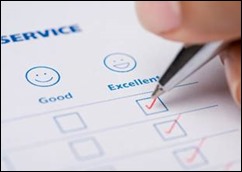 I wrote last week about my new urgent care job. This week I worked a bumper crop of shifts to try to immerse myself in the new policies, procedures, and workflows.

From a clinical standpoint, it’s been terrific. The support team is top notch. I have the option to use a scribe, but I haven’t yet taken advantage of it.

Today was the second-busiest shift that my location had ever seen. I thought I kept my head above water despite having some really ill patients. I had several patients needing procedures or multiple diagnostic tests, so at times we were a little backed up.

I was so busy I barely had time to eyeball my phone. I headed home to put my feet up and was surprised to find multiple emails from patients waiting for me. Apparently my new employer subscribes to an online rating service that allows patients to submit feedback in an attempt to mitigate any negative feedback that might be otherwise posted to online rating sites.

I’m all for patient engagement and receiving feedback, but I wish I would have been warned. Although the email came from the rating service, it’s unclear whether patients can see my email address. Regardless, I would have set up a separate account to handle the traffic.

Even more unclear is what I am supposed to do about feedback that might be negative. At one time we had multiple very ill patients in the office and had even called EMS to transfer one to the hospital. I wasn’t surprised that one of my feedback submissions was about having a long wait. I called for backup when I felt it getting bad (we have flex staff that can swing over from our other locations) but it took time for the float to arrive and pitch in.

Our practice management system tracks all the different times in the patient cycle, from door to doctor to discharge and everything in between. I’m sure my numbers looked pretty bad at multiple times today, but the numbers don’t reflect acuity or case mix. They don’t give you the true picture of what might be going on.

I’m comfortable being rated on the timeliness of my care when I’m in a practice setting with scheduled appointments. I pride myself in running on time and I do well keeping up as long as the appointment slots are on a pretty standard schedule. If you want to grade me on that, I’m game.

However, being graded on being too slow is uncomfortable when you’re in a walk-in setting. It’s not uncommon to have a half dozen patients walk in right after one another. Maybe having multiple patients at the same time who should have really been in a hospital emergency department isn’t that common, but it was my reality.

Thinking through the day, I know I saw patients as quickly as I could, giving the best care possible. My team worked extremely well together, and although people’s lunch breaks were delayed and they were working hard, it felt good. One of the nurses was celebrating her 40th birthday and a member of the management team came to the office with treats. She also brought my official monogrammed scrubs, which made me feel even more like a member of the team.

Although the patients were served faster than they would have been at my hospital’s ED — not to mention that their primary physicians were unable to serve them at all — we didn’t meet their expectations.

I was facile enough with the EHR to run without elbow support, even figuring out a couple of shortcuts. For some reason, my favorite medications are all duplicated, though. With the mad rush we had, there wasn’t time to look at it or resolve it, so prescribing medications is much slower than I’d like it to be. I did get quite a few favorites built on the fly and picked up some tips from the staff at the end of the shift as things slowed down.

I’m waiting to hear back from the owner about what they want me to do with any feedback that wasn’t five stars. In the mean time, I’ve got a new Gmail account ready to receive patient comments rather than having it sent to my personal account. Since I’m only working a couple of shifts a month, I hope the follow-up they expect from me is minimal.

I’m also waiting to hear about their ICD-10 training plan. I’m hoping to get them to hire me to do their training when the time comes. I’ll definitely have the skill set and it might be good for them to be able to have one of their in-house physicians deliver it rather than having to contract it out.

In the mean time, I’m unwinding with a nice glass of wine and recharging before I head into the CMIO trenches tomorrow.

How do you unwind after a long day? Email me.