Cerner shares hit a 52-week high last week, closing Friday at $65.71 and valuing the company at $22 billion. The end-of-year rise sounds impressive until you examine the one-year share price graph that shows CERN shares rising 18.2 percent (blue) vs. the Nasdaq’s 15.6 percent (red), so it barely beat the Nasdaq composite index.

From Pango: “Re:  vendor employee provider experience. My company developed a rounding program where our software developers, project managers, product managers, and QA team members spent time observing a clinician in hospital departments. It was valuable because it provided insights into workflows and usability that we could not have understood other than by on-site observation. The programs were in place at several client hospitals and we maintained an active rotation of our team members who wished to participate.”

From Patti Melt: “Re: Epic. I just spent all day interfacing it to other systems. Since Neal Patterson says it can’t be done, should I buy a lottery ticket?”

From Urban Cowboy: “Re: Madison airport. If Epic is trying to eliminate consultant advertising within 50 miles of Verona, someone should tell the airport since it’s about all they have. With fewer implementations, they need all the help they can get.” Someone mentioned previously that perhaps the airport wasn’t within Epic’s rumored no-fly-ads zone since it’s a long cab ride, but Google Maps says it’s only 21.9 miles.

News is predictably (and thankfully) skimpy, so the biggest takeaway from this post is that you haven’t missed anything over the post-Christmas weekend.

Dave Miller, CIO of Optimum Healthcare IT and formerly CIO of University of Arkansas for Medical Sciences, sent out an email suggesting Christmas donations to the Salvation Army, recounting how as a child the organization got his family of seven through their temporarily homelessness. Bitdefender wouldn’t let me bring up Dave’s fundraising campaign page at OnlineRedKettle.org because of a phishing warning, but I matched Dave’s $250 donation online in honor of HIStalk’s readers. Salvation Army is my #1 overall charity choice, with DonorsChoose.org running a close second.

I’m ecstatic to report that three-quarters of respondents to my poll say they’re happier now than they were a year ago. New poll to your right or here: what is your overall impression of HIMSS? Click the poll’s “comments” link after voting to explain.

TEDMED is offering a $1,000 discount for registrations completed by December 31 for next fall’s event, dropping the cost of the refundable, transferrable delegate pass to $3,950. This year’s event was split between San Francisco and Washington, DC and connected by video. No way I’m paying thousands of dollars to watch a big screen meeting from the other side of the country, but to each his own. The only names I immediately recognized from last year’s speaker list were swimmer Diana Nyad and Theranos CEO Elizabeth Holmes, neither of which would cause my hand to move toward my wallet.

Jeb Bush will resign from the board of for-profit hospital operator Tenet Healthcare as he explores a 2016 Presidential run. He made $300,000 from that gig last year. Tenet is worth $5 billion, with CEO Trevor Fetter holding shares worth $42 million.

A Wall Street Journal report says that Medicare is hard to fix because the agency doesn’t want to restrict care, adding that new providers aren’t vetted and inspectors never visit provider locations to see if they are real. The article points out that 45,000 new providers sign up to deliver Medicare services every month and CMS doesn’t have the resources to vet them. 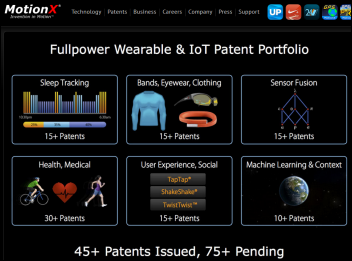 My most-used iPhone app is the outstanding, 99-cent MotionX GPS Drive navigation system. I just noticed that the company offers the also-99 cent MotionX 24/7, which includes a sleep tracker, step counter, heart rate monitor, and wake-up alarm, all integrated with Apple Health. I didn’t realize until I looked up their site that the company’s emphasis is on and quantified self rather than GPS navigation. It holds dozens of patents and licenses its technology to wearables vendors such as Nike. MotionX’s CEO and co-founder is Philippe Kahn, who invented the phone camera, founded the powerhouse 1980s software vendor Borland (Turbo Pascal, Quattro, TopSpeed/Clarion, dBase, Delphi, and Paradox), and earned simultaneous master’s degrees in mathematics and classical flute. I’m installing MotionX 24/7 now and will report back, but I can already see that it’s as well designed as I expected. 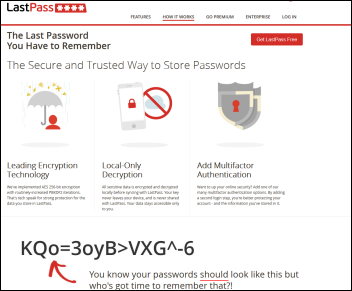 Since I mentioned my most-used iPhone app, here’s another highly used one on the phone, desktop, and laptop: the LastPass password manager and single sign-on utility, which allows me to log on to a single Web page and have instant auto log-in to everything I use online (and to easily and centrally maintain complex and mandatory-change passwords) from any device. It’s free for personal desktop use, or an extra $12 per year to run it from mobile devices.

This should annoy everyone smart enough to use their phone as a personal hotspot instead of paying $15 for crappy hotel Internet access: Marriott and its hotel lobbying group ask the FCC for permission to block tethering, using the extraordinarily stupid and self-serving excuse that guests might use their personal Wi-Fi connections to attack the hotel’s network, steal information from other online guests, or slow down the hotel’s Wi-Fi (all of which are arguments hotels should make for NOT using their own in-house networks, other than the fact that they profit handsomely from it). Microsoft and Google are urging the FCC to deny Marriott’s lame idea. Somehow cheap roadside hotels can offer free parking, Internet, and breakfast but the snootier, big-city ones milk their business travelers hard. Marriott’s Springhill Suites is still my favorite chain, though.

The board of Massena Memorial Hospital (NY) approves spending $49,000 for a Medhost upgrade and $29,000 for a Meditech/LSS purchase. The CEO explained that the Medhost upgrade is required for complying with New York’s I-STOP mandatory electronic prescribing law, adding, “The last thing we want to do is end up sideways with the state and DEA. That would be extremely unpleasant.” 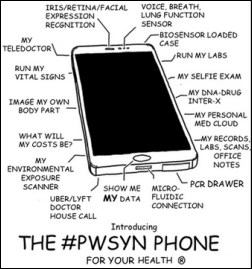 Eric Topol, MD tweeted this graphic of his medical smartphone concept from his new book, “The Patient Will See You Now.” Amazon’s “look inside” preview contains generous sections of the book’s content – it looks good.

This YouTube video of Derby the dog running for the first time after being fitted for 3D-printed prosthetics has received 6.8 million views for its producer, 3D Systems. The company, based in Rock Hill, SC , is traded on the New York Stock Exchange and is valued at almost $4 billion even after shares dropped 64 percent in the past year. 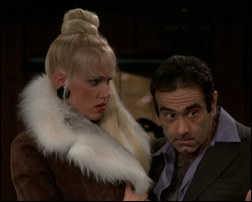 The children of “American Top 40” host Casey Kasem, who died of dementia last June at 82, will share his hospital records with his widow, who is suing the hospital that cared for him. Kasem’s widow is the former Jean Thompson, who played Nick Tortelli’s curvaceous wife Loretta (with the “I Dream of Jeannie” hairdo) on “Cheers.”

The federal government upholds the firing of the head of the Phoenix VA, not because of the wait times scandal that erupted there, but because she accepted gifts from a consultant that included a family trip to Disneyland and Beyonce concert tickets.

‘Tis the season for intolerant lunatics: American Airlines removes a disruptive La Guardia passenger who was loudly berating the flight attendants and crew who had wished him “Merry Christmas.” The man, who wouldn’t calm down, said nobody should ever say Merry Christmas because not everyone celebrates it. His fellow passengers cheered when he was escorted off the plane. 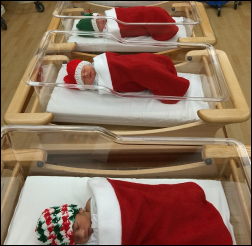 UPMC’s Magee –Women’s Hospital (PA) gives keepsake Christmas stockings and caps knitted by volunteers to the parents of newborns who are in the hospital over the holiday.