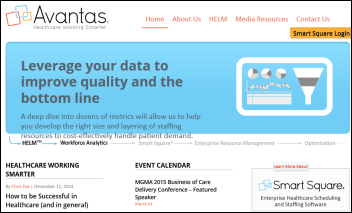 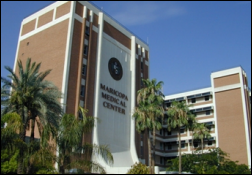 From Sonoran Dog: “Re: Maricopa Integrated Health System. Veiled rumors from administration suggest it will have to shut down in July 2015 due to lack of funds after receiving a large bond in the November elections. Any truth to the rumors? A lot of us medical personnel are working hard to comply with every cost-cutting feature we can come up with to help.” Voters overwhelmingly approved a $935 million bond to upgrade the facilities of the 515-bed public health system that includes Maricopa Medical Center, the Arizona Burn Center, and the Level One trauma center. The CEOs of the four largest private hospitals in Phoenix (Abrazo, Banner, Dignity, and Scottsdale Lincoln) say the huge construction expense is unnecessary given the sufficient bed capacity already in place (theirs, of course.) Readers comments are welcome. Surely there’s little chance of MIHS shutting down given public support, but some sort of public-private partnership with the those other Phoenix systems would make sense.

From Czarina: “Re: vendor-provider contact. What do HIStalk readers suggest for giving vendor employees exposure to the clinical workflow and technical challenges that providers face? We want every one of our people to get out in the field, but just taking a hospital tour doesn’t seem to have much value. We’re considering encouraging volunteering, attending a local or national conference, or taking a clinician to lunch.” I should note that this isn’t a huge company, so their employees won’t overwhelm the local health systems. Ideas? I’ll be honest that in my health system IT experience, I wouldn’t see the benefit to my department in having vendor people underfoot so they could learn on my dime, so I would be somewhat resistant to committing. I like the idea of setting up a volunteer program specific to the IT department if the hospital is willing to support it – our desk-bound IT department people learned a lot just going out with the field services techs or sitting with the help desk people. 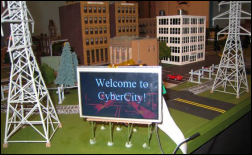 From HITPro: “Re: cyberdefense training system. Can’t mimic real-world health system security because it is virtually non-existent.” CyberCity, created to train federal government employees to defend against cyberattacks, had to artificially boost the security capabilities of its prototype hospital because it otherwise would have been “too trivial to hack.”

I’ll probably slack off a bit over the next week by posting less frequently. Merry Christmas, Happy Hanukkah, and Habara Gani (and if you don’t celebrate any of these holidays, those of us who do thank you in advance for respectfully tolerating that fact). 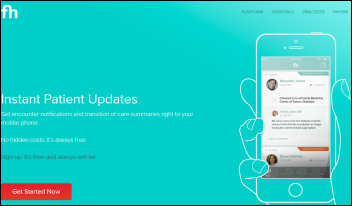 Provider secure messaging app vendor GroupMD renames itself Flow Health, or at least that’s what I infer from the maddeningly vague company blog post announcing a change without really describing it. I probably shouldn’t be surprised given that Flow Health’s “About Us” page on its we’re-so-hip, scroll-happy website doesn’t list its founders, physical location, or history.

Home medical equipment manufacturer Invacare appoints Cleveland Clinic CIO Martin Harris, MD as interim board chair following the retirement of Mal Mixon. The publicly traded Ohio-based company has 5,200 employees and a market value of $533 million, with Harris holding shares worth $327,000. The company’s share price has dropped 28 percent in the past year.

J. Robert Beyster, PhD, founder of SAIC and Leidos, died Monday at 90. He left his job working on nuclear submarines for Westinghouse in 1969 and founded SAIC at age 45.

The Cal INDEX HIE connects to Blue Shield of California via Orion Health. 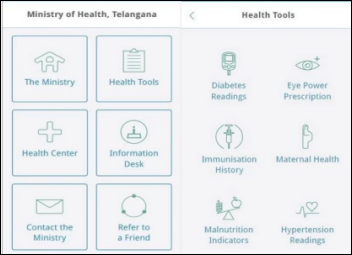 Sagacious Consultants announces an Epic report-writing annual subscription that provides a fixed number of hours each month with discounts of up to $50 per hour. 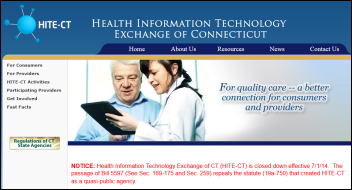 The executive director of the Connecticut Health Policy Project says the now-defunct state HIE oversight organization (Health Information Technology Exchange of Connecticut, or HITE-CT) was shut down “after wasting $4.3 million in federal grants and four years without accomplishing anything.” She references a state auditor’s report that concluded that the organization was slow to react, couldn’t figure out how to fund itself, and failed to renegotiate a bad vendor contract it had signed with Axway and GE Healthcare. At its peak expense year of 2013, the organization paid $343,000 in salaries. Auditors also noted that some of the 20 members of its board often missed meetings, vacant board positions weren’t filled, and with zero revenue the organization couldn’t pay the paltry matching funds required by the federal government ($1 for each $10 in federal grant money received). The editorial’s author is correct: the only accomplishment of the group was to squander federal money. 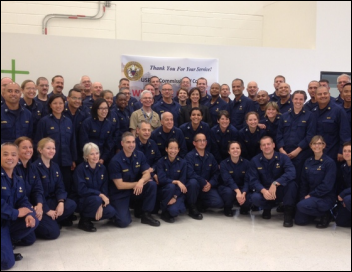 The FDA issues a proposed rule that would require drug manufacturers to provide prescribing information for professionals in electronic form, which would then be posted on an FDA reference site. Paper versions would no longer be allowed since they can’t be updated with new information, but manufacturers would be required to staff a telephone service that would send paper copies on request. 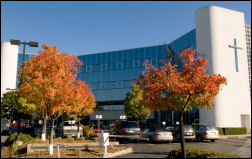 Mercy Medical Center  (CA) announces that a third-party transcription vendor unintentionally opened up its server to the Internet for several weeks, making the physician notes of 620 oncology patients visible in web searches. The hospital has apparently fired the responsible contractor. 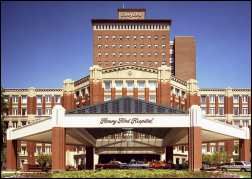 The Michigan appeals court dismisses a privacy brought by 159 people whose medical records were unintentionally made available online by a contractor for Henry Ford Health System (MI). The three-judge panel ruled that an invasion of privacy claim isn’t valid unless the plaintiff’s actions are intentional. 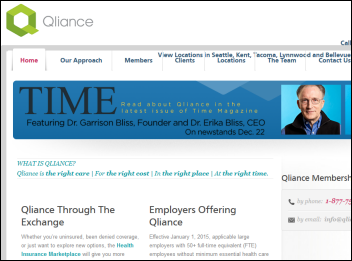 Time magazine profiles Qliance, a Washington-based nationally expanding concierge primary care practice that has lowered its cost to the point that it covers entire businesses (Expedia and Comcast) and even Medicaid groups for a flat monthly per-patient fee based on age. Billionaire investors include Amazon’s Jeff Bezos and Michael Dell. I really like this snip:

At the tangled heart of this dysfunction is Medicare, which by its sheer size sets the standards for insurance reimbursements. Specialists dominate the panel that sets its payment rates. Thus the system values surgeries, scans and other procedures more than it values checkups and management of existing conditions. West, a primary-care doc, explains it this way: “If I put in an hour with a patient, I will be reimbursed for one exam–the same payment I would get for seeing that patient for 11 minutes. Meanwhile, an ophthalmologist might perform three cataract surgeries in that same hour, and each surgery might be reimbursed at twice the rate of my exam. So that doctor is making six times as much money.”

And if the eye patient has questions after the surgery about her medicine or her recovery, the specialist’s office is likely to suggest that she consult with her primary caregiver. After all, neither doctor gets reimbursed for answering questions on the phone, so the chore is often traded like a hot potato. “We say primary care is critical to a healthier future,” West says, “but in every way we show value, it is at the lowest level.” 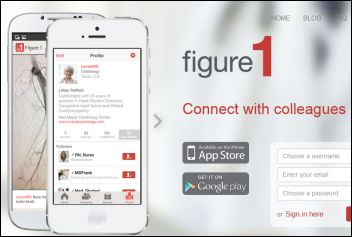 Doctors without Borders is using donated advertising on free medical imaging social network Figure 1 (“Instagram for doctors”) to recruit Ebola volunteers. The app automatically detects faces in submitted photos and blocks them for privacy and allows users to manually block other identifying features. Images are also moderated before posting to make sure they have been de-identified. The Toronto-based company has raised $6 million in funding and was founded by (a) a professor and writer with a JD and Columbia MBA; (b) an internist who describes himself as having an “above-average sense of humor and below-average physical fitness”; and (c) an iOS app developer.

A Harvard Business Review article called “The Antidote to Fragmented Health Care” contains as  one of its recommendations universal EHRs. It doesn’t define exactly what that means, but references the VA’s VistA, Kaiser’s HealthConnect, and the OpenNotes initiative. Looking back at all the money (taxpayer and otherwise) spent on EHRs and HIEs, maybe the better and cheaper alternative would have been to buy or create a nationalized EHR. Or, as I proposed years ago, mandate use of a standardize EHR database structure with rule-defined fields and let vendors compete based on the user interfaces and add-on capabilities they sell beyond the basic database-populating parts of the EHR.

Trustees of Regional Medical Center (SC) approve an extra $500,000 to implement Cerner’s document imaging system, with its president explaining that the hospital had underestimated the number of departments that would use the system and the volume of documents to be converted. 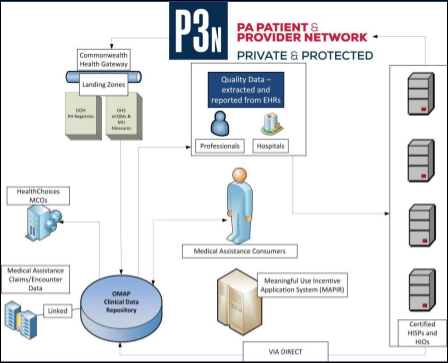 The annual report of the Pennsylvania eHealth Partnership Authority says its biggest challenge is funding (duh) after its ONC grant ran out earlier this year, when it asked for $1.85 million in state support. Now it wants $4.7 million for the next fiscal year, explaining that it failed to generate the charitable donations it expected, user fees that were supposed to start kicking in earlier in 2014 won’t start until mid-2015, and even then those fees “will not reach levels that contribute significantly to Authority sustainability until most HIOs are onboarded to the P3N in 2016.” Translation: we don’t don’t know how to run a business, every one of our plans and projections were wrong and have been scrapped, and it’s highly doubtful anyone will ever pay us for the services we may eventually offer. Therefore, taxpayers should provide a never-ending flow of money so a poorly conceived, ever-changing, and incompetently executed idea can be pushed onto a market that doesn’t want it. 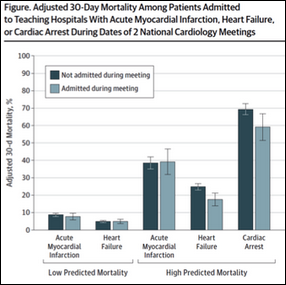 An apparently serious study finds that the 30-day mortality rate of high-risk heart failure and cardiac arrest patients admitted to teaching hospitals is lower when cardiologists leave to attend national conferences. I remember reading years ago that death rates dropped when hospitals were closed due to strikes.