The AMA issues a Meaningful Use blueprint that calls for CMS to:

The AMA’s document also calls out C-CDA as causing interoperability problems, saying that ONC mandates its use in Stage 2 even though it has had “very little real world testing, nor was it balloted or approved for standardization by HL7” and therefore is still a draft standard with “wild variation in technology versioning.”  It urges that ONC not repeat the same process of jumping on untested standards starting with Stage 3.

From Media Horse: “Re: Abraham Vergese, MD’s comments about EHRs interfering with patient care. He was the keynote speaker at athenahealth’s user conference a few years ago. It was a good speech about preserving the patient-doctor relationship, but it’s interesting that he spoke for a company that’s in essence a billing company with an attached EHR. I’m not suggesting that he’s a hypocrite, but I’m sure he was paid well.” 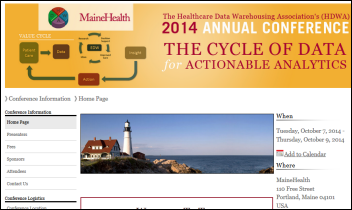 From Number Six: “Re: Health Data Warehousing Association conference in Portland, ME last week. I was impressed by the all-volunteer organization’s conference and the low registration fee of under $500 for 2.5 days. It was held in MaineHealth’s really nice conference center and had about 170 attendees. No vendors, just data people giving concrete details of what they’re working on in their institutions. Utah presented how they incorporate PROs into Epic and Altrius had a talk on predictive modeling, which was then covered in a ‘Sharing’ session on Day 2 since it was obvious that their specs could be implemented at other places. I highly recommend the conference HIStalk readers. Next year’s meeting is in Grand Rapids.”

From Always Be Closing (Offices): “Re: CompuGroup Medical. Closing the Boston office and terminated the sales VP and several sales reps.” Unverified, but the report is from a non-anonymous insider. 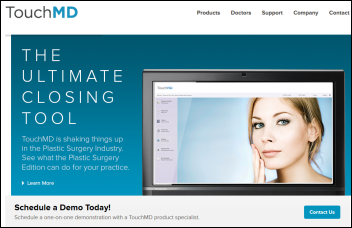 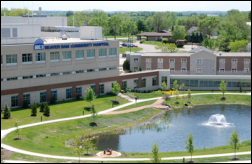 Andrew Gelman, JD will step down as SVP of corporate development for PDR Network to run a family business, but says he will keep his hand in healthcare with occasional consulting.

Facebook CEO Mark Zuckerberg and his physician wife donate $25 million to the CDC for Ebola control.

University of Arkansas for Medical Sciences promotes Rhonda Jorden to vice chancellor for IT and CIO. 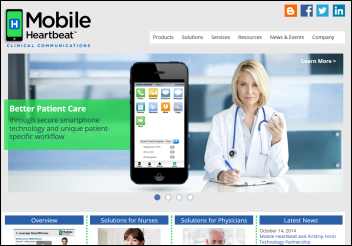 Mobile Heartbeat will integrate EMR and waveform data from AirStrip’s One platform into its care team smartphone app. 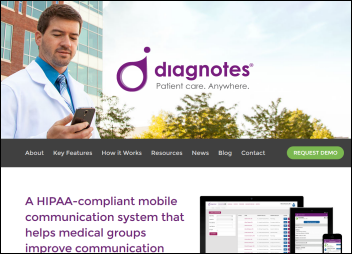 Eskenazi Health (IN) will use technology from Indianapolis-based Diagnotes to alert its brain center coordinators when patients are admitted, discharged, or transferred from hospitals as reported to the state HIE.

Personal health records management app vendor Hello Doctor claims it has “gained access to an API” that gives it “access to 52 percent of clinics and hospitals in the US.” That sounds suspicious since there’s no single API out there that covers multiple vendors, leading me to believe that perhaps they’ve connected to Epic in some manner and are using the “52 percent” statement incorrectly to refer to organizations rather than patients.

Rep. Renee Ellmers, RN (R-NC) issues a statement saying she’s pleased that CMS extended the Meaningful Use hardship exception after admitting that its submissions website wasn’t working correctly, but repeats her request (made via her proposed Flex-IT Act) that CMS reduce its 2015 Meaningful Use Stage 2 reporting period from 365 days to 90 days.

I always support the federal government, but bold new ideas get lost in the complexity of procurement, contract management, and getting stakeholders to agree. Navigating the US government is difficult and complicated, and an outsider from Google or Facebook is likely to be eaten alive. Only an insider can navigate the process while offering new ideas and approaches.

HITPC’s JASON Report Task Force will deliver its conclusions today (Wednesday), proposing that current interoperability approaches should be replaced with an API-driven model starting with Meaningful Use Stage 3. It disagrees with the JASON report’s conclusions that such an approach requires new clinical and financial systems, that the market has failed in its failure to advance interoperability, or that a newly mandated software architecture is required. The task force advocates that ONC create a public interoperability API and encourage its use via the Meaningful Use program.

Executives of California’s health insurance exchange are questioned about its contracting practices as a state senator claims the organization practiced cronyism in awarding dozens of no-bid contracts, some of them to a company whose owner has close ties to Covered California’s executive director. 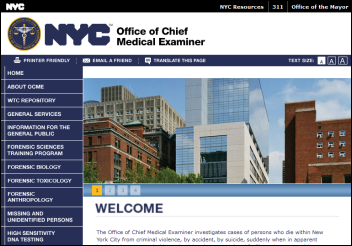 The chief of staff of New York City’s medical examiner’s office quits following a $10.9 million no-bid, sole-source contract award to a ICRA Sapphire, whose software has cause bodies to be mishandled or lost. The city has been paying for the system using Homeland Security grants, having awarded what one lawyer called a “lifetime contract with constantly increasing costs and poor results” and hiring the India-based company’s rep as the ME office’s CIO. The previous CIO and his girlfriend were arrested for embezzling $9 million in FEMA grants intended for tracking the remains of 9/11 victims. The just-resigned chief of staff had been promoted to the position even after getting caught stealing an airplane’s exit handle from the 9/11 debris to take home as a coffee table souvenir.

A reader called my attention to Xenex, whose xenon-powered pulsed UV devices (“Germ-Zapping Robots”) can disinfect hospital rooms in a few minutes, a timely topic given Ebola. Two of the company’s executives hold doctorates from the Bloomberg School of Public Health at Johns Hopkins University, while the other two were involved with Rackspace Hosting. 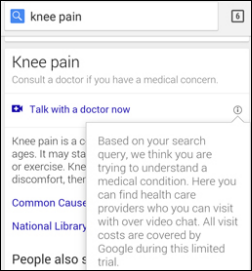 Google is testing a search feature that would allow people who are Googling medical symptoms to click a “talk with a doctor now” link. 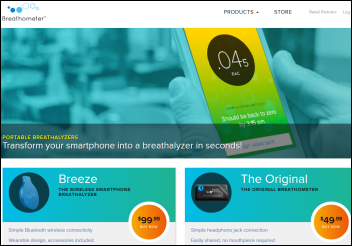 The Brookings Institution presumably publishes intelligently written and authoritative articles on occasion, but this lame piece called “Could Better Electronic Health Records Have Prevented the First American Ebola Case?” isn’t one of them (maybe Farzad was the only person there who knew anything about healthcare IT). Its insight is zero, its valid points are few, and its flaws are many:

Anna McCollister-Slipp, the co-founder of an analytics company and Tricorder Xprize judge who also has Type 1 diabetes says she’s tired of waiting for digital health to flourish, pointing out that:

A Pennsylvania legislator questions UPMC (PA) about its ability to send records of Highmark insurance patients to new providers when they lose access to UPMC’s hospitals on January 1. UPMC CIO Steven Shapiro says they can transfer records electronically within 24 hours, but Highmark claims UPMC will be sending faxed documents instead. UPMC uses Cerner among its variety of systems, while Highmark-owned Allegheny Health Network is moving to Epic.

Reuters covers the growing telemedicine market in China, which the government is supporting to overcome the rural-urban medical expertise gap. A report says doctors in China spend 13 hours per week online, with 80 percent of them using mobile phones. 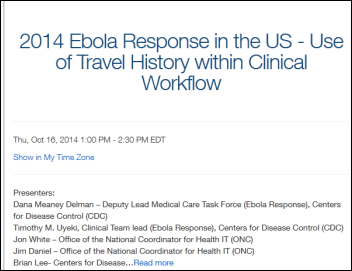 CDC and ONC will present a webinar on Thursday, October 16 at 1:00 – 2:30 p.m. Eastern to encourage providers and EHR vendors to work together to develop Ebola screening tools. CDC’s Ebola team will present its detection algorithms and travel history / medical signs checklists.

NBC medical correspondent Nancy Snyderman, MD admits that some of her crew members broke a voluntary Ebola quarantine in going out for takeout food after returning from Liberia, where the group had been in contact with an Ebola-infected freelancer. New Jersey health officials reacted to her admission by making the quarantine mandatory.  She declined to say whether she herself was one of those involved as several locals who spotted her indicated.