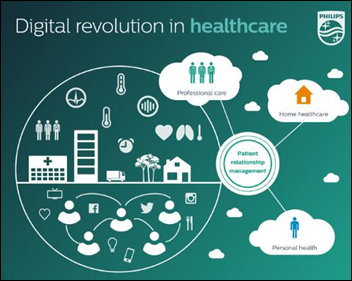 Philips will deploy clinical applications in a Salesforce.com-powered cloud environment that’s centered around patient relationship management. Two applications will be launched this summer, eCareCoordinator and eCareCompanion, which are collaboration platforms for monitoring chronic condition patients at home.  Philips says future offerings will incorporate information from EMRs, medical devices, home monitoring, and wearables. The platform will be open to developers to create add-on products. 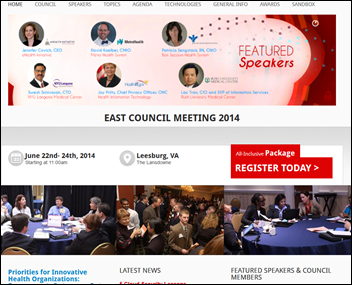 From Otto Complete: “Re: HTRAC East conference in Leesburg, VA. I attended this week and found it to be amazingly enlightening! Limited vendor involvement, zero exhibitors, and passion for IT improvement in our space, along with tremendous information sharing – these are just a few of the compliments I would give the conference. As you are a thought leader in our field, I wanted to be sure this group was on your radar.” I hadn’t heard of the group or conference, but they get points from me for being non-profit and for bundling meals (and an open bar) with the registration fee. The write-up says it’s invitation-only and limited to around 200 attendees, with minimal vendor participation and no exhibit hall.

From Demon Deacon: “Re: Wake Forest Baptist IT department. The CMIO and VP of clinical applications positions were eliminated and will be replaced with a chief clinical information officer.” Unverified, although a search of Google’s cache turns up the now-removed job posting that I assume they filled. They’ve had a lot of IT turnover after their horrific Epic implementation.

Listening: Chicago-based Eleventh Dream Day, probably the best and hardest-rocking Midwestern band that nobody’s heard of thanks to their record label’s incompetence. Also: Queens of the Stone Age.

My latest reading peeves: (a) cutesy reporters who start off a healthcare technology story with, “The (technology name here) will see you now.”; (b) using “there” as the subject of a sentence; (c) clickbait headlines, tweets, and lame slide shows that will do anything to get you to click even though you will regret it almost immediately; (d) referring to doctors as Dr. John Smith, which doesn’t tell us what kind of doctorate John earned; (e) surveys that try to hide low participation by giving results only as percentages; and (e) as I try to ignore the flood of World Cup chatter, people who confuse spectating with exercising in referring to someone else’s athletic team as “we.” I’ll keep the porn analogy that popped into my head to myself.

We’ve decided to post the recorded videos of our HIStalk Webinars on YouTube to avoid the playback problems some viewers were having. The webinar, Cloud Is Not (Always) The Answer, ran live this past Wednesday. Not only did Logicworks do a great job in taking our suggestions and input from two CIOs into account to perfect their content and delivery, running the recorded version from YouTube is cleaner and faster, with no signup required to start watching. 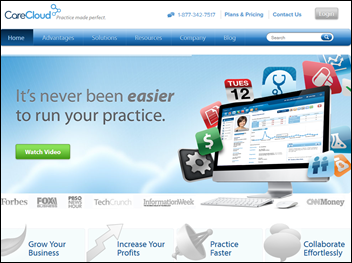 CareCloud borrows $25.5 million from a growth capital lender. I’m never cheered by a company taking on debt just like I wouldn’t be thrilled about a relative signing up for a home equity loan, but I guess it’s good news to be found credit-worthy and to have your plan for using the money vetted by someone whose objectivity is inarguable given their interest (no pun intended) in being repaid. 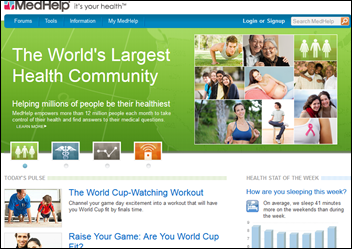 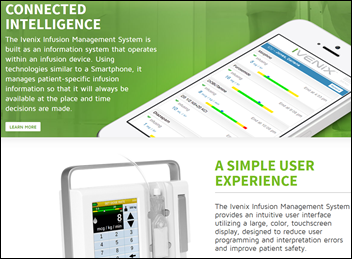 Ivenix announces that it is developing a new smart IV pump that will feature a smartphone-like user interface, enhanced IT capability that includes Web-based EHR integration and analytics, and new pump technology. 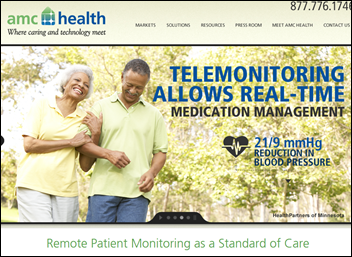 Telehealth solutions provider AMC Health says it has integrated its system with Epic.

Verizon announces Virtual Visits, a secure video technology platform that allows consumers to connect with doctors. The company hopes to license the technology to health plans (i.e. doctor not included.) 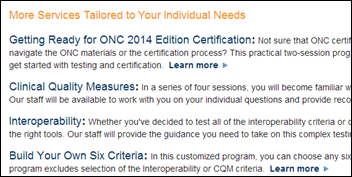 The non-profit CCHIT, which exited from what it said was the unprofitable EHR certification business in January 2014, announces its new mission of selling developers advice on how to get their EHRs certified. 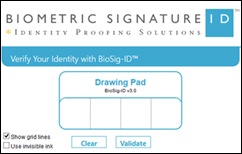 Biometric Signature ID announces its handwriting-powered identity authentication system for Epic. It seems that handwriting would not be reliable given that users would be “writing” with their fingertip on a small screen while standing up in most cases, but maybe they’ve figured it out. You can try cracking a “Go Verify Yourself” signature-powered access page on their site.

A Bloomberg editorial says that the Affordable Care Act is drawing a disproportionate number of people with chronic conditions to sign up for health insurance, which could possibly drive insurance companies out of the market or force the President to try to bail them out (with questionable legality) as he promised upfront to get them to participate.

CMS claims that its much-maligned Medicare fraudulent claims detection system prevented $210 million in payments in 2013, its second year of operation. That works out to something like 0.02 percent of total payments, a fraction of the government-estimated $50-60 billion that CMS improperly pays each year, and less than a monkey throwing darts could turn up before hitting the Beltway by noon on the Friday before Independence Day.

A Wisconsin high school loses its track coach to Epic, where he will become a project manager. He says, “I’ll be working to implement software, and going out to hospitals and clinics, visiting with doctors and nurses, and discuss their ideas and concerns with the developers at Epic … I’m no computer whiz. They say they want people who are able to distinguish themselves through their careers, and they’ll teach the rest. There will be a lot of learning.”

An editorial in Applied Clinical Informatics says that specifying advance directives should be easy and the resulting preferences should be stored by HIEs and shared via interoperability. It proposes an input sheet that looks like a US tax form in making the analogy that advance directives should be as easy as electronic filing of taxes. Misusing the term as “advanced directives” drives me crazy (you make them in “advance,” not “advanced”) so it was disappointing that “advanced” made an unwelcome appearance three times in the mostly-correct article. Note the subtle humor in identifying the form as 419, the police code for a “dead body found.”

A small (120 responses) AMDIS-Gartner survey of CMIOs finds an average annual salary of $326,000 in a range of $206,000 to $550,000. Respondents reported slightly less job satisfaction than last year, higher CMIO turnover, and an overwhelming preference for reporting to the chief medical officer rather than the CIO. 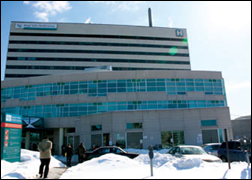 In Canada, a $300 million privacy lawsuit is filed against Rouge Valley Health System that alleges two hospital employees sold the names of 8,300 mothers of newborns to an investment who cold-called them to sell education savings plans.

Google CEO Larry Page says yet again that 100,000 lives would be saved each year by more healthcare data mining. He’s made that claim (without backing it) several times.

A Bloomberg article says that hospitals are starting to use consumer information from big data sources to target their at-risk patients for interventions, such as finding out which asthma patients are buying cigarettes or whether heart patients are allowing their gym memberships to lapse. Patients say hospitals making cold calls about health habits is intrusive, but hospitals say they need to aggressively manage their patients under new payment models.

A new KLAS report reaches an obvious conclusion: only Epic, Cerner, and Meditech are expanding their hospital EMR client bases. Actually I was surprised that Meditech was included since my perception is that they are falling behind rather than gaining, but I assume KLAS has hard data suggesting otherwise.

It’s been a completely random week at work. Most of the practices we acquired earlier in the year have stabilized from a revenue cycle perspective, so it’s time to bring them up on EHR. Once the Independence Day holiday rolls by, it will be full steam ahead.

There have been a couple of last-minute glitches though, mostly involving providers behaving badly. There are always challenges when a practice has to change its culture, but I’ve not seen this many employed providers who don’t seem to remember that they’re employed.

Some of our operational leaders try to soften the blow by referring to them as “partners” or “associates,” but the bottom line is that they are employees. If we were partners, there would be shared decision-making and give and take. There would not be top-down leadership with requirements that must be adhered to. There would not be contractual obligations that require compliance with a host of regulatory items. There would not be penalties for failure to adhere to documented policies.

I’m fortunate to have an implementation team that’s well-seasoned and grateful for its manager and her solid leadership. Since the team has had a couple of months without active deployment cycles, we front-loaded the calendar with some of the most difficult providers. That way they can get them done while they’re still fresh. The majority of the team agreed they’d rather save the best providers for last rather than having to look forward to all the difficult ones at the end.

From Stay Glassy San Diego: “Re: Dr. Chrono’s Glass app. Did you see it? They’re referring to it as the first wearable health record.” I did see, it but I’m not sure it’s actually a wearable record as much as a different way to interface with the record. Physicians can store a video of an office visit in the EHR but it’s not clear how that translates to discrete data or the other hoop-jumping we need for payers and incentive programs. I did find it interesting that media reports cite 300 of the 60,000 drchrono clients as users of the Glass app. They may have downloaded it, but given psychosocial and privacy concerns around use of Glass, I’d be surprised if that many were actually using it. According to the company website, users can sign up to be beta testers, which doesn’t exactly sound like widespread adoption to me. If there are any readers who have actually used it, I’d be happy to share your stories.

From App-e-tite for Destruction: “Re: Open Payments, did you look at any of the other government apps that were available? Some are amusing.” I was on a pretty focused expedition the other day but did have some time tonight to check out the Mobile Apps Gallery at USA.gov.  In addition to Apple and Android, they still offer content for BlackBerry. There’s an app to help you through the National Gallery of Art as well as one to locate alternative fueling stations for electric, biodiesel, CNG, and other non-gasoline vehicles. I spent some time playing with the FDA Mobile app, which has medication recalls and safety alerts as well as consumer updates. There’s also a radiation emergency app, one that manipulates census data, a rail crossing locator, and a ladder safety app to boot.