HHS Secretary Sylvia Burwell reorganizes the staff of Healthcare.gov in preparation for the next open enrollment period that starts in November, hiring Andy Slavitt of Optum (above) as CMS principal deputy administrator. Optum helped fix Healthcare.gov after its disastrous rollout. Slavitt fills the vacant position that places him as second in command to CMS Administrator Marilyn Tavenner, replacing Jonathan Blum, who left the agency in April. Burwell also announced plans to hire a Healthcare.gov CEO and CTO.

From Dingo Boot: “Re: HIStalk Practice. I took a break from reading but I’m back. A double dose of industry news there and on HIStalk gives me an edge, I think.” Thanks. Jenn is doing an amazing job on HIStalk Practice. She is contributing in other less-obvious ways and will most likely become more visible on HIStalk. 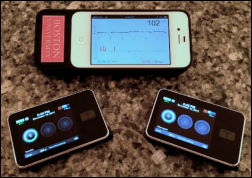 From The PACS Designer: “Re: the bionic pancreas. A new concept to help with Type 1 diabetes has been announced by Boston University. The bionic pancreas device uses uses a smart phone, glucose monitor, and insulin pump to automatically control blood sugar levels.” Quite a few groups were working on the concept, including University of Virginia, but what’s different about this device is that it can manage both high and low blood glucose because it is loaded with both insulin and glucagon. This one’s getting coverage because it was mentioned in a NEJM article describing results from a tiny study of 52 patients over five days. It avoids finger sticks by using a continuous glucose monitor and lets the patient describe what they just ate, such as a “typical breakfast” or “small bite.” Most interesting is that the system doesn’t know or care what type and dose of insulin the patient has been administering since it’s measuring blood glucose continuously – all it needs is the patient’s weight and their descriptions of meal size.

Epic supports interoperability as well or better than its competitors, according to 75 percent of a large number of poll respondents (630). Quite a few thoughtful and informed comments were left on the poll, many of them non-anonymously. I’ll excerpt a few that are from real-life experience rather than the more common sideline Epic bashing or cheerleading:

I’ve worked with several vendors over the years and plenty of HIEs. At the end of the day, Epic connects to other Epic facilities or to non-Epic just fine. Epic to Epic is priceless and effortless. More than 50 percent of the patients in the US today are or will be using Epic when the current Epic pipeline is implemented. For organizations that are not Epic, we expect them to connect to a commercially available HIE or to the federal level HIE (eHealth Exchanged managed by Healtheway). We have no plans to connect our Epic system to other EHRs directly, not when the states and fed are encouraging and incenting us to connect to HIEs.

Epic has already built and tested connections to a wide variety of other vendors, so that implementation is rather easy. Epic notifies us when a new vendor connection is available and we are eager to proceed based on prior success. When configuration changes are found, Epic promptly addresses and tests changes, so there is no finger pointing or project delays. Epic is dedicated to interoperability in a way that I don’t see from a variety of other EHRs. Interoperability projects with Epic will be delivered in a fraction of the time and at a fraction of the expense of many other vendors

My experience with Epic and Direct messaging to date is less robust than some other vendors. At this point in time, Epic can only send and receive CCDA documents — other enclosures like notes, radiology reports, discharge summaries, .wav files — are unable to be sent from Epic to other EMRs. I have seen other EMRs be able to send us different types of information, including free text notes (like an email) and we cannot process them. So in this regard, Epic has lower performance than other vendors.

Our hospital connects with other Epic facilities, local, state and national government organizations and we are currently working on connecting with non-Epic entities. Whether we connect via Query/Retrieve or interfacing, Epic has always been extremely knowledgeable and helpful in assisting us to link to Epic or non-Epic entities.

Epic has the ability, but not the will to interface with other vendors. As one of those vendors, our customers are not getting what they need to support their workflows in specialty areas when Epic declines to provide interfaces to vendors supporting specialty areas.

New poll to your right (or here): have you as a patient had a video-based “visit” in the past year? Vote and then click the “Comments” link to describe.

Listening: new from Mali Music, also known as 26-year-old Kortney Jamaal Pollard from Savannah, GA. His heartfelt lyrics are always uplifting and often religious, while musically it’s mostly neo-soul with some light rap thrown in. It’s likely to polarize people who react strongly to some aspect of his work, which I did: I loved it. Coincidentally sticking with the Georgia theme, I’m also listening to the defunct, Athens-based Magnapop. 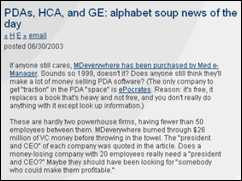 Saturday was the summer solstice, which means it had more hours of daylight than any day of the year. It also reminded me that Friday marked 11 years since I wrote the first HIStalk post. Several of the folks who have recently recommended me on LinkedIn have been readers since the beginning, or at least nearly so, with quite a few going back to 2005 or 2006. Thanks for reading regardless of how long you’ve been doing so. I’m lucky to be doing something that gets me so excited every single day that I can’t wait to get started.

June 24 (Tuesday) 2:00 p.m. ET. Share the Road: Driving EHR Contracts to Good Compromises. Sponsored by HIStalk. Presenter: Steve Blumenthal, business and corporate law attorney, Bone McAllester Norton PLLC of Nashville, TN. We think of EHR contracts like buying a car. The metaphor has is shortcomings, but at least make sure your contract isn’t equivalent to buying four wheels, an engine, and a frame that don’t work together. Steve will describe key EHR contract provisions in plain English from the viewpoint of both the vendor and customer.

June 25 (Wednesday) 2:00 p.m. ET. Cloud Is Not (Always) The Answer. Sponsored by Logicworks. Presenter: Jason Deck, VP of strategic development, Logicworks. No healthcare organization needs a cloud – they need compliant, highly available solutions that help them deploy and grow key applications. This webinar will explain why public clouds, private clouds, and bare metal infrastructure are all good options, just for different circumstances. We’ll review the best practices we’ve learned from building infrastructure for clinical applications, HIEs, HIXs, and analytics platforms. We will also review the benefit of DevOps in improving reliability and security. 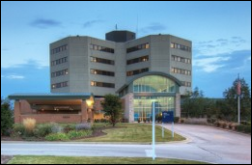 FDA publishes draft guidance stating that won’t enforce regulatory controls on Medical Device Data Systems (MDDS) because they pose low risk to the public and are important for advancing digital health. MDDS are medical devices that transfer data electronically (such as from a ventilator to an EHR), store and retrieve data (blood pressure readings), convert data using preset specifications (pulse oximeter data to printed form), display data (displaying a patient’s EKG), or store or communicate medical images. Only apps that control other medical devices would continue to be regulated. The 60-day comment period is open. 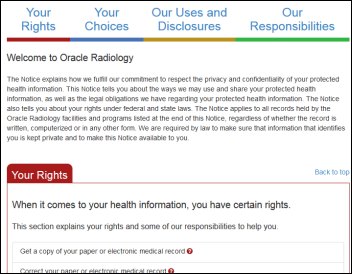 ONC will present a webinar on Thursday, June 27 at 1:00 ET on how to implement digital privacy notices on websites. PatientPrivilege won ONC’s contest to create compelling, easy to implement online NPPs – its example shows how one might look.

A Huffington Post article talks up Blue Button (and Humetrix’s iBlueButton) as a way for veterans to work around the never-ending DoD-VA EHR fighting, saying it’s easier for veterans to just download their own information and take it to whoever they’re seeing, including private practice doctors. 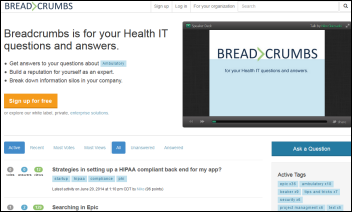 Niko Skievaski, the guy behind “Struck by Orca: ICD-10 Illustrated” (you have more time to buy it now that ICD-10 is delayed) has made the Breadcrumbs knowledge management software available for free. Users can ask questions and receive answers from the health IT community, members of which earn reputation points from the moderators.

A BMJ essay says evidence-based medicine is having a crisis, postulating that its promise isn’t being met because: (a) drug and device vendors have hijacked the process by manipulating clinical trials and publishing only favorable research to create “evidence”; (b) the amount of available evidence is unmanageable for practicing physicians, even with technology help; (c) the low-hanging fruit of managing established diseases has already been picked and the emphasis has moved to industrial-scale screening that may involve unexpected opportunity costs or unintended consequences; (d) less-skilled or lazy doctors may treat by template rather than by using experience and judgment; (e) EBM gives bureaucrats a way to impose rules that marginalize the physician’s skill and eliminate the opportunity for the patient to be involved in the decisions made about them; and (f) EBM works best for a single condition, which isn’t usually the case. The authors plea for a return to “real” EBM that uses the physician’s judgment, involves the patient, resists the use of “evidence” created by special interests, and places ethical care as its highest priority.

I’m fascinated that Google just bought home security and camera vendor Dropcam for $555 million in cash. The Wi-Fi video service offers live streaming, two-way talk, alerts, and night vision. Naturally I was thinking about healthcare uses, such as monitoring processes (like in the OR, pharmacy, etc.) or as a patient advocate wisely unwilling to leave a loved one lying in a hospital bed surrounded by potential misadventure. The company has lots of competitors, but their product looks simple to set up and my interest was more in the concept rather than the specific product. On the Big Brother side of the argument, I can just see a clueless, overly controlling Dilbertesque IT director demanding that work-from-home employees have the camera trained on their chairs at all times.