Thoughts on the months-late FDASIA report (based on an earlier work group report) that proposes minimal FDA oversight of healthcare information technology:

The FDASIA’s original work group whose recommendations from last summer were incorporated into this report contained an industry-friendly mix of members. By my count, 15 of the 30 members represent vendors or investors, six come from government or associations, four are academics, three are providers, one is from a testing organization, and one is a consumer.

From Jack: “Re: John Muir Health. It has been a long time coming, but we’ve arrived: our state-of-the-art electronic health record (EHR) and revenue cycle system are now live within John Muir Health! With today’s go-live, all of our hospitals, outpatient clinics, Home Health, John Muir Medical Group practices and several IPA practices are on our single, integrated EHR, as are our patients’ health records. This is great news for John Muir Health, and even better news for the patients and communities we serve. With the entire health system up and running on Epic, all patients will benefit from improved service and care coordination.”

Only 12 percent of respondents say they’ve benefitted as a patient from an HIE. New poll to your right: what force is to blame for the delay in ICD-10 enforcement? Clicking a radio button alone doesn’t provide much insight, which is why it would be swell if you’d click the “Comments” link at the bottom of the poll after voting to explain your position.

Listening: San Diego-based No Knife, apparently defunct since 2003 other than a few reunion shows. The were kind of emo-indie with quite a bit of complexity. Also: the re-formed and touring Zombies, with Rod Argent and Colin Blunstone (both 68 years old) sounding amazing on new stuff as well as “Time of the Season,” “She’s Not There” and Argent’s “Hold Your Head Up.” 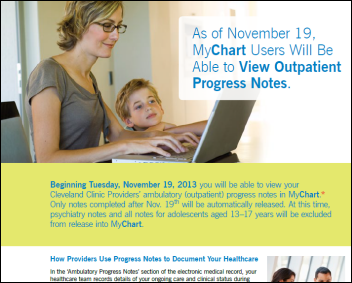 I added my Twitter support to the Thunderclap project of OpenNotes. As a patient, I should able to see the notes providers have made about me. The fact that this is a controversial issue tells you how paternalistic and patient-unfriendly healthcare is.

The Twitter word that signals someone is about to do some stealth bragging: “honored” (us when humbly but firmly announcing their recent success in being published, featured as a speaker, or given a high-visibility role.)

Interesting points on the big IPO of IMS Health. The company was taken private a few years ago and its three main private equity investors (who bought in for $5.2 billion) will nearly triple their money by taking it public again. As often happens when the private money guys take control, IMS has loaded itself with debt along the way, jumping from $1.3 billion in debt before they got involved to a current $4.9 billion. It will use the IPO proceeds to pay the debt down to $3.95 billion. Annual revenue is $2.5 billion.

Shares of athenahealth plunged 11 percent on Friday, with shares dropping 28 percent in the past month. 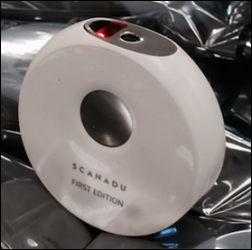 Scanadu starts distributing its wildly hyped $199 tricorder-type diagnostic to its Indiegogo backers, but has to stop when it finds a several problems, including algorithm errors, incorrect temperature readouts, and breakdown of the machinery that creates the device’s case. The Scanadu Scout can’t be sold until approved by FDA, so the backers had to sign up as study participants. With those kinds of problems, it’s a long shot that FDA will ever approve the device.

US CTO Todd Park has been minimally visible since the Healthcare.gov rollout fiasco and the ensuing Congressional subpoena, but he shared celebratory champagne with contractor QSSI early Tuesday morning after the site exceeded its goal of enrolling 7 million people.

The Wall Street Journal recaps the five states with the most problem-plagued health insurance exchanges, all covered here previously: (1) Oregon (still not working); (2) Maryland (dumping its dysfunctional system and moving to the one Connecticut developed); (3) Massachusetts (still not working); (4) Nevada (carriers are being sent incorrect information); and (5) Hawaii (not being used because state law already required employers to provide insurance).

Influential House lawmakers continued Thursday to press the Department of Defense and VA for failing to create a single EHR that would follow service members during and after their service. According to Rep. Rodney Frelinghuysen (R-NJ), who chairs the committee that funds the DoD, “It’s enormously frustrating. It makes us angry. … This is way beyond the claims backup VA has. It’s pretty damn important.” Rep. Pete Vicslosky (D-IN) added, “We fought a world war in four years. We’re talking interoperability of electronic medical records from 2008 to 2017, and I’m appalled.” The DoD’s assistant secretary of defense for health affairs says the current approach is to allow the two separate systems to talk to each other, which is says has been a problem nationally and why DoD wants to buy its own commercial product for $11 billion instead of using the VA’s VistA for free.

The State of Connecticut says that Windows XP, which finally goes off support Tuesday after Microsoft replaced it in 2008, still runs 20 percent of its computers, including all of the Department of Corrections and 43 laboratory instruments. The state is planning to pay Microsoft $250,000 to continue receiving Windows XP security patches, which may or may not keep it safe from potential HIPAA violations for running an unsupported and potentially compromised operating system. According to Microsoft, “Businesses that are governed by regulatory obligations such as HIPAA may find that they are no longer able to satisfy compliance requirements.” Another report finds that 77 percent of British companies still run XP and only a third of those surveyed plan to upgrade.

The Missouri House sends a bill to the Senate entitled the “Second Amendment Preservation Act” that would make it illegal for a healthcare professional to use an EMR that requires information about a patient’s access to firearms.


Maybe we really do need Amazon to get into healthcare. Check out its new Dash device that allows easy ordering through its AmazonFresh grocery delivery program (only available in Southern California, San Francisco, and Seattle for now.)


Billionaire AOL founder Steve Case decides on a whim to invest $100,000 each in all 10 startup teams pitching at the inaugural Google for Entrepreneurs Day. Among the companies funded is Nashville-based InvisionHeart, a Vanderbilt spinoff that is developing technology that converts EKGs to digital form for sharing in the cloud. 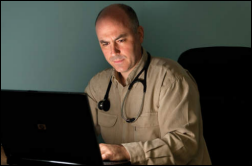 The two HIEs located in Columbia, MO (Missouri Health Connection and Tiger Institute Health Alliance) say they may talk about sharing information despite disagreements that arose when Missouri Health Connection demanded that Tiger Institute pay it. The current setup means that two Columbia hospitals could be close together but unable to share information because each participates in a different HIE.