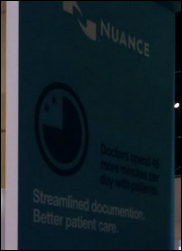 From Spelling Recognition: “Re: ‘documention.’ Is this a misspelling or or marketing gone wrong?” I suspect the former and dread the possibility of the latter.

From Born Free: “Re: HIMSS opening session. It was nice of the HIMSS chair to recognize physicians in the audience, but as soon as the recognized physicians sat down, the speaker then dissed them through sarcasm about their ego and the 6,500 physicians in his organization that think they know best. It was a little uncomfortable and not very wise considering HIMSS’s desire to add physicians to their membership rolls.” I missed the presentation since I was protesting having an insurance company millionaire talking about how healthcare should work. I don’t like having vendors as keynoters. 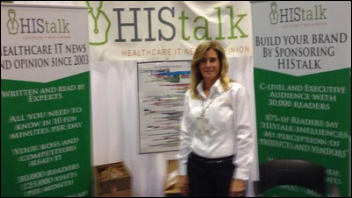 From IT Director: “Re: HIMSS. It was a pleasure to meet Lorre in the booth on Tuesday. If you are going to have a public face I can’t think of a better one! She was engaging and knowledgeable and fun to talk with even if just for a few minutes. I love the fact that you had a booth — that was a cool thing to do.” HIMSS booths are breathtakingly expensive, but it was worth it to be able to meet readers, sponsors, and passers-by (most of them on their way to bathrooms right by our booth given our tiny HIMSS clout and budget). It was great having Lorre there since as the only non-anonymous HIStalk team member since she kept me updated with who dropped by, what they had to say, and what it was like being on the show floor with the other exhibitors. That was all new to me – my only view of HIStalk is sitting alone in front of a PC all day and night. It was cool that other exhibitors brought celebrities to our booth, sent Lorre scones and fun giveaway items, and helped us figure out the exhibit process since we were clueless. I’ve asked Lorre to do a writeup on what it was like for her to meet readers, work the booth, attend the events, and accept our Sunquest Industry Pioneer Award.

From Brian Ahier: “Re: Ed Park of athenahealth at HIMSS. Gave the best presentation at HIMSS.” 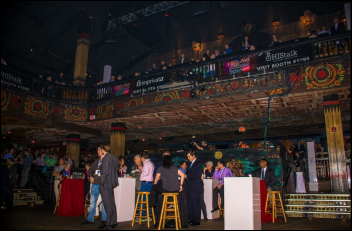 I’m glad the HIMSS conference is over. I’ll be catching up over the next few HIStalk posts. Your comments about the conference, exhibits, companies, and educational sessions are welcome.

I have to say I’m already dreading going to Chicago for the conference next year. All I remember from last time is snow, surly unionized conference center staff, outdated hotels that cost at least double what they were worth, endless cab lines because of the weather, and wearing winter clothes. I like Chicago as a tourist, but not as a conference attendee. HIMSS loves it, of course, because the travel is easier for their people and they get to deal their home city some payola. 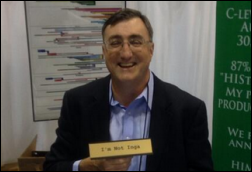 Orlando attendance set a record at an announced 38,828, although I don’t know how that number was derived. I assume all registrations were counted, including exhibitors and press, but I don’t know if HIMSS counted people sitting at home who paid $49 to watch streamed sessions on the Web. I know this: all event promoters like to provide optimistic attendance statistics and there’s no good way to audit their claims. 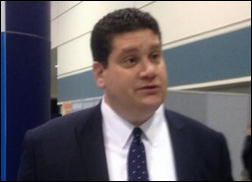 PeriGen was a booth neighbor and CEO Matt Sappern dropped by to say that “HIStalk is the only thing to read each day.”

This week on HIStalk Connect: Epic and Walgreens launch a wide-reaching interoperability partnership to rival CommonWell. HIMSS publishes the findings of its mHealth Technology Survey. Glooko unveils a population health tracker focused on improving care within the diabetic population. 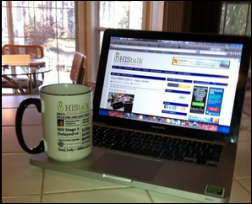 Jennifer Dennard (@SmyrnaGirl) tweeted out this photo, saying she’s reading up on HIStalk while sipping from our mug now that she’s home from the conference. Our mug supply is exhausted other than a few we set aside for loyal readers who asked us to mail them one since they weren’t at the conference. I like Jennifer’s photo – if you took a mug home, send a picture of it in its new home.

I didn’t hear much about Hillary’s Wednesday keynote other than (a) it was extremely short; (b) like any skilled politician, she didn’t really say anything other than predictably lauding the work of the crowd that brought her there and kissing up to HIMSS. I would have been mad about waiting an hour or two to squeeze into the huge room for her talk given its lack of substance. Hillary’s rumored minimum speaking fee is $200K plus expenses, so she took home a big paycheck in addition to potentially impressing would-be Presidential voters who were apparently happy just to bask in her celebrity.

Hillary mentioned in her speech that corporations don’t have enough females on their boards. She didn’t define “enough” quantitatively.

HHS confirmed during the conference that neither ICD-10 nor Meaningful Use Stage 2 deadlines will change. 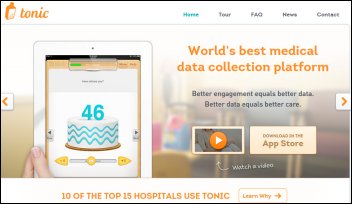