It’s early afternoon on Thursday and I just returned home. My feet look like little sausages from all the walking and the flight, so I am putting my feet up and getting out a quick summary of random impressions from Wednesday. I’ll provide a wrap-up by the end of the weekend. 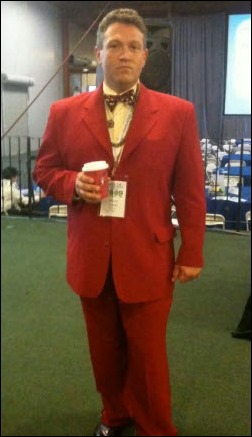 A couple of folks advised me that the guy in the red suit I noticed in the CareCloud booth was not an attendee but Stelle Smith from CareCloud. Maybe it’s the Miami influence? I had a chat with CareCloud CEO Albert Santolo, by the way, and will share more details on that later.

A word of advice: don’t walk around in public, especially at a place like HIMSS, and carry on a cell phone conversation that includes confidential information. As I was walking to the convention center I overheard a gentleman talking about “John Smith” who is over-compensated in his role, especially compared to the hardworking “Joe Brown”. Just so happens I know Joe Brown (who has a much less common name than Joe Brown) so it took me about two minutes to figure out the name of the company and the probable manager who is about to axe poor John. 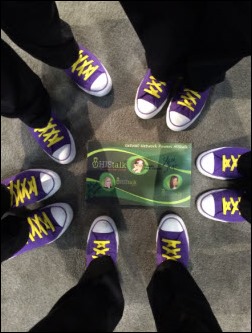 I love, love, love this photo that the GetWellHealth folks sent over. I considered asking them if they had an extra  pair in a size 8 but then realized I’d probably never have the right occasion to wear them. Well, maybe they would be fun for Mardi Gras.

As I walked by the Surescripts booth there was a representative standing out in the aisle who looked directly at my badge before saying hello. I was wearing an exhibitor badge and she immediately apologized and said she was told they were really only interested in marketing to providers so she was trying to see where I was from (before she wasted her time engaging me). I proceeded to tell her that that didn’t make much sense since they partnered with vendors (maybe she has never heard of “Surescripts certified products.”) I am pretty sure she was an employee and not a hired gun and she was clearly not some 22 year-old marketing intern. Odd. 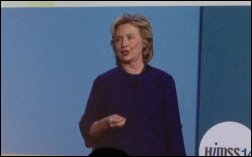 I went 45 minutes early and snagged a seat for Hillary Clinton’s keynote address. I happen to be sitting next to a guy from one of the better known HIT publications and he was telling me about the insanity of the whole “no press allowed” situation. His publisher was also exhibiting so he was able to use an exhibitor badge to get in. I laughed out loud when Clinton mentioned something about the “anti-journalist” mentality in Russia, wondering how many people caught the irony. Aside from that drama, I found Clinton to be very smart and a seasoned speaker. If she was reading from a teleprompter then she concealed it quite well. During the Q&A session she was just as quick on her feet as during her 20 minute prepared speech and she managed to throw in a little humor now and again. While she of course discussed the importance of HIT, I was fascinated with her comments on Russia, Ukraine, and the tracking of Bin Laden. 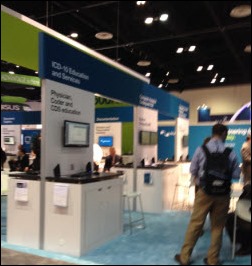 Nuance had a huge booth but I thought the lighting was odd. It was as if someone forgot to turn on the lights at the demo stations.

I played Pac Man at the Medseek booth. It took me 15 seconds to lose. 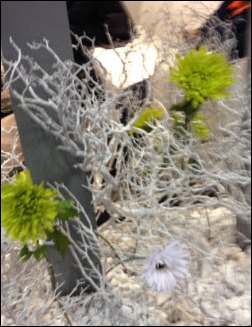 What was with the dead bushes decorating the NantHealth booth? I just realized that NantHealth is the new name for iSirona, which might explain why I found next to no signage with the company’s name.

I felt sorry for the exhibitors that were in the section past Cerner (7000s and above) because there was definitely less traffic than in the other section of the hall. There are probably a lot of people like me that make a conscious decision to start in the 100s and work their way through the hall, only to be fatigued before completing the journey. 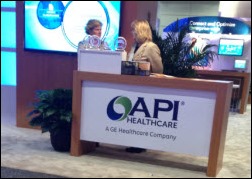 I met Brian Ahier who is a big Tweeter (@ahier) and HIT writer who often sounds good stuff to Mr. H and me. I get so excited when I get to meet HIT superstars. 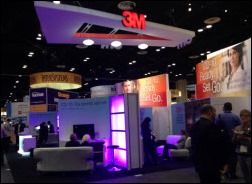 3M’s booth was much larger than I recall in recent years and all the signage was about getting to ICD-10. Strike when the iron is hot, I guess.

Speaking of ICD-10, I saw some Tweets that CMS Administrator Marilyn Tavenner said in her Thursday morning keynote that the ICD-10 transition would not be delayed. 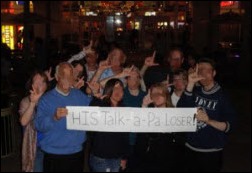 A few folks that didn’t get an invite to HIStalkapalooza decided to have their own party, which they called “HIStalk-a-Pa-Losers. They tell me they spent at least 10 minutes creating their banner and ended up having a fabulous time.

Several exhibitors told me that they were staying a few miles away from the convention center because there were not enough rooms in walking distance, especially if you wanted a large block of rooms. Unfortunately that’s probably going to be the case again next year in Chicago. 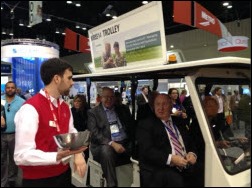 Holly sent me this picture of the guy I loved from SIS who was aggressively handing out goodies to folks passing by and even to  the people on trams. I incorrectly said he was asking, “Would you like gum, mints, or analytics for your EHR.” Actually SIS offers analytics for the “OR.” 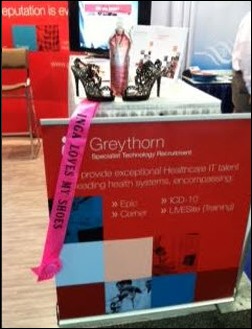 Dr. Jayne and I passed by the Greythorn booth and actually caressed the winning pair of shoes from the Inga Loves My Shoes contest. Apparently we were not the only ones so I am glad they had fun with the sash. 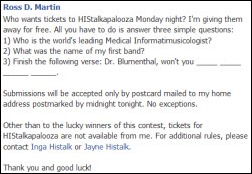 Ross Martin, who co-emceed the HISsies and provided some musical entertainment to start the evening, posted the above note on Facebook Sunday. He told me that at least a dozen people had asked him to find them a HIStalkapalooza invite. 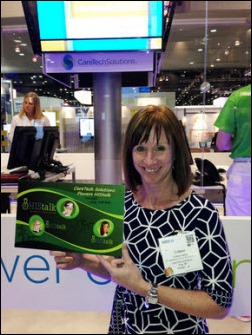 The CareTech Solutions folks wanted to make sure we knew they were proud of their sign.

The Versus folks put out this Tweet on Tuesday. I definitely took advantage of their hospitality. 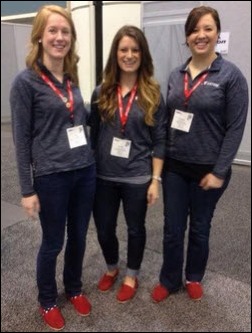 The T-System ladies were decked out in fun red shoes. 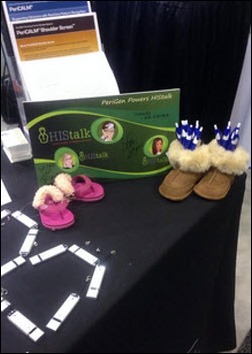 PeriGen had adorable baby Uggs as pen holders and baby flip flops right by their sponsorship sign. They were also giving out USB drives, which they had arranged to create the letters, “OB.” Very clever.

Mr. H had commented that people in the exhibit hall were “zombies” Wednesday and I was definitely one of them. Inga may perpetually be a 28 year-old party girl but unfortunately she has taken residence in body that is a little more mature. I think I’ll spend the rest of my day and evening on my couch wading through 2,000 emails and hoping my feet return to normal.