So much to share and not much time nor energy following a very long Tuesday and a very short night’s sleep. Coffee will be my friend today.

Random highlights from my day: 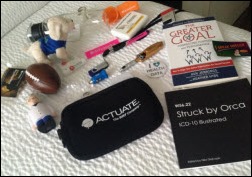 I did pretty good on the swag front, choosing to only pick up items deemed cool enough to lug home. One of my favorites is the stuffed yellow lab from Sunquest, which I intend to give to a special friend who has one of the real versions. I went to the Sunquest booth and asked to have one but was told they had run out. Lorre then went to their booth and told them Inga wanted one and curiously they found an extra. I also love the autographed copy of  Niko Skievaski’s Struck by Orca.

I played Medicomp’s Quipstar game and came in last place. Oh well, the Medicomp folks still cut an $1,100 check to my favorite charity. 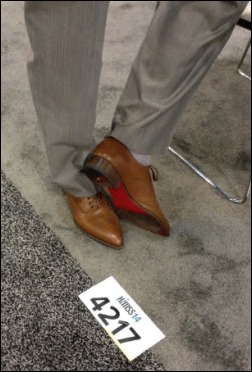 How about these booth shoes sported by Patrick from Lightbeam? 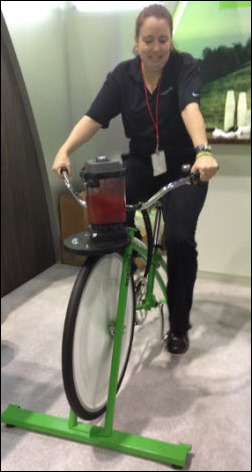 Humana was giving away smoothies that were created from a bicycle-powered blender. 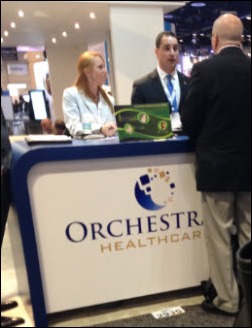 More than 100 vendors had requested desktop signs proclaiming their support of HIStalk. They are a bit of a labor of love to create and I was sad (hmm…annoyed) that a few opted not to display their signs after all. However, many thanks to those that I spotted, including Orchestrate, Summit, Bottomline, Forward Health, Awarepoint, Healthwise, GetWell, Imprivata, Infor, MBA, Versus, TeraMedica, Fujifilm, Netsmart, PatientSafe (their folks were also sporting HIStalk label pins), Greythorn (they had their sign displayed in a sparkly frame), TalkSoft, Health Care Software, Perceptive, and SIS. If you see one, please tell the booth folks that Inga sends her love. 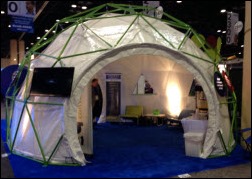 I really love most of the art in the Epic booth but this girl was a bit creepy because she looked a little too real.

This bear was a little more my style. 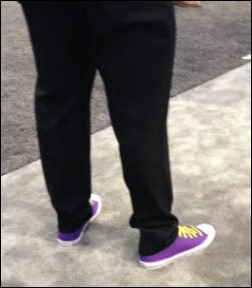 I loved the purple sneakers that the GetWellNetwork folks were wearing.

SAP had a big booth but Derek was out in the middle of the aisle trying to engage people in a very friendly and not too pushy way. 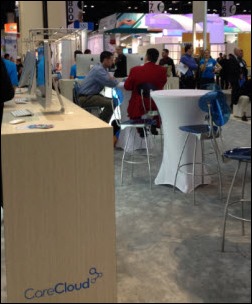 It’s a bit hard to see but this guy getting a demo in CareCloud’s booth was wearing a red suit. Um, you have to be pretty confident or a little color blind to wear a red suit. CareCloud, by the way, has a cool new booth with a balcony. 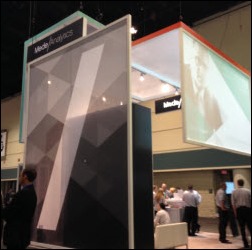 I liked the looks of the MedeAnalytics booth. This is actually the backside of it.

Every time I walked by IBM’s booth it was packed, but I could never quite figure out why.

Some of my favorite guys of the day were from Headspring, which was promoting a mobile nursing application.They were all in cowboy garb (because they are from Texas) and were standing out in the aisle handing out packages of nuts (which I happen to be eating right now for breakfast.) 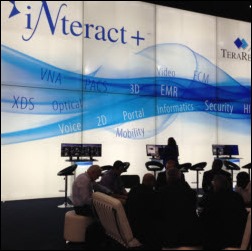 TeraRecon has this massive screen as part of their booth. I thought it overpowered their space a bit.

I went by CommonWell and was disappointed that when I asked what they did I was handed a marketing slick that showed the various members but was not given any additional explanation of what they were all about. I let them keep their slick. 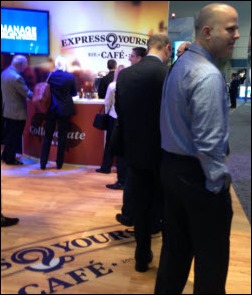 McKesson’s coffee bar was quite popular. If you are seeking coffee, however, many of the smaller vendors are also happy to give you a cup and most have shorter lines.

Kyle with INUVIO did a great job getting my attention as I walked by and then provided me a nice concise explanation of their card scanning solution. 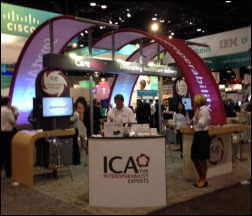 I liked the look of ICA’s booth.

Check out the magician at NTT’s booth. He had me intrigued. 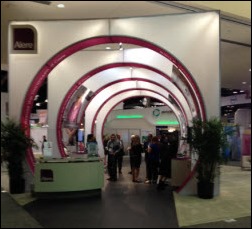 I had mentioned previously that Alere’s booth was one of my favorites and they were getting plenty of people walking through their tunnel.

The ladies at Dirvugent were super sweet and I liked that the company is donating money to a local children’s charity if you spin their wheel (and let them scan your badge.) 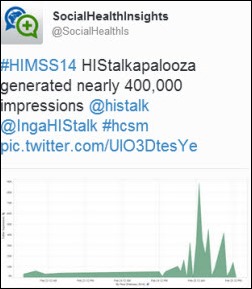 This is an amazing statistic.

Maybe someone can explain why so many people (all men that I observed) were walking around with Google glasses. Late in the evening I tried on a pair and didn’t see enough to make me feel compelled to buy some.

I had the opportunity to chat with Girish Navani of eClinicalWorks. He’s a really nice, down to earth guy and I will later share more details of our conversation, which ranged from eCW’s growth, to Girish’s intent to keep the company private, to his prediction for what HIT topics will be hot over the next couple of years.

I loved the pitch from the SIS guy as I strolled past their booth. He was sporting a red jacket, standing in the aisle, handing out goodies, and asking folks if they cared for mints, gum, or analytics for EHR.

I have another busy day planned and am very excited to see Hillary Clinton’s keynote this afternoon. Hope my feet survive.