From Dash Riprock: “Re: Allscripts. Cliff Meltzer leaving a year after being elevated to the tech savior is troubling. Customers give him credit for fixing the technology problems left behind by the previous executive team. Was it a difference of technical opinion or something else?” Allscripts seems to be betting its future on the hope that the recently acquired dbMotion and Jardogs will allow it to jump on the fashionable population health bandwagon to avoid the competitors that are beating it soundly in hospital and practice new sales, with hosting and add-on services generating recurring revenue from existing customers of products that are rarely mentioned these days (the stable of practice systems, Sunrise Financial Manager, the former Premise, Allscripts ED, e-prescribing, etc.) providing revenue to give the battleship time to turn. Putting Jim Hewitt from Jardogs in charge of development might reinforce that perception. Paul Black came from Cerner and that sounds exactly like Cerner’s strategy, other than Cerner was already highly successful with better management, the broad and deep Millennium product line was more credible, it developed rather than acquired its core systems, it knows how to meet the expectations of both Wall Street and clients simultaneously, and Cerner’s DNA doesn’t include the comically mismanaged Misys, Eclipsys, and late-stage Glen Tullman Allscripts. The Allscripts pitch seems to be entirely focused on population health and whatever of its pieces and parts can be cobbled together to claim a solution for it, and given the frothy enthusiasm in population health technology, why not? To the company’s credit, Wall Street seems to be buying it for now, probably because it’s trusting Paul Black to figure it all out. He’s been in charge since December 2012 and MDRX shares are up around 20 percent since then, although their performance lags the Nasdaq index, which was up up 30 percent in the same period.

From The PACS Designer: “Re: Apple’s LTE hub. As our IT environment fills up with more iPads, it becomes practical to ensure connectivity options are available no matter where you may be daily. With the Apple LTE communications function, everyone present can connect to the Internet and cloud services as long as at least one laptop is running the Apple iOS with the LTE mobile hotspot option. There is some disadvantage in that as more iPads join the group, the LTE network will have a slower response time for Internet queries.”

Buy Cerner shares if you want to invest in healthcare IT, poll respondents say. Looking back one year, your $10,000 investment would now be worth $22,488 (athenahealth), $14,811 (Cerner), $11,818 (Allscripts), $8,106 (Merge Healthcare), and $13,688 (Quality Systems). New poll to your right: how well do hospitals and practices use the data they already have to make improvements? Dr. Jayne pointed out that hospitals that don’t seem to have much interest in doing anything with the piles of data they’re already collecting are inexplicably salivating over big data. There’s no need for big data envy until you’ve wrung out every possible improvement from the “little” data you already have, which few hospitals and practices have done.

The House Oversight and Government Reform Committee subpoenas US CTO Todd Park to testify at its November 13 hearing about Healthcare.gov, saying that he is the only administration witness “unwilling to appear voluntarily.” The White House responded that the subpoena was not necessary since Park offered to appear in December after he finishes work on the struggling site. The White House says it will “respond as appropriate.”

Epic and service provider NNIT win a big EHR deal for all of eastern Denmark, beating out Cerner and IBM/Systematic. According to a press release translated from Danish, “We have chosen Epic and NNIT’s offer as the economically most viable. All three bids included good, professional suggestions for the healthcare platform but in the end we chose the offer that scored the highest on the parameters we had defined for the bid in advance. Now we look forward to seeing the positive effect for our professional users and not least the patients.” The project for Regions Zealand and Hovedstaden, which will involve 40,000 users, is valued at $180 million. The Denmark-based Systematic was probably the pre-decision favorite. NNIT, oddly enough, is owned by drug manufacturer Novo Nordisk and, not so oddly, is also headquartered in Denmark.

From the Allscripts earnings call Friday:

According to a tweet by former National Coordinator Farzad Mostashari, MD, the HIMSS EHR Association “can’t just say, ‘we don’t want FDA regulation.’ Have to work hard to make the (ONC) alternative work.” 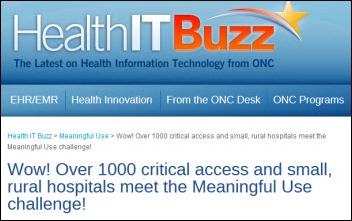 The PR company that manges ONC’s “Health IT Buzz Blog” wins a PR society award for their efforts. You might be surprised (but probably not) by how many company blogs are ghostwritten or edited by freelance writers and PR flacks, aimed at promoting rather than informing. HHS/ONC awarded Ketchum a $25.8 million public relations contract in 2010  because of its track record in gaining public acceptance for unpopular projects, placing provider EHR adoption and patient privacy concerns in that category. The government has a history with Ketchum: the GAO said that a 2004-2005 series of Ketchum-produced prepackaged “news” reports sent to local TV stations to run as their own, complete with actors pretending to be journalists reporting from Washington, were actually “covert propaganda” that failed to disclose that the government paid for them. 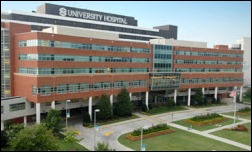 The CEO of University Hospital (GA) says hospitals will probably have to join in regional alliances to survive because of EHR costs and the Patient Protection and Affordable Care Act. CEO Jim Davis, whose hospital spent $50 million on Epic and is facing another $30 million in upgrades, is considering signing a shared services contract with Novant Health, saying he can’t compete with that organization’s 20-hospital economy of scale. “When Novant, which has 20 hospitals, does an upgrade on their Epic system, which takes a lot of work, they spread that cost over 20 hospitals.  When I do that same upgrade, I spread it over one. If I can be the 21st hospital that (cost) gets spread over, then everybody’s costs goes down.” He’s worried about PPACA because Georgia opted out of Medicaid expansion and even those who buy insurance will probably buy the cheapest plans with high deductibles and lower provider reimbursement.

Weird News Andy isn’t impressed with the excuse of a Florida doctor caught on surveillance video stealing a framed bird picture from Naples Community Hospital by slipping it under his white coat after hours: the doctor claims he was just borrowing it.

The city of Washington, DC seeks guardianship of its most frequent 911 caller, with its Department of Behavioral Health filing a court petition claiming that the 58-year-old woman (who was named in the report and in the newspaper story) has psychiatric disorders and insufficient mental capacity to make medical decisions for herself. The woman started calling 911 for fainting spells in 1997 and hasn’t stopped, racking up 226 calls and 117 ambulance transfers in the past year alone.

Monday is Veterans Day in the US, set aside to honor everyone (living and dead) who has served in the military. If you served, thank you. If you didn’t, thank them. Use hashtag #HonoringVets on Monday.

A reader asked me to re-run my 2007 list of EMR rollout rules. Here you go.

1. Your hospital will pledge to make major process changes, vowing to “do it right” unlike all those rube hospitals that preceded you, but the executive-driven urgency to recoup the massive costs means the noble goals will change to just bringing the damn thing up fast, hopefully without killing patients in the process.

2. The project and/or system must be anointed with an incredibly dopey and user-embarrassing name, preferably chosen from user submissions and with the offer of crappy vendor paraphernalia or lame IT junk as a prize, and also preferably made up of a far-fetched phrase whose contrived acronym spells out a medically related word or female name. Instead of inspiring the expected collegial chumminess among users, it will serve as a bitter reminder of the innocent, naive days between RFP and go-live before it got ugly.

3. Doctors won’t use it like you think, if at all, because hospitals are one of few organizations left that doctors can say ‘no’ to.

4. You’ll spend a fortune on mobile devices and carts that will sit parked in a corral due to the short life of their $100 battery and a dysfunctional but not yet fully depreciated wireless network, the keystone arches to the entire project.

5. All the executives who promised undying support to firmly hold the tiller through the inevitable choppy waters and who overrode all the clinician preferences in a frenzy of inflated self esteem will vanish without a trace at the first sign of trouble, like when scarce nurses or pharmacists threaten to leave or when the extent of the vendor’s exaggeration first sees the harsh light of day in some analyst’s cubicle.

6. It will take three times as long and twice the cost of your worst-case estimate.

7. You’ll pay a vendor millions for a software package consisting of standardized business rules, then argue bitterly that all of them need to be rewritten because your hospital is extra-special and has figured out the secrets that have eluded the vendor’s 100 similar customers. The end result, if the vendor capitulates, will be a system that looks exactly like the one you kicked out to buy theirs.

8. You’ll loudly demand that the vendor ship regular software upgrades to fix all the bug issues you submit, but then you’ll refused to apply them because you’re scared of screwing something up with the skeleton maintenance staff you can afford, given that millions were spent on systems with nothing left for additional IT support staff or training.

9. All those metrics you planned to collect to show how quickly the EMR would pay for itself instead show the situation unchanged or getting worse, so factors beyond your control will be blamed (like a ridiculously long implementation time that changed all the assumptions and external conditions) and ROI will not be brought up again in polite company.

10. No matter how unimpressive the final result toward patient care or cost, the EMR will be lauded far and wide as wonderful since the vitality of the HIT industry (vendors, CIOs, consultants, magazines, HIMSS, bloggers) requires an unwavering belief that IT spending alone will directly influence quality, even when nothing else changes.

Vince continues his fascinating HIS-tory of McKesson, this time covering its acquisition of IBAX. He’s looking as always for fun stories, photos, and memories from folks who were there and his contact information is on the last slide.