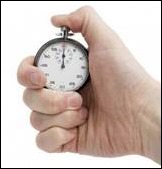 Mr. HIStalk ran a Time Capsule piece about electronic timekeeping systems earlier this week. Due to being on staff at several hospitals as well as working as a consultant and as a CMIO, I’ve been through more time and attendance projects than I can count. And definitely more than I’d like to remember.

Most hospitals I’ve worked at embrace two different flavors of timekeeping systems. The first type is the time, attendance and payroll system, used to track time worked for hourly employees as well as vacation, sick, and other time off for both hourly and salaried employees. The second type is the project-based time system, which allows for tracking time spent on various initiatives. Some IT organizations use this type of system for charge-backs to the departments utilizing IT services as well.

Our nurses complain bitterly about the rules that have been implemented around time and attendance tracking. They’re expected to clock in early enough to make it to their work area on time, but not too early or they will be penalized. When the emergency department nurses have to work through their designated lunch break (which happens more often than anyone would like) the procedures they have to go through to clock a “no lunch” and avoid having a break automatically deducted are akin to hopping on one foot while turning in circles and whistling the score from “Les Miserables.”

It’s so complicated that even though the system allows for nurses to bid on days off based on a request queue that looks at their seniority, work status, and previous holiday and weekend work schedules, many of the charge nurses schedule on paper because they have difficulty “seeing” the schedule and how it’s going to work out. Maybe it’s the user interface, maybe it was the training, or maybe it’s just the product in general, but either way people dislike and distrust the system.

Our department has a mix of salaried and hourly employees. We all use the same system, although our department isn’t configured with the capability to request days off. We still have to fill out a paper form and obtain a wet signature from our supervisor. Our shared administrative assistant keys in our time off once it’s approved. Even though I’m a salaried employee, I have to electronically approve my 40 hours each week and submit it to the administrative assistant to approve. I’d love to be able to go in and modify it to reflect the hours I actually work, but unfortunately that functionality would be an enhancement.

As if dealing with the time and attendance system isn’t bad enough, many of us have to work in project tracking systems as well. One hospital for which I did some consulting work tried to interface the project system to the payroll and attendance system. I’m glad I was not an employee (and also that I was not on that project) because it was a disaster. It was pretty easy to tell that whatever user validation testing was done was inadequate or nonexistent. The project system was only configured to track billable time and when employees didn’t have 40 hours on their project card, it automatically deducted the difference as vacation.

Apparently no one noticed that the project system didn’t have categories for the rest of the things that happen in a hospital IT department – drafting proposals, responding to customer inquiries, reading general emails, team meetings, collaboration at the water cooler, etc. Although it was easily fixed by adding all those tracking categories, the rollout left the teams with a bad taste that took more than a year to erase.

Whether time is billable or not, there is a great deal of data in project accounting systems. Many managers don’t know how to leverage it to determine if their teams are productive or not. It’s rare that I see managers compare hours among team members working the same projects or even spend time thinking about whether the time clocked is reasonable based on the nature of the project. It seems like people don’t realize their teams aren’t working as efficiently as needed until the overall project metrics show that staffing is over budget.

I’ve worked with a couple of managers who are really good at this, though. The best was an inpatient pharmacy project manager dealing with a large and complex build. She looked not only at how much time people were spending on comparable tasks, but was able to reference it to their weekly status reports and determine that some team members had as much as 50 percent more throughput than others. After doing some one-on-one assessments to make sure everyone was adequately trained and had the same level of competency (as manifested by error rates) she called the team together.

I was able to watch as the meeting unfolded because she asked me to be the neutral facilitator. Knowing what she had planned, I think it was also so she could have a witness in case the team tried to go over the table at her. She started innocently enough asking them to come up with a consensus response for a variety of questions about how long it takes to do various build tasks. Everyone was very open in the discussion. She took her time waiting for them to all agree on what was reasonable.

What they didn’t realize that she had all the project time and productivity numbers pre-built on a spreadsheet which she modified as she started asking the questions. By the end of the meeting, she had some interesting data that painted a pretty damning picture of how some team members were performing compared to what they all had just agreed was reasonable. At the same time, she had also created a road map for the rest of the project and let the team know she’d be holding them to the productivity parameters they had just defined themselves. Needless to say, they were speechless. They never saw it coming.

I kept a close eye on her team the rest of the build. Fortunately they handled themselves as professionals and I didn’t hear a lot of complaining or see a change in error rates. Maybe they were either embarrassed that they had just been caught sandbagging or were motivated to meet the goals set by the team – we’ll never know. They’ve been live for quite some time and they still use those same time estimates when scoping upgrades and revisions to the pharmacy database.

I have to admit I pirated her approach. I’ve used it to help novice physician leaders who have been told by their tech teams that it will take too long to build customizations that would make the physicians’ lives easier. The physicians can work through the average time needed to do x, y, and z tasks and compare it to the time that would be saved for end users or the quantifiable improvement in patient safety. I’ve used it with tech managers who are being held hostage by programmers who don’t want to exert themselves. I’ve also used it in the clinical office prior to doing time and motion studies.

I’m always interested in ways to better use the data at hand rather than having to implement new systems or use manual processes. Do you have creative uses for data from your time tracking systems? Email me.