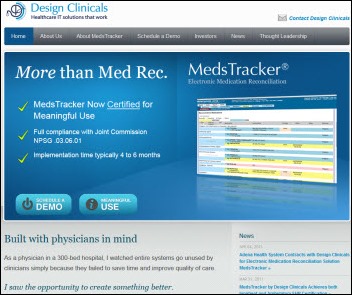 First Databank announced this morning that it has acquired Seattle-based Design Clinicals, which offers the MedsTracker clinician-friendly hospital medication reconciliation solution. FDB says the acquisition will support its ability to help hospitals meet the medication reconciliation requirements of Meaningful Use Stages 1 and 2. Terms of the acquisition were not disclosed.

According to Chuck Tuchinda, MD, MBA, executive vice president of FDB, “I am very impressed with the success that Dewey Howell has been able to achieve so quickly with Design Clinicals and MedsTracker. He has helped solve a vexing industry problem. We will now work together to develop an embedded solution so that our health information system partners can more easily integrate this medication reconciliation functionality within their systems.”

Seattle-based Design Clinicals has 40 hospital customers. The company was started by Dewey Howell, MD, PhD in 2005.

We spoke with Dewey Howell ahead of the announcement, who says the companies share a vision of reducing medication errors and improving patient safety. Design Clinicals built its modern Web app around FDB’s data capabilities. “The problem with med rec is that it involves nurses, pharmacists, and physicians,” Howell says. “All have important but distinct roles, and if any player doesn’t do their job, it all falls apart. We took three complex workflows and merged them into one so that each person has their role.”

“When medication reconciliation first came out, it was all about documenting lists and looking for drug duplicates and interactions,” Howell told us. “With Meaningful Use Stage 2 and beyond, a hospital might get feeds from an HIE or outpatient EMR and will have to decide what to do with these disparate sources of medication data. How will the meds get reconciled? It will be a much bigger problem a couple of years from now.”

FDB is transforming itself as more than just a data supplier. The company has developed Web services, widgets, and end user applications, with the customizable alerts tool AlertSpace being its first product. I interviewed Gregory Dorn, MD, MPH — now EVP and deputy group head of Hearst Business Media and president of First Databank — in September 2012, who described his vision for FDB and its new focus on raising the company’s visibility with end users.

The five-employee Design Clinicals team will stay on with FDB, with Howell taking a San Francisco-based role as VP of clinical applications. FDB will use the team’s knowledge to develop new tools for medication reconciliation at the point of care.