CIOs and CMIOs tell the HIT Standards Committee that Stage 2 MU needs to be delayed a year. They argue that EHR vendors will not deliver 2014 certified software updates in time for hospitals to implement, validate, and train on the changes and meet the July 1, 2014 deadline for starting the 90-day Stage 2 reporting period. The AHA and AMA also submitted recommendations to extend the MU timelines and make them more flexible.

Hot stuff this week from HIStalk Practice includes: comments on why EMR selection should not be based on features. MGMA urges HHS to conduct ICD-10 testing with external trading partners, including physician offices. Social media experts offer tips for physicians. Commentary on EHR vendor consolidation and provider dissatisfaction. EPs share their reasons for dropping out of the MU program. Legislation moves forward to to repeal the Medicare SGR payment formula and develop a payment program based on quality and efficiency. Nothing is more refreshing on a hot summer day than an ice cold beverage and a quick perusal of HIStalk Practice. Thanks for reading.

In implementing a new EHR, organizations typically focus on getting the software ready … building workflows, creating interfaces, and performing data conversions. Just as critical as having the software reflect the organization’s needs is having the go-live activities mirror the organization’s culture, goals, and end user support needs. This webinar will give an in-depth discussion of those items frequently overlooked and under resourced in bringing an EHR live. Encore Health Resources will share our experiences and lessons learned in supporting 28 go-lives for 22 facilities and over 10,000 physicians.

C-level HIStalk readers have provided presenter feedback and the session will be moderated by HIStalk. Register here.

McKesson’s Q1 results: revenue up 5 percent, EPS $1.83 vs. $1.58,  beating earnings expectations but falling short on revenue. Technology Solutions revenue was up 9 percent, with the company reporting growth in RelayHealth, McKesson Health Solutions, enterprise, medical imaging, and Paragon, which is tracking ahead of projections on getting Horizon customers to switch. Hospital Automation and International Technology have been moved to discontinued operations.

Vitera Healthcare completes its acquisition of SuccessEHS, which was announced June 17.

From the Quality Systems earnings call: the Hospital Systems business unit saw a 52 percent drop in revenue as it sustained a $2.6 million loss. The company said it caved in to the threatened proxy fight by dissident shareholder Clinton Group to avoid being “faced with what would be a two-month period of yet another proxy fight like we had last year.” The company says the proxy issue and rumors of a potential sale of the company hasn’t affected the sales pipeline. 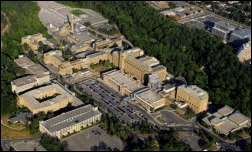 The Physician Alliance (MI) expands its use of Wellcentive to include Wellcentive Advance for creating a quality improvement registry.

The Regenstrief Institute and the International Health Terminology Standards Development Organisation will link their global healthcare terminologies LOINC and SNOMED.

Siemens Healthcare releases a series of nine videos recorded at the HIMSS conference in which experts address critical health IT issues using only three slides and three minutes. Above is our own CIO Unplugged and Texas Health Resources CIO Ed Marx talking about social media and the hospital CIO.

SCI Solutions announces the the integration of its Order Facilitator product with the Surescripts Clinical Interoperability network.

Healthcare Growth Partners releases its mid-year 2013 HIT Market and M&A review. It says that healthcare IT buyers will outnumber sellers this year, with competition keen for companies with strong recurring revenue, products that are beyond proof of concept, revenue of at least $5 million, software with strong ROI delivered as a service, and ideally with offerings that fit in risk-based models.

Users of pMD’s mobile charge capture solution increased their Medicare reimbursement by automatically scheduling follow-up visits for discharged patients that are reimbursed under two new CPT codes (99495 and 99496) that pay for transitional or follow-up care if the patient is contacted within two days, the company says. The company says its almost impossible to meet the requirements using a paper-based system because of the tight timelines. If your goal is amusement rather than reimbursement, check out the company’s FAQ page, which in answering a question about the types of reports provided, the answer is “completely, totally amazing ones.” 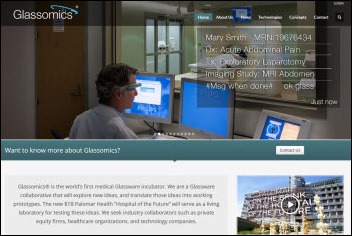 Above is the just-released TEDMED presentation by Harvard’s Isaac Kohane of the SMART Platform, which advocates the use of extensible, open source apps that sit on top of vendor EHR systems. 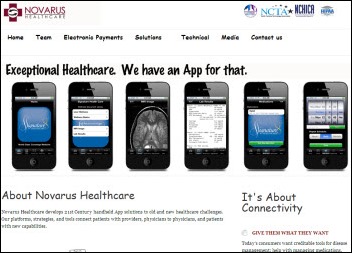 Philips Healthcare announces plans to start an incubator in Israel, where it has a large development center and has made previous acquisitions. 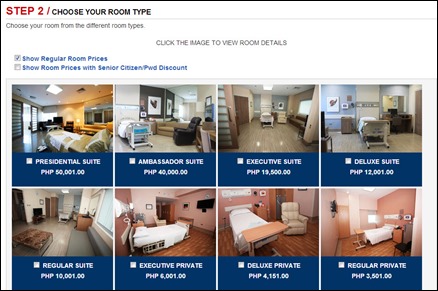 St. Luke’s Medical Center in the Philippines introduces an online service that allows patients to book their preferred rooms in advance based on price and room amenities. I kind of like the $1,155 per night Presidential Suite, which includes a receiving room, guest room, PC and printer, eight-seat dining area, and three plasma TVs.

The mail processing company for  Clark Memorial Hospital (IN) blames a “processing error” for sending 1,093 billing statements to the wrong address.

Ezekiel Emanuel, MD, occasional White House advisor and chair of the Department of Medical Ethics and Health Policy at the University of Pennsylvania, calls the U.S. News & World Report “Best Hospitals” rankings and similar rankings “flawed to the point of being nearly useless.” In an opinion piece published in the Wall Street Journal, Emmanuel says the criteria used for rankings are “unrelated to quality, easily manipulated, and incentivize the wrong choices and behaviors.” Emanuel contends that if hospitals showed more transparency about quality, patients wouldn’t need rankings to select the best healthcare.

A Harvard Business Review article suggests that organizations are asking too much of their CIOs, saying the next generation of CIOs will need to balance four personas: infrastructure management, integrating systems, business intelligence, and innovation, possessing an integrative mind, focus and vision, and a trusting and trustworthy nature. 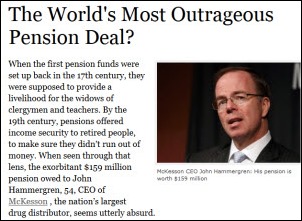 A Forbes analysis from last month of John Hammergren’s compensation titled “The World’s Most Outrageous Pension Deal?” says the McKesson CEO’s numbers are “utterly absurd”: a $159 million pension if he were to quit today, $131 million in one-year compensation,  a rumored $469 million if he’s fired by any new owners of the company, and $260 million due to his heirs if he dies or becomes disabled. The article says most companies other than McKesson cut back on very high CEO pension plans after SEC rules changed in 2007 requiring them to disclose those deals publicly. It also says the company gave Hammergren credit for years he didn’t work and pay he didn’t receive to come up with the big number, also waiving its early retirement penalty that applies to its other employees.

New analysis of CMS EHR attestation data for May by from Jamie Stockton of Wells Fargo Securities finds that Meditech, Cerner, and Epic hospitals lead the way in total numbers with over 400 attesting hospitals each, while Cerner, Epic, and HMS are the frontrunners in client percentages with 65 percent of their hospital customers successfully attesting. Trailing in customer percentages with 50 percent or less are McKesson (50 percent), Siemens (45 percent), and QuadraMed (25 percent.)

China’s public hospitals would collapse without the rampant bribery involving underpaid doctors and administrators, according to a Reuters review. New doctors earn $490 per month, the same as cab drivers, and without bribes would simply walk away from medicine. Patients are often expected to pay doctors extra in cash to ensure successful outcomes and to skip the line of waiting patients.

My “meeting of the week” award goes to our internal discussion on upcoming changes to the NCQA Patient-Centered Medical Home program, due to launch next spring. New proposed standards call for better integration between behavioral health and primary care. It seems like most of our time in primary care is spent in some flavor of behavioral health anyway – even when dealing with chronic conditions such as hypertension, diabetes, and hyperlipidemia, many of the best solutions are behaviorally driven rather than pharmaceutically derived.

This fifth version of the PCMH recognition program also aims to reduce duplicative testing, focus resources based on patient need, and emphasize outcomes. It sounds a lot like old-time family doctoring, when we aimed to treat what could be fixed as efficiently as possible and not waste resources when they wouldn’t change things.

Somehow I don’t think it’s going to be that easy, though. NCQA accepted comments (limited to 1,800 characters each) until a few days ago. The funniest comment was by my colleague who didn’t find out about the comment period until today, saying he was sorry he missed the opportunity to demonstrate the heightened abbreviation skills he’s mastered after a decade of using EHRs with character limits.

CMS will host a July 30 Webinar on one my favorite topics: Administrative Simplification. All medical students and residents should have to sit through a session like this so that they can see what they are really getting themselves into. If I had any idea how much I would have to learn about medical billing and other non-clinical arenas just to get by, I might have taken my sibling’s offer to pay for the LSAT exam a little more seriously.

Speaking of things that make physicians go “hmm…” the Washington Post runs a piece on doctors’ pet peeves. Items at the top of the list include patients talking on cell phones, late arrivals, no-shows, failure to share all information, lying, asking physicians to commit fraud, and “by-the-way” questions at the end of visits. I recently started moonlighting at a new emergency facility that is very busy and I’m trying to put a positive spin on the exhaustion. Maybe patients talking on the phone when you’re trying to interview them is a good thing – it’s a quick and easy indicator that you have time to run to the bathroom before you see them.

The MGMA Annual Conference is coming up in San Diego. Inga texted me the other day to see if I was ready to try to beat last year’s record for most parties attended by two bloggers in a single evening. Unfortunately, I’ll be sitting for the new Clinical Informatics board exam that week so I had to let her down gently. Hopefully I made up for it, though, by sharing the happiest bow tie I’ve seen this summer.