From Misys-Ex: “Re: QuadraMed. Something is taking place. Employees will learn Monday how much longer their employment will last. Some members of management have already packed their offices.” Unverified.

From The PACS Designer: “Re: absence. TPD will be taking a leave of absence from HIStalk to pursue a new development partnership in the healthcare area of expertise. While I will miss the interaction with my fellow HIStalk contributors, I will still read HIStalk regularly and contribute comments on postings when appropriate to do so for my fellow HIStalkers. In the mean time, you’ll be seeing guest bloggers contributing in my absence.”

Sixty percent of respondents think the Meaningful Use program should be ended after Stage 3. New poll to your right: would you choose a hospital for elective admission whose clinicians have complained publicly about the safety of its EHR?

Weird News Andy says “Sick Ambulance Kills.” A Washington, DC ambulance transporting a gunshot patient breaks down in the middle of I-295 when its EPA-mandated emissions device shuts the engine down for mandatory cleaning. The patient died during the 5-7 minute delay required to dispatch a backup ambulance. The EPA says it offers an exemption for emergency vehicles.

Montefiore Medical Center (NY) will buy Sound Shore Health System (NY), which filed bankruptcy on May 14 due to indigent care costs, a drop in patient volume, and a 2011 attempt to install clinical and financial systems, apparently from Allscripts, that continue to cause billing problems even now. 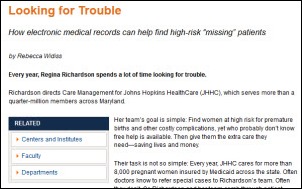 An article in the magazine of the Johns Hopkins Bloomberg School of Public Health describes the use of EMR information by care managers at Johns Hopkins HealthCare to identify women at risk for premature births and offer them specific interventions. Maryland’s Secretary of Health and Mental Hygiene hopes to use the information to dig deeper into population health, saying, “If you have a map, you might say, ‘All these different doctors are seeing what looks to them like a one-on-one phenomenon.’ But you can see actually it’s a certain community where there are very high rates of asthma. And maybe there’s something going on here… If there’s an anti-smoking effort, maybe the goal today is to hit the whole county. But if you knew that there was a very high concentration of smokers in a particular area and they were having very poor health outcomes, you might target particular buildings.” 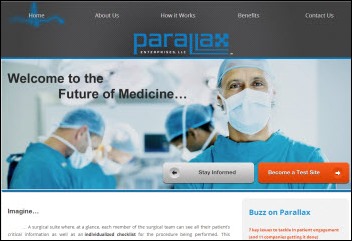 Maryland-based Parallax Enterprises begins development of a pilot-like heads-up display system for the OR that will display EMR information, a patient-individualized surgical checklist, and the patient’s health literacy score so that the OR team can communicate at the right level. I mentioned the company in February when it raised $1 million in funding, also noting the military pilot background of CEO Jeff Woolford, MD. Surgeons will use the  CHaRM heads-up display to interact with the system while remaining sterile. Surgeons can use the system by moving their hands above the sterile field thanks to gesture-sensitive cameras.

Interesting thoughts from Brandon Hull, co-founder of VC firm Capital Partners, at Internet Week New York: “Every other company presenting at Internet Week operates in a clearly defined market economy where we can easily identify buyers and sellers. Healthcare, by contrast, much more closely resembles a command economy full of price fixers and adjusters, oversight and bureaucracy. Stalin-era Soviet Union would be proud … [hospitals] have terrible business practice patterns, aren’t particularly well managed, and soak the federal government for vast subsidies to keep maintaining their existing behaviors. They’re going to be disintermediated.” He says the Affordable Care Act gives hospitals a cheap way to remake themselves into insurance companies in the form of ACOs, while insurance companies that fear being regulated like public utilities are rushing to become providers.

The New York Times looks at the $10 billion spent annually in the US on colonoscopies, observing, “Largely an office procedure when widespread screening was first recommended, colonoscopies have moved into surgery centers — which were created as a step down from costly hospital care but are now often a lucrative step up from doctors’ examining rooms — where they are billed like a quasi operation.” This is the first in a series of articles that will explain that US healthcare is disproportionally expensive compared to the rest of the world not because of heroic technical interventions, but rather the high prices charged for routine services in the only industrialized nation that allows providers to charge whatever they want without oversight except for Medicare and Medicaid patients.

I should hear from @histalk that my letter to @nytimes was published? #healthit as part of larger innovation strategy nyti.ms/136AwSU

@farzad_onc @histalk is where I go for all the news.@nytimes lags even when it’s in their own newspaper!;-)


It happened purely by accident that I was staying up late Thursday night as usual writing HIStalk when I ran across Farzad Mostashari’s just-published letter to the editor of The New York Times, earning the unwarranted but appreciated accolades of some of my favorite tweeple who must have been up late with me to read the new post so quickly.

An Atlanta-area newspaper profiles practice systems vendor Nuesoft, which says its partnership with Practice Fusion could double the company’s 140-employee headcount in the next two years and require  a $20 million capital infusion.

England’s Department of Health issues tenders worth up to almost $2 billion for physician office systems to replace the limited choices offered by the defunct NPfIT.

Vince finishes up the HIS-tory of Allscripts this week.