From HIPAA Faxing: “Re: HIPAA rules. Our esteemed EMR vendor wants $20,000 to connect each lab. The lab wants $19,990 to connect their side (funny how they charge the same). That’s $40,000 per lab connection and we use 17 labs and can’t afford that, so we use a fax server. What are the HIPAA rules around faxing? What do we need to do?” Experts, here’s your chance to contribute.

From Delta Don: “Re: Philips iSite. I’ve never seen anything like the disaster of the iSite 3.6 to Intellispace 4.4 upgrade. System and functional instability have pushed the go-live date back three times. It’s now six months late with new issues every day, but Philips personnel are enjoying their extra-long Memorial Day weekend. With vendor-neutral archives making migration among PACS vendors more feasible, you’d think there would be more effort. I won’t even start on the product name when we still have users calling it Stentor.”

Respondents weren’t overly impressed by the value to the public of the Medicare pricing information released by CMS. New poll to your right, as suggested by a reader: should Meaningful Use be ended after Stage 3 or continued? You’ll get a link to add your comments after voting, so you might as well expound on your position. 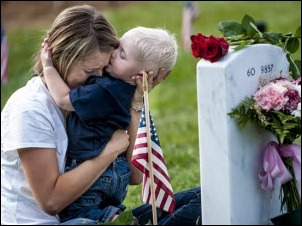 Monday is Memorial Day, set aside to honor those one million US Armed Forces members who died while serving. Their sacrifice allows you the luxury to decline to fly the flag, visit a military cemetery, or think about those who made the ultimate sacrifice on your behalf. That’s not to say it wouldn’t be nice to do it voluntarily. 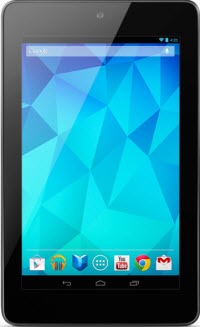 I impulsively bought Mrs. HIStalk a Google Nexus 7 tablet when I went to the office supply store to get several packs of the index cards I like to write on since she’s computer-averse and always gets my hand-me-down laptops. My initial assessment of the $199 device is that it’s very nice, in some ways better (sharper display) and some not as good (fewer apps) as the iPad mini, but at just 60 percent of the mini’s price, it’s a much better deal. Don’t buy it yet, though – an upgrade is imminent that will add greatly enhanced video.

From the Cerner shareholder/analyst call:

Jamie Stockton with Wells Fargo Securities sliced and diced CMS’s hospital EHR attestation database to find that 7 percent of hospitals that qualified for Year 1 incentives didn’t attest with the same vendor in Year 2. The interpretation was that the Year 2 incentives, which required participation for a full year, were too difficult for some hospitals to meet. The worst-performing vendor was McKesson, which saw its attestations drop off from 10.5 in Year 1 to 6.5 in Year 2, a 38 percent washout rate of an awfully low starting number.

Allscripts files a lawsuit against its landlord, Chicago’s Merchandise Mart, claiming its lease was violated by allowing excessive noise in renovating five floors just below the Allscripts offices for new (and largest) tenant Google. Allscripts is demanding that the Merchandise Mart stop using nail guns and pneumatic hammers during business hours.

Ed Marx posted an update to his most recent CIO Unplugged about a salesperson who hijacked Ed’s presentation with an overwrought sales pitch disguised as a post-presentation question. I’ll side with Ed. As much as salespeople have been educated (or brainwashed) to believe that their particular hammer is appropriate for any nail, I don’t think it’s acceptable to harass a speaker and audience just because they perceive that nobody’s returning their cold calls. Whatever happened to respecting the prospect enough to let them decide what products and services they want to consider and how they would like to evaluate them?

A New York Times piece by Tom Friedman says that Obamacare, the HITECH program, and HHS’s release of its databases has created a healthcare Silicone Valley that may improve care and lower costs because of the availability of information. Friedman spoke to a family doctor who thought she was giving appropriate colorectal cancer screening recommendations until her EHR showed only 43 percent of her patients had actually received the screening. Adding EHR alerts raised the number to 90 percent, leading to early cancer detection in three patients, which was obviously good for the patients but also for healthcare spending since early-stage treatment costs less. White House CTO Todd Park bragged on entrepreneurs who developed apps around HHS’s databases and kicked off a health data industry. Friedman met with Eviti, Teladoc, Humedica, and Lumeris. 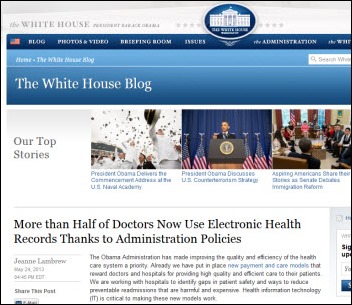 The White House Blog brags on EHR adoption, crediting the President who spent the money rather than the taxpayers who provided it.

Two people with no transportation experience are named finalists for the position of interim director of the Capital Area Transit System (LA.) One of them is Bob Mirabito, former CIO of Baton Rouge Radiology Group, who says his position was eliminated last year and he needs a job.

The Canadian government revokes the passport of a Quebec doctor who is of defrauding US Medicare of $375 million by submitting phony claims for homeless patients when he was practicing in Texas.

Weird News Andy says he has printing on the brain after reading that 3D printing allows replacing 75 percent of a person’s missing skull.

Vince continues with the very interesting HIS-tory of Allscripts.