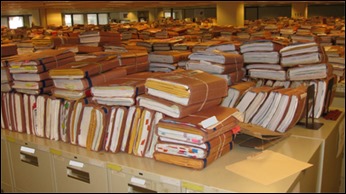 One of last week’s Morning Headlines posts mentioned the appalling situation of backlogged disability claims at the Department of Veterans Affairs. According to PBS, one site was so packed with paper claims information that the structural integrity of the building was compromised. A report from the VA Office of the Inspector General cited 37,000 claims folders stacked on top of file cabinets which “exceeded the load-bearing capacity of the building itself.”

Even more horrifying is what this represents – more than 800,000 veterans who are waiting for their claims to be processed, which can take over a year. The workload for disability reviewers varies from state to state, creating further inequity. Nebraska, South Dakota, and Maine have shrinking backlogs but the nationwide average wait time is 286 days for claim review.

I realize that the VA is not CMS is not Meaningful Use is not the Affordable Care Act. However, they all come from the same place. In the spirit of reform and pay for performance, I’d like to offer a new program for Congress to write into law. Any Meaningful Use, PQRS, or ePrescribing penalties should be placed on hold until the federal government shows it can get its own house in order. Since MU is grading me using a variety of metrics as a proxy for quality care, we can use the VA claims backlog as a proxy for process efficiency.

The VA is the quintessential government-run bureaucracy. It has a lot of advantages over the way that the rest of us practice – single payer, single set of regulations, and a well-defined patient population. By extension, the VA disability claims should be able to benefit from some of that homogeneity and be a pinnacle of efficiency.

Of course this will never happen since the whole bureaucracy is brought to us by the same entity responsible for the sequester debacle. I read with great interested about Vanderbilt University Medical Center and what they’re doing to balance their budget shortfall: halting employee accrual of vacation days, cutting discretionary spending, eliminating bonuses, and freezing salaries. VUMC plans to cut $20 million out of this fiscal year’s budget and $30 million next year.

To show solidarity with its constituents, I’d like to see members of Congress freeze their own salaries and benefits until they deliver a balanced budget and show that they have a plan for the future. While they’re holding off on penalizing us, they can also back off on MU (and other) audits to allow health care providers to actually focus on caring for patients. When their house is in order, then they can consider telling us how to run ours.