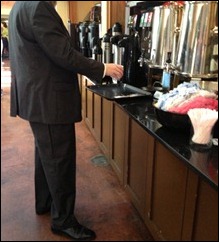 It was a rough start this Monday morning after a busy night of HIMSS social events with my BFF Dr. Jayne. Because of the water issue, the hotel had to brew coffee the old fashion way, which was not nearly fast enough for the caffeine-dependent masses. As I waited 15 minutes for the staff to bring more coffee, I watched person after person attempt to get a drop of caffeine out of the empty urns. 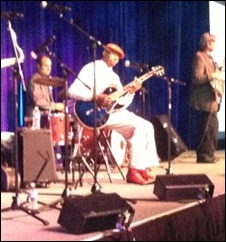 Dr. Jayne and I started our Sunday evening at the opening reception. The band was fun and the guitar player earned bonus points for his red shoes. 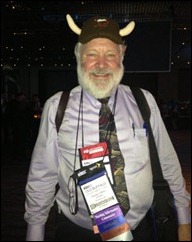 His nametag said “Old Buffalo,” hence the horns. I couldn’t hear the full explanation for his nickname, but I am sure he is fun to party with. Old Buffalo works for McKesson. 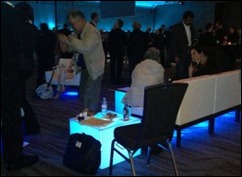 Mr. H liked the under-couch lighting and glowing side tables.  Who knew he was such a party guy? 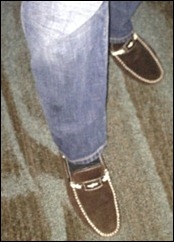 Of course I was on the look out for hot shoes, including these sporty loafers.

Dr. Jayne and I moved from the reception to athenahealth’s soiree and spent a few moments chatting with the dapper Jonathan Bush. 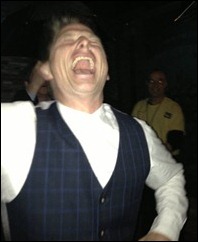 Not surprisingly, Jonathan got happier as the night progressed.

Definitely one of my favorite looks for the evening. 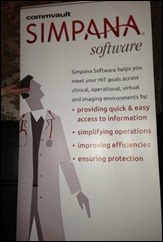 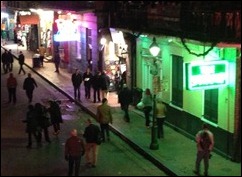 Our next stop was the CommVault party, where Dr. Jayne and I hung out on the balcony. Our biggest disappointment was the lack of beads to throw to the folks on Bourbon Street. 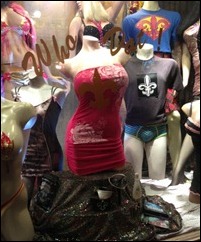 On the way to the Divurgent event Dr. Jayne and I did a little window shopping. These were a few of tamer PG-13 items.

I am out the door early for a big day at the convention center and a bigger night at HIStalkapalooza. Can’t wait.

I’m not as fast as Mr. H and Inga in getting my HIMSS write ups done, so this is my catch-up from Sunday’s events. It’s Day Two of the water supply problem and subsequent boil order and one of my staff back home decided to send me an article about how bathing is not recommended in New Orleans. Having just been out for a run, this was not welcome news, but some quick Googling revealed that it’s not recommended for infants to bathe in water that hasn’t been sterilized first.

My trip in was uneventful except for the plane being at least two-thirds full with HIMSS attendees. Those of us in the coveted exit row seats decided we should just exchange cards and hear the various pitches on the plane and make our work more efficient – kind of like speed dating for vendors. Alas it was not to be, but I did make a new friend who hopefully can help me with some analytics initiatives.

Last night’s opening reception was nicely done, with minimal lines at the bars and reasonably good food. My only complaint was the dimness of the room, which although great for cozying up to your colleagues, it made it hard to read name tags. At least that’s the excuse I’m using for randomly accosting a poor unsuspecting physician who I thought was a friend of mine. After he recovered from the unexpected hug and I figured out he was not the CMIO I was looking for, we had a nice chat and exchanged cards. I appreciated his good humor about the whole thing.

Our next social event was an athenahealth reception at the House of Blues, where we were treated to a jazz funeral procession (complete with mourners and a mock coffin) and bid farewell to Software. The food was good, although I was a little puzzled by the sliders that had pickles and cucumbers rather than pickles and catsup. Fried okra balls were definitely the highlight.

After that we joined our friends from CommVault at Bourbon Vieux and enjoyed the balcony over Bourbon Street. It was still early in the evening so the debauchery wasn’t quite to the level I’ve seen it on previous trips. The party was low key and the band was good, with their breaks allowing a bit of quiet to talk to other attendees. I added a couple of stops to my “must see” booth list based on the networking, so hopefully I can knock out some equipment purchase decisions tomorrow.

Our last stop was the SummHIT mingle sponsored by DIVURGENT, which was held at The Swamp, which happened to be directly across the street from Bourbon Vieux. The lower level of The Swamp has a mechanical bull-type “Thing” that could be ridden although I didn’t see any takers. Inga and I did get some beads, however, and didn’t even have to work for them. Although we were feeling the Mardi Gras vibe by this point, we knew we needed to get our beauty rest for the long day ahead so headed back to our hotels.

I’m off to the exhibit hall (and to compete in Quipstar at the Medicomp Systems booth) then of course to HIStalkapalooza. See you there!