From AlohaSally: “Re: acquisition. Word on the Street is that Epic consulting company [company name omitted] just sold for $40M. Not shocking as I’ve heard stories owners were focused on building to cash in. Will they maintain culture under new identity?” We asked the company, which said they would provide a response but haven’t so far. The wording of their reply and the timing of the rumor give me the feeling that something is indeed afoot. A transaction in that price range would probably warrant a Monday morning announcement, especially assuming that companies with $40 million to spend know how to publicize themselves. As to your question, I don’t know if I’ve seen an example yet where an acquired company’s culture isn’t replaced almost immediately with that of the acquirer, sending some of the consultants and sometimes the clients themselves fleeing depending on the degree of change. It’s like a software vendor forcing clients to migrate from a retired product to another company offering – it may be perfectly fine, but it’s not what you signed up for.

Perhaps I should title this “From New Orleans” since the conference hasn’t started yet as I write this Saturday. In any case, I arrived with no problems. The airports were teeming with spring breakers headed to Mexico and other warm climes. The New Orleans airport, which seemed to me to be small and old, was already overwhelmed even though most of the ingress will be Sunday. Taxi lines were running 30-45 minutes, so who knows how bad it will get Sunday since the number of cabs is finite.

The cab fare to downtown is a fixed $33 for 1-2 passengers, and don’t even be tempted to save a few dollars by taking the shared shuttle, which earns nearly universally negative reviews. Single travelers, which I would guess make up the majority, would be better off to self-organize the line into groups of two or three folks going to the same or close-by hotels, thus not only saving time and money, but freeing up a cab for someone else. Thank goodness a new law (which the taxi companies threatened to strike over) requires cabs to accept credit cards, which any city hoping to lure visitors should do.

My impressions of the ride from the airport to my hotel, courtesy of the billboards lining the rather unattractive route: people come to New Orleans to eat, buy hot sauce, and visit strip clubs. 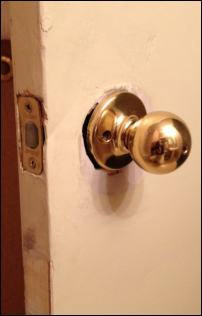 I mentioned that HIMSS dumped me off to a hotel I didn’t reserve when mine became oversold even though I made my reservation in September (how did that happen?) Note the fine craftsmanship on the bathroom door that $200 a night gets you (yes, that’s a half-inch of nothingness between the knob and the closest available wood). The “we care about the environment, so don’t make us wash your towels” sign is adjacent to a faucet that leaks in a constant stream and the full-length mirror threatens to fall off the door since two of its six holders have broken off. At least the Internet speed is good (until everybody else checks in Sunday), the bed and TV are huge, and the location is excellent.

Weather wise, it’s around 50 and mostly cloudy (downright gloomy at the moment) with a freeze warning in effect for tonight, with similar weather predicted for Sunday before a big warm-up Monday. It’s slightly springy with green grass and early leaves.

I’m patting myself on the back for my wise decision after suffering through too many HIMSS conferences trying to write voluminous HIStalk posts using the Chiclet-style keyboard of my intentionally small laptop. This time I prepared by buying a USB-powered trackball and full-size keyboard, having realized that the screen size isn’t the main challenge, it’s the input devices, and they take up almost no luggage room.

Sunday is open for me since I didn’t sign up for any of the paid workshops, so I’ll just stroll around a bit, drop by the convention center to pick up by badge, and stop by the opening reception. It’s not only cheaper to fly in on Saturday, it makes Sunday a relaxing day.

I see on Twitter that bunches of HIMSS attendees are limbering up their fingers preparing to unleash a non-stop barrage of tweets about everything they see and hear all week. The online noise will be deafening, so I would guess that nobody’s going to read most of what’s being indiscriminately spewed.

Inga, Dr. Jayne, and I will be posting all week. Send us anything we should include – photos, rumors heard, and insightful observations. We never seem to get enough HIStalkapalooza pictures to satisfy everyone, so snap some shots there Monday evening. Help us figure out the prevalent themes of the conference since attendees often miss the forest for the trees (and the social distractions.) News and rumors will abound and we like hearing reader reactions.