QPID, a startup that will commercialize technology developed by Massachusetts General Hospital (MA), announced its launch today. We spoke to President and CEO Michael Doyle, formerly of Medsphere, ahead of the announcement.

Doyle says that QPID, which stands for Queriable Patient Inference Dossier, was created five years ago by a Mass General interventional radiologist working with a computer scientist. The radiologist found the time required to manually look up patient information on the EMR was prohibitive. The pair automated the process using natural language processing that can search both structured and unstructured data.

Doyle says that the demand from other Mass General radiologists and then gastroenterologists pushed QPID’s usage to an eventual 15 hospital departments. Gastroenterologists, for example, perform a search on all patients scheduled for colonoscopies 30 days before the procedure to look for problems such as active anticoagulant orders or sleep apnea that would require the patient to bring their CPAP machine for use during the procedure.

“Twenty percent of the colonoscopy procedures at Mass General were identified by QPID as patients needing additional pre-procedure preparation,” Doyle told us. “The system crawls the medical record looking at both structured and unstructured data. Conceptual queries have been built around it and it searches for relevant things in the patient history that will make a difference in the procedure that’s being done.”

According to Doyle, “We’ve got 5,000 physicians using this at Mass General Hospital, Brigham and Women’s Hospital, and Newton-Wellesley Hospital. We touch 7,000 patients per day and do 50 million searches each month. It creates meaning from EHRs, which are really a data repository that is extremely difficult to get information out of in a form factor that’s timely for the physician to make a clinical decision.” 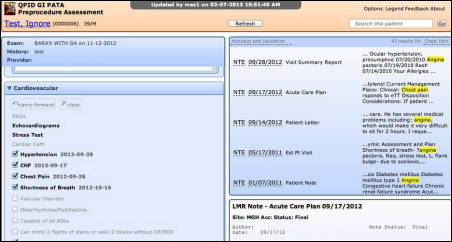 Doyle says the NLP engine was developed internally and can handle misspelling and inconsistent terminology, providing the user with user confidence intervals along with its findings. He says Mass General physicians call it “Google for the EHR,” but Doyle emphasizes that QPID’s results are derived from clinical relevance rather than simple popularity. QPID can operate with any EHR, requiring a read-only connection via HL7 feeds or Web services.

QPID will be targeted to academic medical centers, initially to radiologists. “If we go into the CIO’s door, they’re inundated with Meaningful Use and everything else. We’ll go to department chairs in radiology, gastroenterology, or surgery. They will get it immediately,” Doyle told us.

Doyle says QPID will eventually help health systems position themselves in a market shifting away from transactional systems and fee-for-service reimbursement. “Mass General is never going to compete on cost,” he says. “But they can compete on the most appropriate care for the patient. Let’s say we know, based on the type of procedure, there’s national data that says there’s a 15 percent mortality rate. QPID can look at the current state of that patient, compare their index to national numbers, and allow surgeons to recommend a different procedure that’s less invasive.” That, Doyle says, will allow hospitals to justify their treatment plan to patients and insurance companies based on the condition of individual patients.

QPID is backed by Boston-based Matrix Ventures as its first healthcare investment, with additional investment from the Partners Innovation Fund and the Massachusetts General Physicians Organization.