From Jenny: “Re: Catholic Health Initiatives. The group is installing Cerner, but the Tacoma-based Franciscan group received permission to install Epic in five hospitals and will go live in April 2013.” Verified. 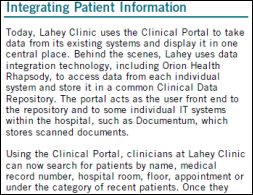 From Pillsbury DB: “Re: Lahey Clinic. They were installing Allscripts in the ambulatory environment and had a best-of-breed approach using Orion for the inpatient setting. I’ve attached an old case study.  Instead of implementing a true EHR product, they decided to pull data using Orion into a clinical data repository. Paper-based data was scanned and indexed into PDFs which were also available using Orion portal. This worked for clinician viewing, but made it impossible to implement CPOE. They were also scanning millions of records per year requiring many FTEs to perform the function. When HITECH hit, they had no hope of meeting any stage of MU.  To compound the problem, the Allscripts implementation was about a year behind and way over budget.” Above is an extract from the Orion Health case study from last year. I guess MU did reduce the interest in EMRs based on scanned documents quite a bit. 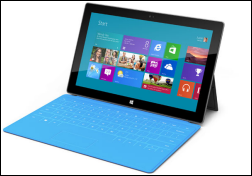 From The PACS Designer: “Re: Microsoft’s Surface tablet. The new challenge to the iPad has arrived in the form of a tablet PC called Surface. One unique aspect of the Microsoft Surface is the keyboard in cover of the tablet. While it won’t really be any threat to the iPad, it may draw interest from PC users who are more comfortable with a traditional keyboard versus an on screen keyboard.” Microsoft has been short on innovation lately (decades), but I don’t get why they used the Surface name on a tablet when it’s already being used by their coffee table gesture thingy. And unlike Apple, Microsoft is selling futures once again since nothing’s ready to ship. They won’t get bold on the pricing because they won’t want to diminish the already iffy prospects of the Ultrabook laptops, so you’ll be able to buy a me-too tablet running probably buggy software for double the price of iPad right as businesses give in and let people bring in their own at zero expense to the enterprise. Apple started failing dismally after firing Steve Jobs and returned to prominence only after they hired him back, but Microsoft’s problem is that Bill Gates isn’t coming back.

I’m doing some traveling for the hospital over the next few days (to a vendor location home to a great many HIStalk readers, in fact), so given the difficulty in achieving my usual prodigious output given limited time and connectivity, Inga is handling the brunt of the HIStalk chores. I’ll chime in with whatever is interesting to me as I have time. If you’ve tried to get in touch with me, hang in there until the weekend when I can get caught up.

Shareable Ink secures $5 million in series B financing from Lemhi Ventures.  As part of the deal, Lemhi Ventures’ managing partner Tony Miller will assume the role of chairman of the board.

ESO Solutions, a provider of EMR software for the EMS and fire services industries, raises $4 million from Austin Ventures.

The Newfoundland and Labrador Centre for Health Information sign agreements with Telus Communications and Orion Health to provide technology for a province-wide integrated EHR.

MyHealthDIRECT adds HealthWays VP and COO Tom Cox and SSB Solutions chairman Jacque Sokolov, MD to its board of directors.

The HIT Policy Committee’s Quality Measurement Workgroup and the HIT Standards Committee’s Clinical Quality Workgroup ask for input on ways in which Stage 3 MU may advance the delivery of high-quality care in diverse care settings.

The White House recognizes 82 providers for their successful implementation of EHR at a Health IT Town Hall in Washington, DC.

VA officials tell lawmakers at a House Veteran Affairs Committee hearing that it has processed fewer than 800 benefit claims despite investing $491 million in new technology. The current backlog is 913,690, which includes 575,773 claims older than 125 days. The VA originally promised a system-wide rollout of its Veterans Benefits Management System this year, but performance issues have pushed full implementation until the end of 2013.

The Military Health System issues an RFI for a system to track lab work within its integrated EHR.

Joe Goedert writes a Health Data Management article describes pending federal legislation that could be the first steps toward regulation of healthcare IT.

The US Supreme Court refuses to consider an appeal by former McKesson Chairman Charles McCall to overturn his 10-year prison sentence for scheming to inflate company revenue.

New from Ross Martin MD:  The Money Machine, which he says appropriately describes your financial hamster wheel, whether it’s the usual problems or EHR adoption or whatever. 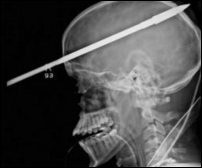 Weird News Andy admires the dry analysis of a doctor describing a 16-year-old accidentally shot through the head with a three-foot-long stainless steel fishing spear: “It’s a striking injury, something you don’t see every day … the first obstacle is to not be distracted by the obvious sensational aspect of the injury.” The spear missed most everything important in the boy’s head, doctors removed it, and he’s expected to make a near-full recovery.

WNA also finds this story interesting. A man told by a hospital that his cancer left him with just months to live, along with his wife, rack up $80,000 in debt to complete a hastily compiled bucket list, giving away $30,000 worth of goods, selling their house at a loss, cancelling their health insurance, and traveling the world. The man even takes up smoking again, figuring he has nothing to lose. He then waits to meet his maker, vowing to kill himself if the pain became unbearable even as he questions why he seems so healthy. Finally his hospice worker told them the hospital had made a mistake but didn’t tell him – he’s fine.