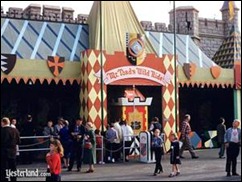 I’ve been having a hard time sleeping lately. Maybe it’s the recent time change, or maybe there’s just too much going on at work. Maybe I’ve got spring fever or just a touch of unfulfilled wanderlust. I’ve enjoyed taking some long walks in the evenings and sitting out on the patio listening to mellow David Gray tunes as I deliberately wind down from the ever-lengthening days.

I suspect it’s the proverbial “too much going on” because I also developed a touch of writer’s block. A friend of mine works in the industry, so I asked him for inspiration with this question: as a person in the trenches, what kinds of things keep you up at night?

What he came up with was a question for me: will Meaningful Use really decrease the cost of healthcare and increase continuity of care, or is it just additional overhead where no one really knows how to administrate the benefit it could provide?

I’m going to take off my politically savvy “plays well with others” hat and put on my “doc in the trenches” hat for a bit here. The answer is I really don’t know. Many health systems have been practicing what Meaningful Use preaches for years prior to the incentive program. They’ve implemented patient portals, obtained unified data, and achieved transparency of the medical record. They conduct group visits, run non-traditional schedules, and encourage both patients and employees to use personal health records.

IT systems are in place which support evidence-based care and encourage disease prevention and health promotion. Providers are graded on the care they deliver and are presented with opportunities to intervene where care can be improved. Providers in these health systems are discouraged from ordering unnecessary tests and ineffective treatments through both payer and quality initiatives. In many organizations which are true integrated delivery systems, referrals are closed loop and carefully controlled as well.

Despite these efforts, many are not seeing overall costs come down. Patient insurance premiums definitely aren’t decreasing. We know that certain episodes of care can be made more cost effective and we can leverage technology to prevent many harms. We’ve all watched the recent debate over the Health Affairs article that showed that access to prior results didn’t decrease ordering of tests. We understand that test volume alone isn’t a reliable indicator of whether we’re successful. I have seen data on primary care practices whose ordering volume spiked after EHR implementation, but when you drill down, a large number of those tests were preventive. That seems to indicate that clinical decision support is working.

If you watch those practices over a few years or so, however, the ordering tapers off. It’s almost as if providers are playing “catch up” for the tests they missed while they were too busy addressing acute illnesses and complex chronically ill patients. If you look at labs that are ordered to diagnose illness or monitor chronic conditions, we didn’t see as many spikes. I wish hospitals and provider groups would have had the resources to do better prospective studies as they implemented, but unfortunately, most of us were focused on system build and implementation. It would be nice to look at it other than through the retrospectoscope.

I do think advances in healthcare IT have significant potential to increase continuity of care, but it is unclear whether MU is really a driver. Over the last decade, we’ve seen RHIOs fail despite significant clinical potential. I’ve seen the accessibility of information increase dramatically in both the ambulatory and acute spaces as well as between them. We have data at our fingertips instantly that would have taken hours or days to obtain previously.

We have the potential to avoid duplication of tests and therapies, with one caveat – caregivers have to be allowed the time to intelligently process the burgeoning amounts of information relevant to each patient and his or her care. Unfortunately, our payment system is still largely volume driven, often resulting in fewer and fewer minutes for each patient contact. Patients in the hospital are sicker and they’re going home sooner, making the task even more difficult.

Meaningful Use is certainly additional overhead. Of that there is no question. The cost to implement certified technology is significantly higher than the payments received. I hope anyone who actually believes differently is willing to share whatever psychotropic substance they’ve gotten a hold of.

Hospitals and providers are simply running to catch up and to make sure they avoid the payment penalties that are coming. Meaningful Use has derailed other initiatives as budgets have shifted to accommodate timelines which are faster than some groups were prepared to implement. I know that’s the point – to speed things along for laggards – but some groups and hospitals were simply proceeding at a more deliberate pace relative to their own goals and priorities.

I wonder how many people at ONC have visited a practice that has cut back on improvements to the physical plant, supplies, or clinical equipment due to the increasing IT budget? I know I’ve been to quite a few. I’ve seen state-of-the-art computers sitting on decaying countertops that can’t be properly sanitized. I’ve seen budgets for continuing education and clinical in-services eliminated in favor of application training and time spent in endless debate about the validity of various order sets.

I’ve seen much more, but it’s too depressing to put into words. The amount of money spent on MU consulting alone is absolutely staggering.

Physicians seem increasingly susceptible to burnout, and the cost of that unintended consequence can’t be readily quantified. This also applies to nursing staff, pharmacists, ancillary staff, and pretty much anyone who works in support of patient care. IT staff are also under increasing stress. We all know stress and burnout diminish productivity and put patients at risk.

Only time will tell whether Meaningful Use will be truly effective in changing the way we deliver healthcare and how much it costs. In the mean time, we’re all going to work longer and harder and get by with less in some respects. We’re going to do some amazing things, but not without a price. Fasten your seat belts, folks. It’s going to be a wild ride.

And for those of you who know your Disney history, remember this: Mr. Toad was only a C-ticket ride.