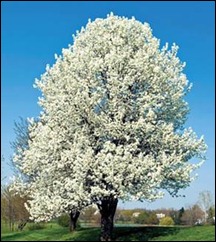 I spent the better part of today taking a tree down. It might surprise some of you, but I do know my way around bow saws and chain saws as well as scalpels. Unlike the delightful specimen above, mine was extremely close to the house and required yearly maintenance. It also had some other unsavory features, and since today was a beautiful spring day with a light breeze and not too much sun, it was time to get it done.

It would have been easier if the tree were ugly or diseased, but unfortunately this particular tree was in full spring bloom. Most of the trees I’ve been involved with taking down were diseased, in wooded areas, or part of a service project where everyone understood why they needed to be removed. I’ve never had to do one right next to the house in full view of the neighbors and everyone else who passed by walking dogs or enjoying the spring weather.

Not surprisingly, people had things to say about the tree coming down, and I started to question my decision. To the casual observer, a beautiful tree was being removed. The casual observer, however, didn’t ever have to deal with the messy fruit that it dropped, staining the driveway before being tracked in to create a nasty gelatinous mess in the kitchen. He or she also wouldn’t have to deal with the birds that liked to congregate in the tree, eating the fruit and creating an additional level of mess that prevented anyone from ever parking in the driveway or walking on it during the better part of the year.

Passersby also wouldn’t know about the lovely herringbone brick walkway that was installed by the previous owner, and which the roots of the tree destroyed. They also wouldn’t realize the hazard that the now-uneven walkway caused to anyone who tried to visit in the winter – the destruction of the walkway made it impossible to clear snow or ice.

Initially the neighbors just thought this was a routine trimming, but after large limbs started coming, down it was obvious that this was more than that. I started feeling guilty. After all, it was outwardly a very good-looking tree. I had to remind myself that it was also a species that tends to split in high winds, and due to its size and proximity, if it split (as many trees of the same age in my area already have) it would likely come through the house. That certainly wasn’t anything I wanted.

As the work progressed (thanks to some strapping young men who offered to help) and I looked at all the blossoms littering the yard and the street, I choked back my guilt by remembering that had the tree remained, nearly every one of those would have turned into a piece of messy fruit. I also had to remind myself that the tree was in the way of a pending construction project on the house, which includes revising drainage to ensure that the foundation stays dry and the yard ceases to be a muddy pit.

Working on projects like this always makes me contemplative. This particular project went on for hours, giving me plenty of time to think about what I was doing as well as the parallels to my work life.

Dealing with this tree reminded me of dealing with a particularly difficult employee who ultimately had to leave the organization. From the outside, he appeared to be a solid worker. Gregarious and outgoing, co-workers found him likeable. His outgoing nature often proved to be an issue, however, when he couldn’t complete assignments due to excessive socialization. He needed frequent reminders to stay on task.

Unfortunately, early attempts to correct his behavior resulted in friction with other members of the leadership team who only saw the beautiful tree and discouraged his direct supervisor from formal corrective action. This worker frequently took credit for his colleagues’ work and directly reported these successes to those above his supervisor, putting the supervisor in an awkward spot. Maybe it’s all the time I spent studying human behavior, but aside from his direct supervisor, I felt like I was the only person seeing through his showy exterior.

As time progressed, our little tree dropped his proverbial fruit throughout the department, creating messes that others had to clean up. His roots grew into other departments, resulting in complicated entanglements with female staffers that created additional instability. We pruned and we pruned, but as much as we tried, he grew.

We began to carefully document every action taken because his twisted roots threatened to undermine his supervisor and his peers. Only when his continued presence threatened the future of several key projects could we muster the support to finally remove him.

I felt guilty throughout the process, but like today, had to remind myself of the current dysfunction as well as the potential for future damage and the ways in which he was impeding progress.

Once he was gone, I was pleasantly surprised. Other co-workers grew into the void and supported his replacement, like sheltering trees protecting a young sapling. The team regained its cohesiveness. Some members who had been in his shadow were finally recognized for their achievements.

Like dealing with my former employee, I know that taking down the tree was hard, but it was only the beginning. There’s plenty of work coming – branches to bundle, a stump to remove, French drain to install, and more. Once those things are stable, the new tree (non-fruiting of course) will arrive to be planted and nurtured, ultimately providing shade and beauty. The effort will be worth it and I’m looking forward to the future.

Have a question about arborists, making your own compost, or what’s the best way to store a face cord of wood? E-mail me.