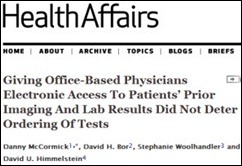 Physicians using computerized patient records are more likely to order new tests, leading to higher healthcare costs. Researchers, whose findings were  published in Health Affairs, found that physicians with point-of-care access to imaging were 40 to 70% more likely to order more tests, compared to doctors relying on paper records. Researchers could not determine the reason for the trend but theorize that doctors on computerized systems order more studies because of the the ease of online entry.

From WallE “Re: HIMSS musings. I think the show would have been better if the floor plan and layout was simpler. After looking at New Orleans floor plan I’m thinking it will be better.They are returning to the single hall with a large “main street” walkway down the middle of the show.” I also prefer the main street, one hall layout, although the argument could be made that there was less walking required with this year’s floor plan.

From CTO “Re: Music.  It was good to ‘see’ you at the sponsor lunch at HIMSS. Since you have the helm this week, how about some insight into your taste in music?  I always like to read about  what Mr. H is interested in.” First let me say that Mr. H and I have very different tastes in music. Mine is a bit eclectic but a short list of my all-time favorite artists include Lyle Lovett, Bonnie Raitt, Aretha Franklin, and Allison Krauss. Some of the more current groups I find fun include Chiddy Bang, Flo Rida, and Bruno Mars.

From Ralphie “Re: Burger, Babes, and Vegas. I thought you might get a chuckle out of what I heard walking back from the HIMSS conference to my hotel behind what looked like two slick make vendor-types.  One turned to the other and said that he had been propositioned by two prostitutes and one of them offered her services for $35. The other one quipped, ‘Wow, that is less than the room service cheeseburger and fries I had last night.’” Love it.

From IDXwatcher “Re: More GE layoffs.  GE Healthcare layoff confirmed March 2nd.” According to an article in the local press, fewer than 30 people (about 2%) were let go last week. GE says the cuts were necessary “to increase competitiveness.”

From Aaron Brrr “Re: Madison Dolly comment on v12 of Epic. Madison Dolly said that v12 of Epic was shown at HIMSS and coming soon. Two questions: what’s in it and when did they change policies about showing that which isn’t available?” Anyone?

From Wondering aloud “Re: Epic. Epic is having a great run like SMS did with INVISION in the 90’s, but their business model is more like MEDITECH’s. Wondering if “in the know” readers think Epic will struggle the same way MEDITECH has recently with 6.0 when Epic attempts its inevitable near term re-platforming as well?”

From HIStalk Fan “Re: Allscripts. A recent analyst report discusses a Q3 restatement involving software transaction, as well as Allscripts’ disclosure of a subpoena in connection with a grand jury investigation and recent litigation involving Medical Services Associates.” Allscripts filed a 10-K last week related to a restatement of a bulk sale and delivery of licenses through a complex structure based on a decision that future performance obligations require the deferral of revenue. The net reduction to operating income was $3.1 million and a $0.01 reduction in EPS. I asked one of HIStalk reader/analysts for his take on the restatement and his opinion was the adjustments were very minor and reflected Allscripts’ conservative approach to revenue recognition. As to the litigation, MSA alleges Allscripts negligently caused the loss of medical billing data, intentionally misrepresented certain facts regarding the computer sold to them, and breached certain aspects of their contract. My take: Allscripts and vendors of their size are regularly hit with similar lawsuits and thus it’s not a cause for alarm.

From Stringer “Re: Medical software sales guy. This guy was convicted today of 1st degree murder of his wife. Very ugly situation, first trial was a hung jury. As you can see he is ALWAYS referred to in the press as a medical software salesman but have never mentioned the company. Thought it might be a good HIStalk expose.” Jason Young was convicted of brutally murdering his pregnant wife five years ago. Young contends he is innocent. I did a bit of digging and could only find one Jason Young in Linked In that could have potentially been a match. If you know the scoop, please share. 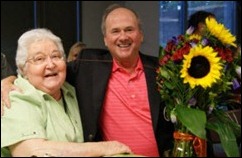 From OldTimer “Re: Allscripts send-off. Allscripts says goodbye to 24-year veteran Vada Hayes. Luminaries in attendance included John McConnell, Eric Sellers, Alan Winchester, Steve Shepherd, Bob Bothwell, and many, many others. There were four cakes: Medic, Misys, Allscripts, and the current color scheme. That’s cakes in green, purple, orange, and lime.” Would have loved to seen the cakes, but here is a shot of the retiring Hayes, along with former Medic/Misys CEO John McConnell.

A few readers mentioned having difficulty getting onto the HIStalk sites today. Of course I can’t find Mr. H’s email from four years ago that explained who to contact if this ever happened. Hopefully Mr. H will check in soon and the issue will be resolved. Thanks for your patience.

Thanks to all the wonderful readers who sent encouraging e-mails about relief from post-HIMSS exhaustion and to remind me a vacation is in my near future.

Healthcare software and service company iMedX completes its acquisition of the medical transcription assets from The Inner Office Ltd.

Iowa Health System contracts with MediRevv for accounts receivable conversion assistance as it transitions its core hospital system to Epic.

The VA selects HP Enterprise Services to continue as a prime contractor for its claims processing program, CAPRI.

The state of Louisiana contracts with CNSI for a 10-year, $185 million project to develop and deploy a new Medicaid claims processing system.

AirStrip Technologies announces the addition of Connie McGee (KPMG) as VP of strategic accounts and the opening of a regional office in the Nashville area.

The Cleveland Clinic expands its EMR to include a visual repository with diagnostic images of patient X-Rays, lab tissue samples, photographs and other images.

All 15 of the independently owned primary care clinics in the Integrity Health Network (MN) transition to EMR.

QuadraMed launches a remote hosting service for its identity management, RCM, and HIM solutions. Cabell Huntington Hospital (WV) is the first hospital to utilize the service. 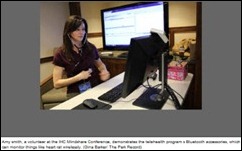 Aetna announces the availability of an enhanced version of its iTriage app, which Aetna acquired in late 2011.

An analysis of eight years worth of Medicare claims data reveals that Hospital Compare, Medicare’s public reporting initiative for hospitals, has had minimal impact on patient mortality. The study found the reporting of quality data led to no reductions in mortality beyond existing trends for heart attack and pneumonia and led to a modest reduction in mortality for heart failure.

The Galveston County HIE (TX) and the HIE of Southeast Texas join the Great Houston Healthconnect, making it the state’s largest HIE market with 133 hospitals and over 14,000 providers. 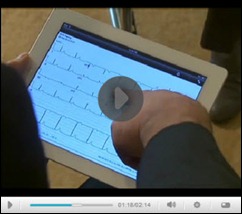 Mayo Clinic rehab nurse Andy McMonigle and three physicians say an iPad helped saved McMonigle’s life when he suffered a heart attack. The nurse, who was exercising in a Mayo Clinic fitness center for employees, felt the onset of the attack and quickly found three doctors in the center. One of the physicians pulled out his iPad and accessed McMonigle’s online medical chart and previous EKGs. Because they had immediate access to his chart, the doctors quickly identified the issue and had  McMonigle transported to the cath lab to remove a blood clot blocking his artery.

Speaking of smartphones, almost half of Americans now own one, making it the most widely adopted type of cellphone device.