It’s Thursday afternoon. I left the exhibit floor a bit early to get my bag and write a few updates before getting on my plane for home. A reader suggested my posts have not been very insightful the last couple of days (sorry) and another suggested they have been too short (sorry.) I’ve been going non-stop, taking plenty of notes, so I will attempt to reclaim my insightfulness over the next couple of days as I share details of my HIMSS experience.

I’d say the most-discussed topic this year was the announcement of the proposed Stage 2 MU rules, followed by the ICD-10 delay. Since the rules were not published until Thursday morning, few people had a handle on what was included. Dr. Mostashari’s overview Wednesday morning didn’t include many details, though apparently some of Thursday’s sessions went deeper. So the first part of the week was all about speculation of what was going to be included, followed by a few “what did you understand was included” type conversations. Of course, many folks also grumbled about the rules not being announced a few weeks ago.

On the ICD-10 front, many were speculating that ICD-10 would be delayed indefinitely and that we’d stick with ICD-9 until transitioning to ICD-11. I pity the vendors who had invested years of development work to facilitate the ICD-9 to 10 transition.

Typically at HIMSS we also hear official or unofficial news of acquisitions or mergers. If there were any such deals this year, they flew under my radar. You did see new booths and refreshed marketing spin from several of the entities that have recently changed their name or rebranded, including Optum, Vitera, and M*Modal.

Speaking of spin, I visited one of the relatively new ambulatory cloud-based EMR vendor whose small space was in the downstairs exhibit hall (or the “dungeon” as one of the downstairs vendors termed it.) I can’t say I saw enough of EMR to form an opinion, but I did smile when the young sales guy explained how the product was developed to adapt to the physician’s workflow. I recall using very similar words when I sold EMR software 10 years ago. Seems to me that if you are marketing a product running on the latest greatest technology and with a sexy interface that you should figure out a fresher pitch.

Rather than sticking with my traditionally more comfortable ambulatory-focused world, I sat through a few demonstration of inpatient products, including Cerner Millennium. The demo featured a high-level look at a new (or coming soon?) version that includes a new chart note entry screen. The most curious part of the demo was the sales guy’s comment that the chart note entry is now laid out more like Epic’s.

Practice Fusion always seemed to have decent traffic and I spent a few minutes asking questions.  The company says it has 150,000 clinical users, of which 40% are physicians, and since rolling out their MU version in September, over 300 EPs have attested. They continue to tweak their ad module, which includes advanced technology to narrowly target the interests of individual physicians and their individual patients and diagnoses.

The Meditech booth was hopping each time I walked by, even though they were not in one of the major thoroughfares.

Allscripts’ booth was the size of a city block, and a busy city block at that. One of the Allscripts execs told me he walked through the downstairs exhibit hall and it brought back memories of not too many years ago when Allscripts had a similar small budget and presence.

A reader e-mailed me this comment: “I am concerned about the industry’s commitment to cleanliness because I can tell you that 70% of the male attendees don’t wash their hands in the restrooms.” I will have to take the reader’s word on that one. 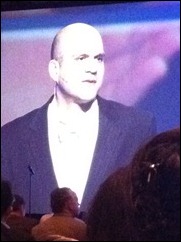 I enjoyed Dr. Mostashari’s Thursday morning keynote. I will start by saying he is a dapper dresser and was wearing a dark pin striped suit, white shirt, and his signature bow tie (yellow.) He also strikes me as a regular, down-to-earth, and smart guy who believes in his organization’s mission. In his talk he highlighted the last few years of EMR adoption, the ONC’s and CMS’s role, and discussed what needs to happen next. One person I asked called Mostashari’s keynote “brilliant.” Another said the whole message could have be summarized with a simple, “Go, team, go!”  I think the content, balanced with the engaging delivery and bow tie, was not necessarily “brilliant” but solid nonetheless.

I had a chance to walk the floor with a physician and later with a CIO. I have to admit I often felt ignored by vendors when I was with them. I realize that the CIO and the doctor are the real prospects but I was a little offended when a couple of vendors barely glanced in my direction. It’s hard to be a diva. 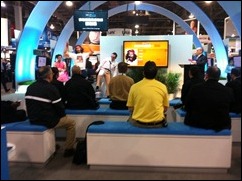 NextGen always comes up with entertaining talent to attract a crowd and this year was no exception. NextGen had  a “spelling bee” that included some odd-ball contestants, including a goofy-looking John McEnroe. It may not have been as captivating as last year’s artists, but still fun. 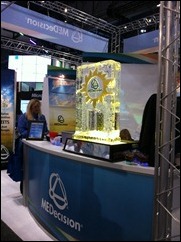 Medecision had a neat ice sculpture and was offering an assortment of unique drinks, from iced coffee in the morning to cocktails in the afternoon.

athenahealth updated its booth a bit and added bamboo and grass here and there. The changes were subtle, but I liked it.

eClinicalWorks never has a huge booth, but always seems to attract a decent crowd.

At 12:30, the line for gelato at Harris’s booth was so long that I am guessing I wasn’t the only one who found it difficult to grab a quick lunch.

Was it me or was there many shades of orange? Optum, Vitera, and Elsevier, to name a few.

dbMotion’s four demo stations and center conference table were full every time I walked by.

Thank you Perceptive for the tee shirt, which appears to be a women’s cut instead of the boring unisex style. 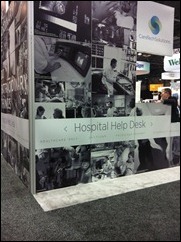 I think my favorite booth was CareTech’s. It was not one of the huge booths and what made it unique was its use of black and white photographs to communicate its vision. So many of the booths are heavy on the bright colors and huge signs, but CareTech’s was simple and not overstated. Well done. 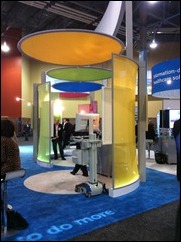 Dell’s booth, on the other hand, was accented in fun colors (pink, yellow, blue, green.) Tastefully done and attractive.

T-System’s booth was decked out to resemble an ER, complete with the “H” hospital sign, wheelchairs, and blood pressure cuffs. Very clever.

Optum’s new booth (orange) was very open and included a theater and conference rooms. I prefer the booths that don’t require you to pass through a front reception area and encourage attendees to walk in and check things out.

3M had a dome-like tent for their demo theater. Different and cool.

MesAssurant had a good-size booth with couches and hardly any booth staff. They had monitors that look like they might have been running PowerPoints, but the PowerPoints weren’t running. I couldn’t figure out if the lack of staff was intentional and they just wanted to offer attendees comfy couches a feel-good space with subtle marketing messages. 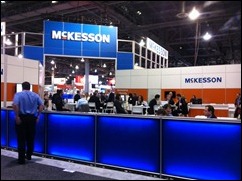 McKesson’s booth was of course big, but not as imposing as it has been in some previous years.

I didn’t see any creepy mimes, body contortionists, gorilla costumes, or black body suits. Maybe I missed them or maybe vendors have retired those gimmicks.

I still have not provided many comments about HIStalkapalooza, which was fantastic from the fashion, to the drinks, to the wonderfully accommodating hosts. Look for that in the next day or two. I didn’t get too much in the way of swag this year, but I have photos of a few of the best goodies.

Happy travels if you are heading home today. If you have already made it home, happy wading through your e-mail inbox. And if you were not able to be in Vegas this year, I hope that between Mr. H, Dr. Jayne, Dr. Travis, and me we have shared enough to make you feel that not everything that happens in Vegas stays there.