You know you had good day when you thought it was about 10 at night, and you check your watch and find that it’s well after 1:00. I’ve never stayed until the end of HIStalkapalooza in years past and yet this time, I found new old friends that I just didn’t want to leave. I’ll probably forget all kinds of stuff since it’s late, but I’ll try to put some thoughts down.

Inga, Dr. Jayne, and I had our HIStalk sponsor lunch today, with a brief in-costume appearance. Our sponsors are magnificent, taking time from their very busy first day of HIMSS to spend time with us. Thanks to Dr. Travis of HIStalk Mobile for managing the event; Duke Hospital CIO Art Glasgow for speaking to our guests;  Tom Visotsky for helping out; and Micky Tripathi for dropping by as one of our favorite people. We appreciate the support of our sponsors and hope the event conveyed that fact to the folks who make all this possible.

HIStalkapalooza was just perfect. ESD did everything right and had a great group of ambassadors on site to welcome our guests. Ross Martin MD did an amazing opening number dressed as Elvis with lyrics customized for HIStalk –  Ross comes through for us every time and he was excellent in every way, from his rhinestone-studded Elvis costume to his great singing and dance moves. We had an Elvis impersonator, something I wasn’t sure I’d like, but he was definitely working the crowd and doing some great Elvis work up there. It was fun having e-Patient Dave there as the subject of one of Ross’s songs, and the duet featuring Ross and Elvis was really good.

The contests were great fun. I’ll let Inga fill in the details later, but the show was skillfully handled by the polished Greg Wilson of Salar and the beautiful Jennifer Lyle of Software Testing Solutions. Our new BFF Timur Tugberk helped out with the activities along with our judges (photos and details to follow). And of course, Jonathan Bush was endlessly entertaining with the HISsies awards – he’s been doing it for us for years and this was his best performance in my mind. I don’t think any description could do it justice.

The IngaTinis were seriously too good – those First bartenders concocted a mixture that was a little sweeter than I like, but prone to disappearing in seconds leaving an empty glass and an inner voice saying, “Don’t have another … these things are liquid crack.” I had two other folks try them and they just moaned their approval.

I didn’t have much to eat, but the prime rib was outstanding, the beer was cold, and the service from the First crew was really good even when it got slightly rowdy.

Thanks to everyone who came, with special recognition to the ladies who were wearing some amazing outfits and shoes and definitely working it. And thanks to ESD, especially Brittanie Begeman, who put unbelievable effort over many months into making this evening special for those present. 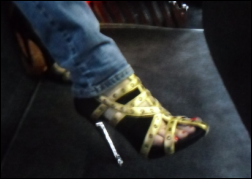 Here’s Inga’s footwear in a pic taken by me in the limo going to the sponsor lunch. She repeatedly emphasized that she had painted her toenails to match her jaunty scarf, while Dr. Jayne and I tried to seem moved by that knowledge. 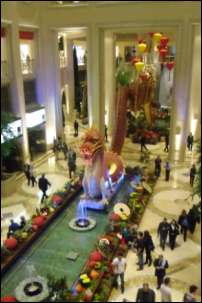 The Palazzo shops area, near First. 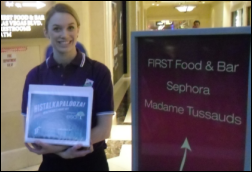 One of the lovely ladies of ESD welcoming our guests. 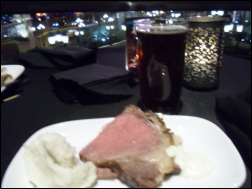 Prime rib, nut brown ale, and a view overlooking the Strip and the Treasure Island fireworks and pirate show. Nice. 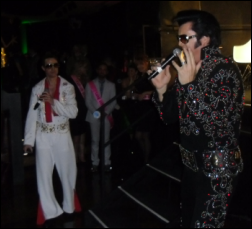 Dueling Elvi, with Ross Martin on the left. They were both good.

Jennifer and Timur with some of our contestants.

Judges on the left, Greg Wilson on the right, contestants in the middle. 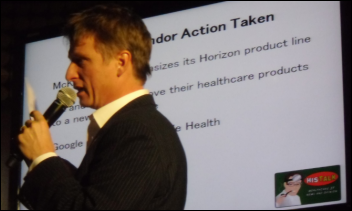 The incomparable JB doing the HISsies.

Epic won a lot of the “good” HISsies awards. Thanks to Judy Faulkner for dropping by.

I’m sure we’ll have more, but it’s now 2:00 in the morning and I’m tired, so here’s a quick rundown of the exhibit hall.

I’m meeting my BFF Dr. Jayne for a pre-HIStalkapalooza cocktail, so I don’t have much time to do more than highlight the last day in pictures. 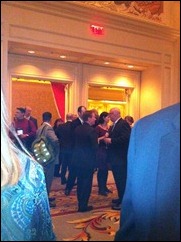 Dr. Jayne and Mr. H let me take their picture with HIIMSS President Steve Lieber (he’s the one in the middle.)

Elvis was alive and kicking last night at the opening session. 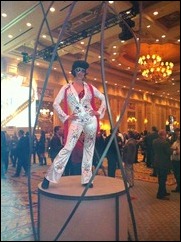 The only missing from this dancing Elvis was a pole. 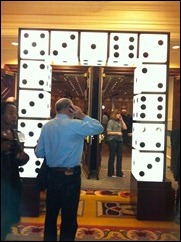 This gentleman was calling home to tell his kids about the amazing giant dice decorations. 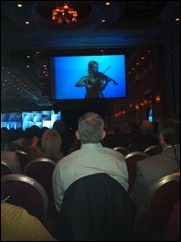 Opening keynote this morning was Twitter founder Biz Stone. But, not until 35 minutes of music, dancing and a rather dry welcome from a HIMSS board member (I missed her name.) Stone was smart and funny. I only Tweeted a couple times during his talk. 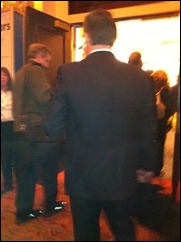 I was one of the ones crushing my way to the front of the line to get in the exhibit hall the moment the doors opened. 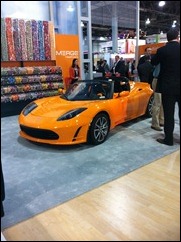 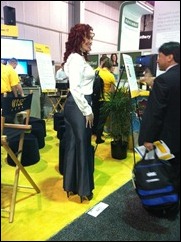 I think she was a professional booth babe but wow – really tall and in really high heeled shoes. 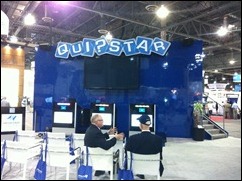 I will be playing Quipstar at Medicomp’s booth tomorrow at 4:00 pm.  Come see me. 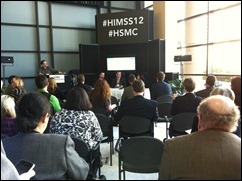 Bloggers meet-up. Dr. Travis is participating in one of these sessions at some point but Mr. H, Dr. Jayne, and I weren’t asked to participate. 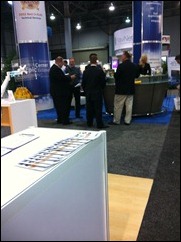 Orchestrate was just one of the HIStalk sponsors promoting the HIStalk Booth Crawl with a sign. Thank you! 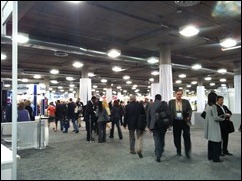 Hall G is downstairs and easy to miss but that is where you will find the Interoperability Showcase and a number of other special booths. The ceilings are definitely lower than in the upstairs hall and it feels a bit dungeon-like.  However, there were still plenty of people. 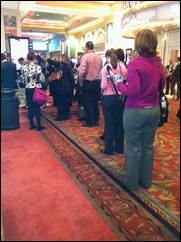 The longest line: Cafe Presse, where the caffeine-addicted stood in line for 15 minutes to get their fix.

HIMSS opening day – we wait for it each year, and it dawns pretty much the same as any other day, except this year it’s a day later. I was pleased to see the turnout at the opening reception Monday night – it seemed like a lot more people than last year and most of them were having a good time. Mr. H and Inga and I had a nice visit – after all, we only see each other once a year, so there’s a lot of catching up to do. I did feel a bit conspicuous standing there with the three of us just hanging out, but that’s the magic of being anonymous. 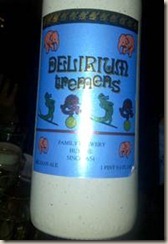 HIMSS always seems like a whirlwind, and it’s no different this year. What’s been different this year (so far) is meeting actual family physicians out in the wild – yes, they do exist at HIMSS. And I’m happy to report they were pretty fun, even introducing me to some kicky Belgian ale. You do have to love a beverage that has pink elephants on the label (and that was also served in accompanying pink elephant glasses.) Don’t get me wrong, they also ordered milk and Cookies, revealing their Midwestern roots.

What do informaticians do when they get together? Make fun of ICD-10. In honor of my collision with Judy Faulkner on Monday, one whipped out his homegrown iPhone app and coded my visit: W51: Striking against or bumped into by another person – unintentional. It was actually a pretty cool app, with twirling dials (think slot machine) that allows you to shake your phone and select codes a la Urbanspoon’s mobile app. Based on the wackiness of ICD-10, I may be better off using the app than actually trying to select codes rationally.

Your HIStalk crew got together again (this time, craftily disguised in our white coats) today for the HIStalk vendor. appreciation lunch. Since almost anything goes in Las Vegas, we didn’t get many odd looks as we swept into Fashion Show Mall. It’s great to see everyone together and we do really appreciate the support that makes it possible for us to do our HIStalk thing.

Tonight was HIStalkapalooza of course and a good time was had by all with Jonathan Bush delivering a stellar performance and many hot shoes to be seen. One winner was asked in the hotel elevator if she was Miss America, what with the beauty queen sash and all. A little disappointed that I did not see my secret crush Farzad, although several other Dr. Jayne crushes were in the house, including Evan in his polka-dot jacket.

More to come tomorrow after I get my beauty rest. These Louboutins are killing me.