From You Know Who: “Re: RelayHealth. Jim Bodenbender out, announced abruptly on phone call. Jeff Felton, who ran the RelayHealth Pharmacy group and was a transplant from McKesson San Francisco, is taking over the entire division.” That appears to be true from the company’s management team page, on which Jeff Felton (above) is now listed as president. 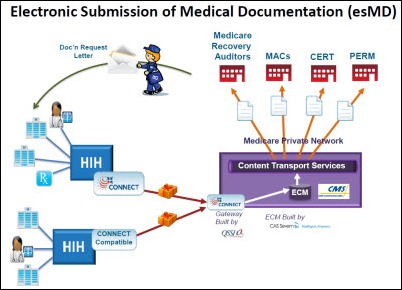 From RAC Frustration: “Re: electronic RAC responses. I see that Medical Electronic Attachment (MEA) has become the latest company to be certified by CMS. I am curious how many HIStalk readers will use the esMD (electronic submission of medical documentation) for RAC and MAC responses?” MEA’s progam uses an NHIN gateway to send electronic responses to CMS’s post-payment audit requests of several flavors (RAC, MAC, CERT, PERM, and ZPIC.) I’m interested in how much transaction volume the average hospital will experience to keep CMS happy once esMD Phase 2 goes live in October and all documentation requests will be sent electronically. Comments welcome.

Surely the calendar is playing a cruel joke: it can’t be just three weeks until the HIMSS conference, can it?

My Time Capsule editorial this week from five years ago: Want Physicians to Use Systems? Standardize Screens Like You Do Back-End Databases. A free sample: “Hospitals never seem to get how illogical it is to physicians that every hospital buys a different system, but expects community-based doctors who cruise in for an hour a day to master all of them without burning up more hours of their self-employed day. They seem puzzled when doctors jeer at their zealous requests to bone up on Cerner when he or she is fuming at Eclipsys across town and McKesson at the university hospital.”

Listening: reader-recommend James, which I would characterize as jangly Britpop with strong vocals. They (it’s a band,  not a guy) remind me of the Smiths. They aren’t totally obscure, having sold 25 million albums in their 30 years. They probably would sell more if they had a more search engine friendly name, although come to think of it, that’s another similarity between them and the Smiths.

A lot of money and effort is spent putting on the exhibit and educational tracks of HIMSS, but that’s just to provide the backdrop for the real reason people attend: to connect with folks for business and pleasure, two-thirds of respondents said. New poll to your right, as suggested by a reader: what reaction do you have when you hear that a vendor uses offshore programming resources?

Thanks to CSI Healthcare IT, supporting HIStalk as a Platinum Sponsor. The company is a leading national provider of IT and training professionals, both contract and permanent. The company’s team of 75 recruiters can often find local qualified resources, minimizing billable travel expenses to the client. Its pricing model has saved health system customers such as Sutter, Baylor, Texas Health, Clarian, and Sentara up to 60%. The company is vendor neutral, providing resources for projects involving McKesson, GE Healthcare, Allscripts, Epic, Cerner, Meditech, NextGen, and others. It can handle work ranging from providing a single resource to managing the projects of large health systems, also offering a specific package called Epic Community Connect that helps health systems provide Epic’s ambulatory systems to community practices (marketing, contracting, readiness assessments, implementation, and support.) Thanks to CSI Healthcare IT for supporting HIStalk.

Federal CTO Aneesh Chopra resigns and is expected to run for lieutenant governor of Virginia. You aren’t surprised if you read HIStalk on January 13, when my non-anonymous, well-placed informant chose the fantastic phony name of DeepThrowIT to tell us that Chopra was heading out. I think that might have been my first non-healthcare IT big scoop rumor. 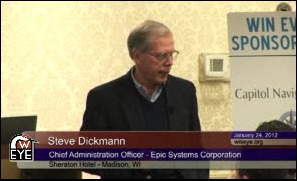 I recently quoted some Epic facts provided by Chief Administration Officer Steve Dickmann in a recent talk he gave to a Madison group. The full video is here, from which I pulled a few more:

Supporting HIStalk as a Platinum Sponsor is Versus, which offers real-time location systems for patients, staff, and equipment. Hospitals use that information to automate workflow, improve efficiency, increase patient safety, boost patient satisfaction, and increase revenue. The company provides interesting examples: (a) advancing patients to the next level of care based on events, such as completed labs or EKGs; (b) locating telemetry patients in distress wherever they are; (c) alerting the physician when patients are ready to be seen; (d) reminding staff to wash hands; and (e) alerting housekeeping to clean the room when the patient’s badge is dropped into the discharge bin. The Traverse City, MI company has been around for over 20 years, with its combined infrared/radio frequency system being endorsed by the American Hospital Association. Hospital customers have documented improvements such as cutting equipment losses from $1.5 million to $40,000 year, eliminating the need for clinic waiting rooms, reducing telephone calls by 75%, and increasing bed capacity by 25% with no construction. Interesting stats: the company has over 600 facilities using 500,000 of its components to track more than 1 million patients per year. The big announcement a few weeks back was that The Johns Hopkins Hospital chose Versus to manage staff and assets in real time for some locations after a three-year pilot of several RTLS systems, with additional deployments scheduled. Thanks to Versus for supporting HIStalk.

The Peace Corps has an RFI out for an EMR product, just in case you’d like to sell them one. They’re actually looking to have OpenEMR customized, along with Microsoft Dynamics 2011 and BizTalk for reporting.

In England, Homerton University Hospital allows its original NPfIT contract for Cerner and BT expire and signs its own seven-year extension directly with Cerner, declining to open the opportunity to other vendors because of its working relationship with the company. 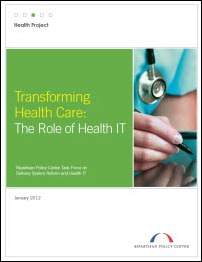 The Bipartisan Policy Center releases its recommendations for using healthcare IT to improve care and reduce costs. Quite a few industry names served on the task force and provided their input. Some of its observations and recommendations: 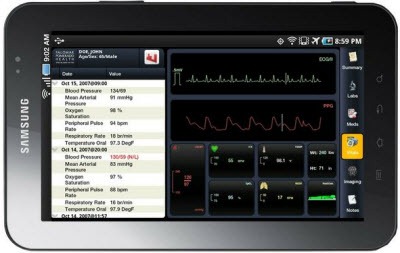 I’ve previously mentioned the MIAA EHR mobile viewer app developed by a three-person Palomar Pomerado Health development team for its own use with its Cerner systems. A preview at a Toronto mobile healthcare conference generates interest, with the app going to pilot in March. The hospital hopes to commercialize it. Said a Canadian hospital IT director at the conference, “We need to look seriously at how a publicly-funded hospital in the States has been able to advance their technology like this when we seem to stumble on things like policy and rules.”

The Pennsylvania Health Department finds that nurses at St. Luke’s Hospital overdosed three patients in the past two years by incorrectly programming their PCA pumps. Hospital employees said the hospital did not require training on the devices.

An article covering successful businesses that did not use outside financing provides an example in eClinicalWorks CEO and co-founder Girish Kumar Navani, quoting him:

I don’t foresee leaving the company for at least 10 years. I would like to leave it a private company with no external investors and absolutely no thoughts whatsoever about Wall Street. I am having fun and take great pride in my freedom. There is no reason I would give that up. We are a cash flow positive company. We have recurring revenues and no debt. We have a large customer base that is growing exponentially.

Compuware says it will take its Covisint subsidiary public in its next fiscal year, which starts in April. Covisint, which has $74 million in annual revenue, offers an exchange platform that connects hospitals and practices, including services for identity management, collaboration, master patient index, and record location.

A column in The Atlantic revisits a 1995 article it published about Newt Gingrich, saying that some of his goofy, overly dramatic “we are at a crossroads” ideas (like colonizing the moon) prove that he can’t separate something that sounds cool if given little thought from pushing the government into spending huge amounts of money just to find out how cool it is or isn’t, even though the free market is better equipped to make that call. Healthcare technology was mentioned in that 1995 article:

Gingrich also thinks health care technology is cool. Serious students of this subject worry that insurance insulates patients from the cost of technology, thus yielding lots of high-cost, low-benefit use and in turn steering too much of society’s resources to the further development of such machinery. But Gingrich wants more. In 1984 he wanted more cat-scan machines, and he wanted the government to provide a $100 million incentive for the development of user-friendly dialysis machines–even though "there are already companies and researchers interested in this problem." The point here isn’t that Gingrich will now waste tons on technology. The current political climate will restrain this tendency. The point is that–in case you hadn’t noticed–there is little careful thought underpinning his enthusiasms, nothing solid beneath his unshakable self-assurance and his intense disdain for disagreement.