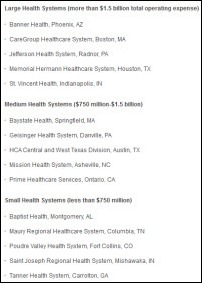 Thomson Reuters names its Top 15 Health Systems that have achieved superior clinical outcomes based on quality, patient perception of care, and efficiency. If anyone knows how many are Epic, that would be interesting given all the lofty ambitions expressed by customers trying to justify their expensive projects. Or for that matter, how many are HIMSS EMRAM Stage 6/7 since HIT cheerleaders are always trying to make the connection between HIT and outcomes.

From Barefoot in Vegas: “Re: Trade show shoes. AMAZING TOPIC!!!!!!! Please send me your show list.” I love people who don’t chinch on exclamation points, so I was happy to share my shoe brand tip with Barefoot. I admit I was amazed (!!!) how many people were interested in my footwear insights. It made me feel a little like Oprah. 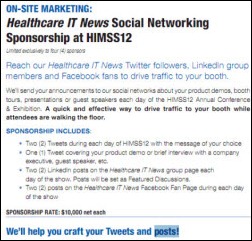 From Social Profiteer: “Re: pimping HIT tweets. Apparently so-called news organizations, especially those owned by HIMSS, are willing to sell out their readers.“ I can’t decide which is more interesting: (a) charging vendors $10,000 for a couple of tweets,  or (b) vendors thinking that barraging a news site’s readers with unwanted Twittermercials is actually hip, progressive marketing that will benefit those companies. It seems kind of unsavory and reader-insulting for a company with “news” in its name to be doing this kind of revenue augmentation without regard to the potential damage to whatever reputation it has, but it’s really none of my business – that’s between the publication and its readers. 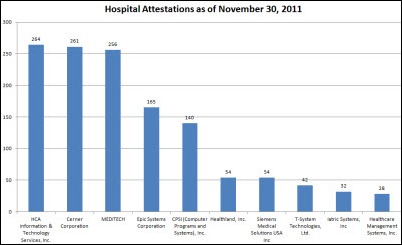 From Harcourt: “Re: inpatient MU attestation. Please post this graph. I believe the huge gap between Cerner, Meditech (including its contribution of HCA’s attestation), and Epic would create interesting discussion.” The graph is here. As with EP attestation numbers, I would be cautious about trying to apply client MU figures to the likelihood of a given customer earning MU money. Meditech has more live hospitals than anyone, so I’d expect its numbers to beat those of other vendors. In fact, I’m slightly surprised that it doesn’t have a wider lead over Cerner and especially Epic (Epic’s number suggests that 50% of the hospitals it has ever sold to have attested, which I would think trounces both Cerner and Meditech if you’re calculating odds). I can’t say I’m really interested in any of this information, since any vendor with even one successfully attesting client has proven that its software has the capabilities needed. Beyond that, much of the required effort belongs to the customer.

From HITEsq: “Re: Girard Medical Center (KS). Really doesn’t like Cerner – suing them for breach of contract. Among the interesting tidbits, Cerner staff apparently though that Cerner was able to get the hospital to agree to an agreement as a result of ‘concert tickets and booze’ and that the Cerner staff was only there ‘because [they] drew the short straw.’ Apparently, Girard feels like it paid $1.3M for nothing.” The 21-bed hospital says it has paid $1.3 million of the $2.9 million total without receiving “any tangible work product” and that the time and attendance system that it thought it was getting wasn’t included (they claim Cerner helpfully suggested using an Excel worksheet instead.) The hospital also claims that Cerner assigned “incompetent staff” to implement the system. That’s all fun to read, but (a) this is one side of an argument that has two; and (b) some of the claims fall between irrelevant and desperate. There’s a good lesson here for customers: don’t let your buddy-buddy salesperson talk you out of getting an expert in contract law to insert protection into the agreement that covers whatever you are (or should be) afraid of as a customer. Once it gets to the lawsuit stage, there’s a good chance that nobody will be happy with the result except the hourly-billing lawyers.

Listening: reader-recommended Turisas, epic pagan battle metal from Finland, like a band of Vikings hit Kerry Livgren over the head with a mace in 1975 and took over prog band Kansas, then merged it with Green Carnation and Muse. While I acknowledge that most folks won’t like it, I definitely do.

I’m really behind after taking some time off, just in case I seem unresponsive. I don’t think that situation will change until well into the weekend since I’ll be working all of it. 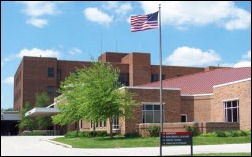 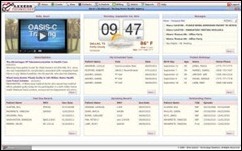 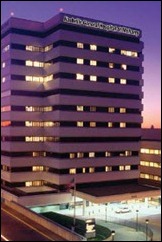 The Premier Healthcare Alliance awards a contract to UltraLinq Healthcare Solutions for its Web-based imaging system.

Chris Caramanico joins SCI Solutions as SVP of marketing and business integration. He was previously SVP of new business enterprise applications for Allscripts.

A data entry error creates grossly inflated bills for hundreds of Bronx-Lebanon Hospital (NY) patients. The hospital blames its billing company for inserting invoice numbers in the space designated for the amount owed.

The local paper profiles Beacom Health, one of six practices that have taken advantage of subsidies from Fremont Area Medical Center to implement eClinicalWorks. 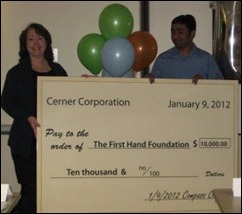 Cerner donates $10,000 to its First Hand Foundation to celebrate hitting the 10,000-employee milestone. The company has now employs 10,062 associates, including 6,575 in the Kansas City area.

I couldn’t help think of Mr. H when I read this since I know he enjoys both his music and his exercise. Between 2010 and 2011, 47 people were killed or seriously injured while walking and wearing ear buds or headphones. I predict a few lawsuits against Apple for allowing the music to play so loud.

Weird News Andy says he’s excited at the news that a pill may replace the need to exercise, but he’d be happy with one that helps him remember where he put his car keys.

Strange: unknown criminals steal a computer and paper records from a South Carolina doctor’s office, then drill a hold in the roof, insert a garden hose, and turn it on to run all weekend. 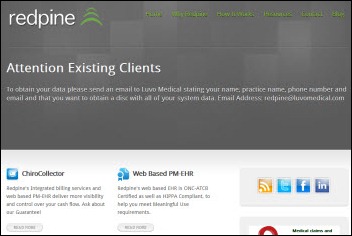 Commissioners of Bay County, FL discuss a settlement with chiropractic office management software vendor Redpine, which relocated to the area to take advantage of $750K in incentives and then closed its doors. The company has offered to sell its software rights to repay the incentives and claims it has several prospective buyers.