From California Girl: “Re: CareFusion. Has done some executive trimming of late and more layoffs may be in the offing.” Unverified.

From Lucitania: “Re: Gerry McCarthy of McKesson. Confirming that he’s leaving for HealthMEDX to work with Pam Pure again. The internal announcement didn’t give his new role.”

From RS: “Re: Kathleen Sebelius. Op-ed in The Washington Post this evening.” One might quibble with her assessment that the Affordable Care Act is “putting consumers back in charge” by (a) requiring insurance companies to provide an explanation when they increase premiums by 10% or more, and (b) also requiring them to spend 80% of premiums on health care services, which of course still lets them make their big money by investing prepaid premiums until services are actually rendered, which allows them to put their signs on tall buildings and to sponsor sporting events. The problem with reducing healthcare costs is that it would require (a) patients who are conscientious about their consumption of healthcare dollars paid by someone else, which hasn’t worked well historically; and (b) politicians with non-partisan political backbone who are willing to rile big organizations that are loaded with lobbyists and campaign donations, which never happens. And in the way of counterpoint, here’s a comment left on the article:

Tired talking points. Where do I start? Funding was shifted from the Medicare program and the doctor SGR fix was intentionally omitted to make this law "bend the cost curve down", but ACA does nothing to lower costs. Savings were based on finding fraud and abuse, which could have been done in the current system. The rising costs of premiums cited by Sebelius are going to insurance companies who squirrel it away in profits hidden as loss reserves. Any increases in payments for the last 9 years to doctors and hospitals have been lower than the same inflation rate. Her state-based "competition" is dependent on states participating. The "80-20" rule doesn’t apply to AARP plans in exchange for their support. For AARP it is really a 65-30. Lastly if it is so great, why has the administration granted so many waivers to unions and large contributors?

From Niles Crane: “Re: Meaningful Use vendor percentages. As a vendor, I can say that most clients don’t see any reason to tell their vendor that they’ve received a check unless asked. We’ve also seen odd things happen when clients who applied: one had her money claimed by her previous employer, another submitted data that triggered a state Medicaid audit, and a startup practice found they had been claimed by a former employer and nobody knows how to handle partial years. What I really can’t understand, though, is why those who qualify haven’t applied.” 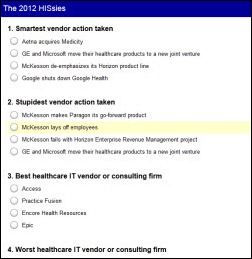 It’s HISsies voting time. I’ve placed the most-nominated entries on the final ballot, which I’ll e-mail out Monday evening. I won’t send an e-mail reminder (since I always get a few complaints about wasting 0.5 seconds of someone’s time to read and ignore the e-mail subject line vs. the five minutes it takes to complain about it), so watch your inbox and check your spam filter if you don’t receive yours. Voting is limited to subscribers to the e-mail update as of this past Saturday morning when I had time to create the ballot e-mail list.

Vince’s HIS-tory this week goes micro – it’s all about the early days of PCs in hospitals. Quite interesting as always, and fun to read of the one example where Apple took a hospital beat-down from the old-guard IBM.

Listening: Veruca Salt, mid-90s, unpolished hard-charging chick rock. And while Mrs. HIStalk and I were having lunch today at the local hipster taqueria, I bet I was the only person there who could identify the music playing over the sound sytem – Portishead’s “Glory Box.” Mrs. H applied minimal effort in pretending to be impressed.

Around two-thirds of readers aren’t buying it when a hospital’s post-mortem on computer downtime claims that patients weren’t harmed as a result. New poll to your right: are business conditions better now than a year ago?

Welcome to HEI Consulting, a new Platinum Sponsor of HIStalk. The KCMO-based company provides expertise all over the world in everything related to Cerner Millennium on both the clinical and revenue cycle sides of the house, including assessments, selection, implementation, workflow analysis, revenue cycle, EDI, CCL scripting, Cerner Open Engine integration, data extraction, and optimization. They offer experienced analysts who have been involved with Millennium implementations worldwide, including in the UK, Middle East, Canada, and of course the US. If you need help with Meaningful use, workflow optimization, ICD-10, give them a call. Thanks to HEI Consulting for supporting HIStalk.

My Time Capsule editorial from five years ago: Happy 2007 – Now Get Back to Work! An extract: “Hospitals, too, get busy after months of letting IT projects lie fallow. No wonder ROI is hard to come by — projects come to a screeching halt because of non-IT staff refusal to get involved during (a) the November to January holiday block; (b) summer vacations; (c) school spring breaks; (d) impending JCAHO or state inspection visits; and (e) local, state, or national conferences involving anyone remotely involved in projects. No wonder implementations take forever – they’re on hiatus half the year. ”

The perennial underperforming and unimpressive Yahoo pays $26 million to secure the services of its new CEO for one year, although that’s a pay cut from that of the previous CEO, who made $47 million in one year before being fired over the telephone. I like Yahoo Finance and I use their e-mail because I like it better than Gmail, but otherwise I couldn’t tell you anything they offer and I don’t really want to know.

CMS takes a bold step to curb high levels of Medicare fraud in 11 states (FL, CA, MI, TX, NY, LA, IL, PA, OH, NC, MO) in allowing RACs to review claims before providers are paid instead of the “pay and chase” standard of pay first-ask later. Orthopedics specialists, as you might expect, aren’t thrilled at that policy, suggesting also that CMS should spend some effort cutting back on direct-to-consumer advertising for free motor scooters and sleep apnea machines, which it says only two countries (the US and New Zealand) allow. 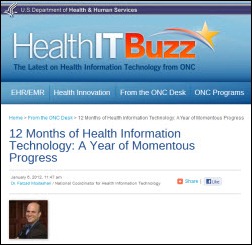 National Coordinator Farzad Mostashari lists ONC’s accomplishments for 2011 and invites comments on the biggest health IT trends for 2012. On his list:

Rural doctors in Australia, eligible for $6,000 each in telehealth grants but offered minimal assistance and incompatible software modules, are often just giving up and using Skype instead. According to the president of the rural physician’s association, “In many cases, it works much better than some of the more sophisticated things out there. There is a whole range of technologies and, in establishing video-conferencing, [doctors] are not going to go out and buy some extravaganza of a system, they are going to stick with the simple stuff. Inevitably, there will be shonky players coming into something like this. Doctors have concerns about people putting together hardware and software and calling it a video-conferencing solution.”