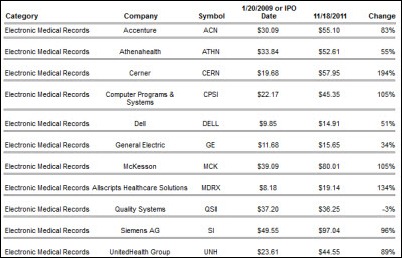 A USA Today article examines the effect of stimulus money on publicly traded companies, with those in healthcare IT being “the clearest connection between the stimulus and the economy.” I don’t get this statement: it says Cerner clients have earned $100 million in stimulus money and Cerner has 20% market share, so it concludes that industry sales must have been boosted by $500 million per year, when (a) stimulus payments to providers have nothing to do with vendor sales; (b) even if they did, it wouldn’t be an annual increase; and (c) the number is probably much larger than $500 million a year, given that Epic alone has probably exceeded that number even just on the software and services part of its contracts. The article mentions sales increases for Allscripts and athenahealth, although Jonathan Bush of athenahealth opined that his company is “… a beneficiary of stimulus spending, but we’d be doing even better without it. What you really needed was hundreds of cloud-based companies innovating.”

From A Muse: “Re: weighty issue. Does anyone else feel a bit uncomfortable when we have industry thought leaders, spokespeople, and senior management of do-good healthcare companies or organizations who are overweight? When I see obese people in organizations advancing remote patient monitoring or other disease management, it makes me think, ‘Yep, it’s working for you, partner.” 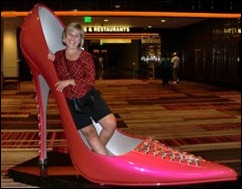 From Teena Martini: “Re: picture perfect. I saw the shoe when I was in Las Vegas and crawled into it. And I am a Martini!’” All Inga BFFs beware: there is some stiff new competition from Teena Martini (that’s her real name!) Teena, who is director of clinical applications at Gwinnett Medical Center in Georgia, sent me her photo after I mentioned a desire to crawl in this exact shoe with an Inga-Tini in hand. During HIMSS, I am dragging Dr. Jayne with me to the Cosmo for a serious photo shoot.

From EMRsehole: “Re: [vendor name omitted.] The acting head of HR whacked numerous sales reps and others have had to sign an airtight non-compete.” Unverified.

From Mack Chiavelli: “Re: Newt Gingrich. All true. My former healthcare IT company, now dead and therefore nameless, ‘donated’ much, much money for Newt’s influence to drive interoperability and open systems in government circles. We even sponsored a number of his speeches to pre-HIMSS CHIME annual Fall Forums and later to CHIME members when the organization capitulated to HIMSS. I don’t know how successful we were, but Newt certainly made out well.”

From Insider: “Re: Epic moving into Meditech territory at Poudre Valley. It’s true that PVHS is getting rid of Meditech 6.0 and putting in Epic. Meditech’s 6.0 performance was just too painful and their response was not enough to keep the business.”

From PigEarstoPurses: “Re: 3M. I received this e-mail today about a 3M interface policy change. Wondering if others got it? It true, I would hope customers tell them to take a hike since it’s none of 3M’s business where and how customer data is utilized.” A letter from OptumInsight to its own customers says that a new 3M policy requires customers to submit an inventory of anything that interfaces with 3M’s applications. It also requires vendors of those systems to license their interface with 3M because its intellectual property is at risk. The letter claims 3M says it will disable any interfaces that aren’t covered by licenses by July 2012. Readers have sent rumors about 3M supposedly not allowing their encoder product to interface with non-3M speech recognition applications, so that may or may not be related. 3M is welcome to provide a response since this is just one side of the story. 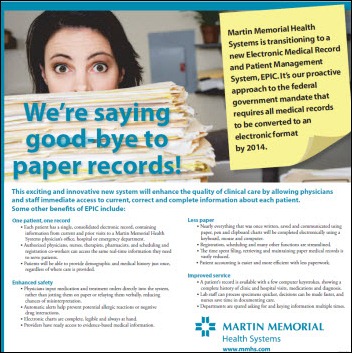 From Ed Collins: “Re: Martin Memorial Health Systems, Florida. I’m an avid reader and find HIStalk to be a valuable tool in my CIO arsenal. Here is a bit of news that your readers might enjoy. MMHS will be going live with Epic inpatient and ambulatory apps at our two hospitals, our freestanding emergency department, and nearly half of our medical group (45 PCPs) on December 1. The specialists who represent the remaining half of our medical group go live in March. The local ad campaign started over the weekend. Nine days and counting to go-live!” I asked Ed (he’s the VP/CIO of MMHS) if he got tired of shuttling people to Verona for the never-ending Epic training, but he observes that the product just works, so the training focuses on user and analyst knowledge of the system. I swapped e-mails with another CIO earlier this week and we reached that same conclusion: you begrudge the huge time and money investment for Epic’s upfront training that seems like overkill, but only until the day you go live and everybody’s ready (extensive training, documentation, and proficiency testing is part of Epic’s secret sauce that competitors rarely emulate.) Above is MMHS’s ad in the local paper explaining the transition. I know from a long-ago site visit I took there that MMHS’s outgoing system is Meditech, so this is yet another instance of a previously unthinkable but now increasingly common phenomenon. Thanks to Ed for the report – I always enjoy hearing from the front lines. 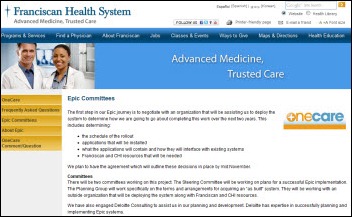 From THB: “Re: Franciscan Health System (WA). Going Epic.” According to its project page, Franciscan brought in Deloitte for planning (seems like Deloitte gets a ton of that business) and will name a consulting firm to help with the implementation any day now.

From The Fixxer: “Re: UPMC’s altered EMR lawsuit. I am amazed that electronic medical records are being used to tamper with evidence. Why would an old geezer retired surgeon want to learn how to enter a finding in an EMR? The hospital has training facilities and Cerner experts to teach him. The bigger story is who advised him to do this. Might there just be a Penn State like scandal involving the attempted cover up of deaths of adults?” A judge orders UPMC to allow its head of quality assurance to be deposed to explain why he changed the electronic medical record of a patient who had died three days earlier in the hospital. UPMC’s lawyer in the malpractice lawsuit against it argued that the QA director was doing routine peer review work, but the plaintiff’s attorney says he not only changed the record after the fact, but also asked another doctor to add documentation about how the patient died. 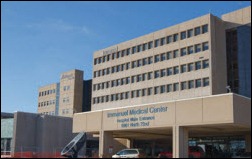 From Nikita: “Re: Alegent in Omaha. They have also begun the popular to journey to Epic, starting from Siemens in their case. The board is planning a final act on the subject in March 2012, with a stated 4-5 year migration period. Part of the support argument references Epic’s being ‘a single system.’” Unverified. Alegent and Siemens have been ultra-chummy for years. If the rumor is true, Soarian gets the boot. 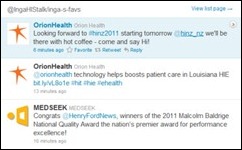 I don’t know about you, but I’m particularly thankful for the Thanksgiving break because I’m tired. I will most likely not post again until the Monday Morning Update (unless I can’t resist), so we will reconvene here then. If you are traveling, spending time with friends and family, or just slouching in front of football on the TV while dribbling gelatinous globs of cylindrical canned cranberry sauce down your front, I hope you have a wonderful holiday reflecting on those things for which you are thankful. 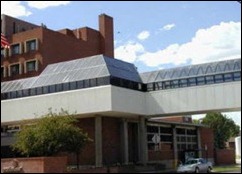 In advance of its migration to the Meditech 6.0 platform, Parkview Medical Center (CO) expands its agreement with Summit Healthcare to include Summit Express Connect.

Children’s Mercy Hospital & Clinics (MO) chooses Accelarad’s SeeMyRadiology for image sharing. The company says its growth in the past 12 months makes its platform “effectively a Health Information Exchange for imaging in the region.”

SCI Solutions convenes its charter Executive Advisory Board to advise the company on solution development and the acceleration of the company’s growth. Some of the familiar names on it: Dave Garets (The Advisory Board Company), Ivo Nelson (Encore Health Resources), Jay Toole (Dearborn Advisors), and Allana Cummings (Northeast Georgia Health System.)

St. Vincent Healthcare (MT) replaces its GE Centricity EHR with a $4 million system from Epic. It’s part of Sisters of Charity of Leavenworth, which is moving all facilities to Epic.

Aetna and the Center for Biomedical Informatics at Harvard Medical School will partner to apply bioinformatics data analysis techniques to aggregated clinical databases, hoping to evaluate treatment alternatives for outcomes and cost, study patient compliance in chronic disease, and evaluate the potential of combined EHR and claims data to predict disease. The project will be co-directed by Zak Kohane MD, PhD of Harvard and Brian Kelly MD of Aetna (above.)

A 46-year-old former physician is arrested for practicing medicine without a license out of her home and for committing a series of burglaries that include the theft of landscaping lights, decorative patio chairs, and bicycles. She has also been charged with selling phony lottery tickets. Lisa Marie Cannon was a licensed pulmonologist until she failed to renew her license in June. The local police chief calls the case “very bizarre.”

The Joint Commission issues a statement saying it is “not acceptable for physicians or licensed independent practitioners to text orders for patients to the hospital or other healthcare setting.” It notes that texting does not provide the ability to verify the sender and  it can’t store the original message for validation.

EHR adoption for midsize and large ambulatory practices will exceed 80% by 2016, according to IDC Health Insights. IDC provides an assessment of 10 EHR products from eight vendors, based on their current successes and predicted performance over the next three years. eClinicalWorks earns the top score, followed by Cerner, Sage, and NextGen.

Weird News Andy calls this article “Abs of steel, butts of steal.” Florida police officers arrest a transgender woman for practicing medicine without a license after complaints that her derriere-enhancing procedures involved injecting patients with toxic substances such as Super Glue and Fix-a-Flat. WNA also tracks international news as evidenced by this story, in which a German gynecologist is arrested for taking photos of his patients during their exams without their permission, with the evidence search yielding 35,000 nude pictures. And WNA likes the development of a talking plate in England that commands diners to stop bolting their food down, although he’s hoping that the 1,500 pound plate refers to British currency rather than weight. 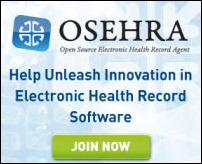 A couple of items sent over by Roger Maduro of Open Health News from the just-ended VISTAExpo & Symposium in Redmond, WA. Oroville Hospital (CA) goes live on VistA without using outside consultants after spending $500K of its own money to enhance the VA’s product to meet its needs, tapping into the developer community to create its own modules and interfaces. The total project cost was $10 million, which includes all hardware, replacement lab and medical equipment that could interface to VistA, and iPads. Roger also notes that VA CIO Roger Baker made a surprising announcement in embracing newly named VistA custodial agent OSEHRA (Open Source Electronic Health Record Agent), saying the VA will use the OSEHRA product as its own and will contribute development to it.

I got Vince’s HIS-tory (HIS Inc., Part 2) a bit late for Saturday, so here it is, including naming “the most pathetic name in the HIS industry.” I really like this week’s instructional guide on “How to Sell Vision-Ware,” which I found to be deadly accurate. Another excellent installment from HIT’s de facto historian.