From The PACS Designer: “Re: iPad. A new, free iPad application called Line2 HD turns your iPad into a phone. This extended feature could increase the penetration of iPads into healthcare environments.” It’s very cool, but it should be noted that while the app is free and so is the service for a seven-day trial, the ongoing cost is $10-15 per month depending on the options chosen. That gets you a new or transferred number, voice mail, and conference calling, all over Wi-Fi or cell. A cool feature: if you’re not connected, it will forward incoming calls to up to six other numbers. This CNET review is positive. 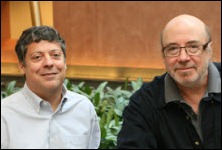 From Lobstah: “Re: Meditech. New executives.” Meditech promotes Chris Anschuetz to SVP of technology and Scott Radner to VP of advanced technology. They’ve been with the company for 36 and 21 years, respectively.

From Ralph Hinckley: “Re: NextGen. Drops MEDSEEK as a white-label enterprise portal, developing its own.” Unverified. Ralph sent over an e-mail saying that NextGen will release its own enterprise patient portal in 2012, integrated with its HIE platform and physician portal. The companies signed their agreement just three months ago.

Speaking of Meditech, the company releases its Q3 report. Revenue was up 19% to $141 million, EPS was unchanged with profit of $32 million for the quarter.

My Time Capsule editorial this week, gasping for air after being entombed journalistically for five years: Leapfrog’s Leap into Irrelevance. I looked back to Leapfrog Group’s founding: “Predictions were dire back then in the post dot-bomb nuclear winter. Hospitals would be wildly overbedded. Savvy baby boomers, emboldened by buying books and dog food online, would be calling the shots, making shrewd healthcare decisions and choosing providers based on stringent quality measures that would be plastered all over the Web. Unfocused, change-resistant hospitals, which included all the ones I’d ever worked for or heard of, would be road kill. ”

Listening: Frosting on the Beater, a 1993 album by The Posies, alt power pop from Washington with a big, radio-friendly guitar sound. You either found it a guilty pleasure on VH1 or missed it entirely.

Welcome to new HIStalk Platinum Sponsor Henry Elliott & Company of Wellesley, MA. The company operates in a fascinating, high-demand niche: providing certified experts in InterSystems Cache’, M/MUMPS, and Ensemble for almost 20 years. The company offers experts in those technologies (contract, temporary, remote, and direct placement.) Or, if you are skilled in those areas and are feeling under-appreciated, review the plethora of opportunities in case you’re in the job-changing frame of mind and want to connect with a company that understands and values your highly specialized talents. If you need or have Cache’ or MUMPS expertise, Henry Elliott & Company would love to hear from you. Thanks to those folks for supporting HIStalk.

It’s a 60-40 split that today’s healthcare software cannot or can, respectively, support needed improvements in cost and quality. New poll to your right: a quick read on which vendor is “doing things right” more than the others, which you can define however you like (quality, vision, business, etc.)

Financial performance solutions vendor MedAssets reports Q3 numbers: revenue up 50%, EPS –$0.02 vs. $0.14. Excluding integration costs from its Broadlane Group acquisition, earnings of $0.26 handily beat expectations of $0.16, sending shares flying on Friday to close up 16.7% as Nasdaq’s seventh biggest percentage gainer. I’m not much of a stock-picker and I own no shares in MDAS, but after a year of not-so-good performance (MDAS in blue, Nasdaq in green, and the Dow in red), it looks as though MDAS is moving up out of its trading range on increased volume, which is usually a good thing (duh). Market cap is $712 million.

Weird News Andy can’t decide whether this is a trick or a treat. A man walks into a hospital complaining of leg pain. Astute clinicians postulate that a potential etiology is the bullet lodged there from a Halloween shooting three days earlier. The patient said yes, he did recall that unfortunate eposide, but didn’t think it was a big deal.

New York-based Netsmart Technologies, run by former Cerner COO Mike Valentine, will relocate to Kansas City, creating 130 jobs with plans to hire up to 520 total employees. CEO Valentine never moved from Kansas City since he left Cerner in April 2011 and joined Netsmart in May 2011, so he gets to make all the employees move so he doesn’t have to (those handful willing to leave New York to go to Missouri, anyway, although the company will keep a New York office.) Netsmart sells solutions that include behavioral, public health, substance abuse, and social services.

Medicare’s pilot projects for commercially run disease management programs actually cost taxpayers more money and didn’t improve quality, a study finds. Five of the eight participating companies were losing so much money they paid an exit fee to drop out early. The conclusion is that just calling or visiting elderly patients occasionally doesn’t really accomplish much, and health coaches in such a program need to be given access to hospitals and practices and their patient information to coordinate care.

The DC RHIO is shut down when the city declines to continue funding it. The mayor apparently wants to take the federal grant money and start a new HIE.

UCLA Health System notifies 16,000 patients that their personal information was stored on a hard drive that was stolen in a burglary of the home of one of its doctors. The drive was encrypted, but the doctor had written the password on a slip of paper near the drive and that appears to have been taken as well.

Lawrence Memorial Hospital (KS) warns that patient billing and credit card information was exposed on the Internet for more than a month due to “failed security measures” by the Web host of the hospital’s online bill-pay vendor.

Blue Cross Blue Shield of Delaware offers to spend $30 million in charitable projects, including donating $1 million a year for the next five years to support the Delaware Health Information Network, in an attempt to convince regulators to allow it to merge with Pittsburgh-based insurer Highmark. The state’s attorney general says Delaware citizens have subsidized BCBS to the tune of $181 million and he wants at least $45 million set aside to benefit Delaware.

Massachusetts plans to allow casinos to operate in the state, earmarking 23% of the hefty license fees involved, or around $50 million, toward encouraging the use of electronic medical records in hopes they will help control the state’s rising health costs.