TLC Book Tours asked me to review Your Medical Mind: How to Decide What is Right For You by Jerome Groopman MD and Pamela Hartzband MD. No compensation was provided other than they sent a free copy. I agreed to review the book because I’m a fan of one of the author’s previous books, How Doctors Think. 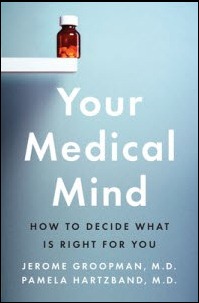 This book asks a sobering question: can you trust clinicians to always recommend the best course of medical action given your particular personal beliefs and circumstances? Reading it can be uncomfortable. You are reminded that medicine is not quite the pure science that it sometimes seems and that most of us would like to believe. There are few silver bullets.

Physicians and patients each have their own value systems and motivations. They don’t always overlap. The authors urge patients to take control of their treatments, do their own research, and work with their doctors to individualize their treatment to their own satisfaction.

This paragraph from the introduction neatly encapsulates the entire book’s theme (to the point that I wouldn’t necessarily suggest buying the book if you already understand this concept):

Despite many scientific advances, the unsettling reality is that much of medicine still exists within a gray zone where there is no black and white answer about when to treat and how to treat. Often, there are several differing approaches to treatment, each with its own risks and benefits. The best choice for an individual may be anything but simple or obvious.

In other words, with apologies to the 1960s counterculture movement: Question (Medical) Authority, but in a constructive way.

Those of use who work in hospitals get this point since we see examples of it all the time. Doctors sometimes offer patients a single treatment option that they themselves admit they wouldn’t accept for their own family members. Professionals whose opinions differ don’t speak up, figuring it’s none of their business. The book will provide a service if it only gets that point across – nobody knows your body and mind better than you, so you need call your own shots when it comes to medical care.

The opening chapter, called “Where Am I in the Numbers?” urges patients to both understand any numbers presented to them (such as, “This drug causes side effects in x% of patients”). Also, to realize that “stories” from other patients may over-influence the perceptions of both physicians and patients since both tend to believe stories that echo what they already believe (or want to believe.)

The chapter called “But Is It Best for Me?” is slightly critical of evidence-based medicine, the idea that if you read enough scientific literature, every patient can be treated from a cookbook. Its key point is that even those guidelines are subject to bias, only this time that of the people who reviewed the literature to create the guidelines for treating “average” patients.

The book also examines the effect of coping mechanisms. An interesting example is the driven patient who, when faced with a new diagnosis, gets consumed with the idea of researching “the best of the best,” convinced that making the right provider choice can overcome the disease process. Conversely, providers and insurance companies have engaged their advertising agencies to use that belief to bring in new business with feel-good personal stories in ads that suggest everything will be fine if you just call up the particular organization with your insurance card handy.

Other patient decisions are addressed. How do you make end-of-life decisions, and are a patient’s “pull out all the stops” wishes good for the society that bears the economic cost? Do economic formulas such as quality of life indicators really mean anything? Should you choose a doctor who thinks like you, or one who doesn’t?

The authors bring forth critical medical issues, especially since it does so in an economically motivated environment where treatment decisions are often driven by the government, computers, and corporations. Most patients would be surprised to find that they have a voice in even routine treatments, and more importantly, that their voice is essential in achieving the outcomes most important to them as a human being. If everything could be distilled into a formula, restaurants wouldn’t need menus – you would just sit down and let the computer order for you the same meal that everybody else like you gets or that you’ve enjoyed in the past.

Your Medical Mind should start (or augment) a patient-centered movement. Medicine may be a science, but treatment is an art. As much as we’d like to see the body as a set of numbers that can be made to go up and down by drugs and surgery, it’s not that simple. Its message is that everybody (and every body) is different, and you can’t treat the body without the involvement of the mind. As wise doctors have said long before technology, you treat the patient, not the symptoms.

I would probably recommend this book, but with reservation. It’s not especially fun to read, especially if you’re like me and want to cut to the chase like the subtitle suggests (how to decide what is right for you.) The patient stories wear a bit thin, especially when they are broken out into sections separated by chunks of often unexciting citations of other works. It seems to me that the core idea was padded out considerably to justify the price of a full-sized hardcover book (it contains 308 pages, of which 90 are acknowledgments, notes, and the index; the stories sag under the weight of pointless detail). It could have done a better job in distilling all the stories into an action plan for various medical circumstances, such as what to ask before agreeing to surgery or starting on a new prescription. Its readability level is probably too high for the average patient to comprehend.

What I would really recommend, then, is that somebody take these and other patient-centered ideas and turn them into something the average patient can start using now. Most patients will never read the book, and many who read it won’t connect it to an immediate medical decision when the time comes to make one. If the idea is to education patients beyond just selling books (which  few people read these days,) then the message needs to be mobilized in the form of videos, checklists, or how-to pamphlets that can be handed out in medical practices. On the provider side, how about a set of guidelines on how to communicate (both ways) with patients about what’s best for them?

My final thought was this: we’re getting further away from what Your Medical Mind advocates, at least for the average patient seeing the average doctor. Insurance companies and hospital-owned practices don’t want to pay for exploring patient wishes. Doctors get paid for cranking out the encounters and following a corporately-developed, cost-effective treatment formulas. The country is already going broke over healthcare costs, so who’s going to pay for anything more than symptom Whac-a-Mole, where limiting an encounter to ten minutes, getting lab results into the “normal” range, and prescribing from standard treatment algorithms constitutes a medical job well done no matter what the patient thinks?

In that respect, Your Medical Mind is revolutionary. The idea “you’re not the (medical) boss of me” is threatening to the status quo. Doctors and patients have to stay on the good side of insurance companies and the government, where “having insurance” is equated to “having access to healthcare.” If there’s going to be a patient-centered revolution, it will need to be fought behind the closed doors of the examination room, where medicine still what it always was – respectful and honest conversations between doctors and their patients about what’s best for them.