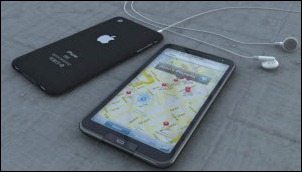 From The PACS Designer: “Re: iPhone 5 launch. It’s official — Apple will hold its launch for the iPhone 5 on October 4. With this introduction, we’ll be seeing CEO Tim Cook give the presentation instead of Steve Jobs. It will be interesting to see how someone other than Steve does with the new feature presentation for the expected crowd.” Purportedly leaked photos are coming about, above which is one. Most interesting to me will be (a) how Tim Cook does, and (b) how long the fanboy lines are. I expect high demand, reinforcing the obvious – the country’s economic suffering is not universally shared as many folks stand in unemployment and food bank lines, while others clamor in similarly long lines to plunk down cash to replace their perfectly workable cell phones with cooler ones.

From Fed Up: “Re: anonymous comments. I’m disappointed that you gave a company my IP address. I now fear for my job.” I don’t divulge anything I receive to anyone, so it wasn’t me, but the comment you left may have contained enough specifics for the company to take an educated guess on its own. If any organization was pressuring me hard to give them information that wouldn’t be appropriate, the first thing I’d do is post the full details of their request on HIStalk and let the readers decide who’s being unreasonable (that’s a lot of bad PR if the company is out of line.) I will, however, always offer companies the space to rebut comments that are incorrect, and unlike newspapers who bury such comments, I’ll put them right in HIStalk if they keep it concise. Seems fair to me.

From IV Drip: “Re: Health 2.0. The on-stage production is well run by the company employed to do that and incorporates live demos and unscripted comments. The non-stage component is what most people complain about – there is a significant lack of organization in vendor relations and logistics. There’s also the point of reference for vendors – it’s not a bland, measured, vendor-subsidized event with a huge exhibit space where content is determined a year in advance. Attendees love drinking from a fire hose of innovation over a packed two days instead of being exhausted after four days of cattle drive-like trudging around mega-halls and a Las Vegas-like show floor. It’s about networking and meeting new people. They could do a better job with logistics, but if it turns into a vendor brown-nosing type show like HIMSS, I and many other won’t be there.” It’s always a tough trade-off – everybody wants a conference that’s information-driven, off the wall, and fun (and largely paid for by vendors), but with good logistics, decent food, and a comfortable setting. Like most parties, the host’s job is to invite the right people, make sure they are relaxed and happy, and stay out of the way. That’s why I like low-key HIMSS chapter events and user group meetings, but never liked TEPR and was indifferent to last year’s mHealth Summit (bad logistics and not all that fun overall.) I will say that with my ultra-limited event organizing experience (a handful of HIStalkapaloozas, with vendor-provided event planners doing most of the work) you don’t have to sell your soul to vendors to get them to participate. Those involved in my events have been almost insistent that their participation be downplayed even though it was costing them a bundle. I always suggest a little vendor fair area for the sponsor or maybe some giveaways or a short company pitch from the stage, but they’ve always declined. However, I guess when you’re charging as much as HIMSS for exhibiting and putting competitors elbow to elbow in Gladiator Hall, expectations are raised.

New HIS-tory from Vince Ciotti, covering AR/Mediquest. If you’ve been in HIT long enough to remember that company and if you’re going to HIMSS in Las Vegas, put your contact information here to get on Vince’s e-mail list for the get-together he’s arranging there for the pre-1980 HIT’ers.

Listening: new from all-girl Dum Dum Girls, kind of a jangly, upbeat, lo-fi version of The Pretenders with some GoGo’s and spaced out Mazzy Star thrown in.

My Time Capsule editorial from 2006 for this week: For Employees in Uncarpeted Areas, Hide Technology Complexity Like McDonald’s Does, in which I said, “Medical errors, including technology-induced ones, have gotten so bad that some hospitals are actually advising patients to bring along a friend to protect them from staff mistakes. I can’t imagine any other business throwing in the towel and admitting defeat to customers. I’d have just two words for a restaurant waiter who suggests that I watch the cook to make sure he doesn’t poison me: ‘Check, please.’”

Time for me to vent (sorry) about trite words and phrases that spread like the plague from the Internet to the parroting mouths and keyboards of the easily impressionable: “not so much,” “meh,” “totally,” “epic fail,” “it’s all good,“ “just sayin’” and anything in the form of “Best. ____. Ever.” I postulate that these are the same vocabulary-challenged people who pleased themselves to no end in the 90s by cleverly inserting random outbursts of “Not” and “Party on, Garth” at every conversational opportunity and are hopefully embarrassed about it to this day. The Internet, like TV before it, can make you smarter or stupider, depending on how you use it (and a survey of the offerings suggests that the smart money is betting on the latter.)

The majority of respondents think Vista Equity Partners got a good deal in acquiring Sage Healthcare, or at least that’s how I interpret it. New poll to your right, suggested by a reader: do you know and/or follow your employer’s policies regarding device encryption and handling of confidential information like PHI?

University of Texas System chooses CodeRyte for enterprise-wide computer-assisted inpatient and outpatient coding. They will also use the company’s DataScout data mining technology.

Welcome to new HIStalk Platinum Sponsor HealthStream. The Nashville-based company offers innovative learning solutions that enable the training and business objectives of healthcare organizations: patient safety, workforce development, regulatory training, and technology education. HealthStream’s customers include 50% of US hospitals. Its Authoring Center is an open platform that allows content creators to develop and distribute learning modules using the tool of their choice – PowerPoint and PDFs, for example. Competency Center is a competency and performance management solution that hospitals use to create customized performance appraisals and competency assessments. The SaaS-based Learning Center is a learning platform and courseware library that supports 2.4 million active healthcare workers, with 70,000 course completions and 100,000 student log-ins every day from healthcare users. Also offered is a turnkey nurse CE library. Hospitals call HealthStream when they need to improve patient safety, implement quality programs, develop nurse effectiveness, improve compliance, and ensure that clinicians are trained to use new technology and medical devices. Thanks to HealthStream for supporting HIStalk.

A Reuters article says that HIT stocks are priced high because of HITECH-spurred revenue growth, but are susceptible for a big fall if Congress gets serious about reining in the red ink and cuts some of the HITECH billions. Specifically named as trading at at a high multiple: Cerner. It’s a pretty shallow article that recites the obvious and, puzzlingly, claims at the end that open source is a big threat to vendors.

Practice Fusion CEO Ryan Howard is profiled in the San Francisco newspaper. He says the company was out of cash and had only 2,000 users at the end of 2008, but has since raised $36 million in financing and signed up 120,000 users tracking 20 million patients in its free EMR. He mentions some company goals: use its customer data for healthcare predictive modeling and create a birth-to-death patient record for patients. The above video, Cracking the Entrepreneur Code, is new and covers some of the same ground about the scrappy startup – he says the company was basically out of business until he got an insurance company check for injuries he received in an auto accident, which he used to make payroll instead of for getting himself fixed up. “When we got funded, I was four years behind on my taxes and needed two root canals. The lesson here: before you go too far down this road, ask yourself what you’re willing to give to pursue your dream.” The first 17 minutes of the video where he’s talking should be mandatory viewing for anyone involved in a startup. It’s fascinating to hear about how in the early days (himself plus three engineers) he did a zero-budget homebrew press campaign to get on the radar of investors.

Greenway Medical Technologies expects to add 400 new jobs and will undertake a $12 million expansion at its corporate headquarters in Carrollton, GA, according to state officials. The company filed for a $100 million IPO a few weeks ago. 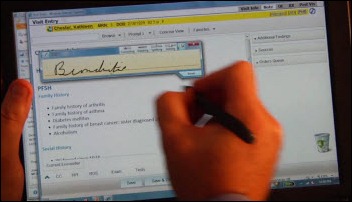 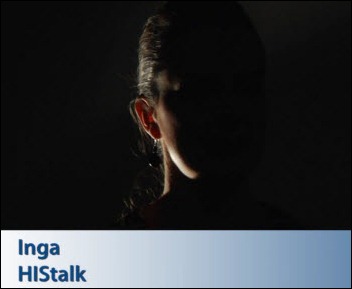 MED3OOO (I can never figure out how to spell the name – sometimes they use zeroes like MED3000 and sometimes Os like MED3OOO) puts out a cool video showing their InteGreat EHR running on an iPad with Medicomp’s Quippe. They unfortunately didn’t post the video anywhere that allows me to embed it here, so you’ll have to click the link, but I promise it’s worth it if you want to see an entirely new way for doctors to document. Quippe is undeniably cool and the InteGreat demo is well done. It even contains a bonus in the last five seconds: an Inga quote. I asked if it’s really her on the video since it kind of looks like her in a shadowy way, but she swears it isn’t. 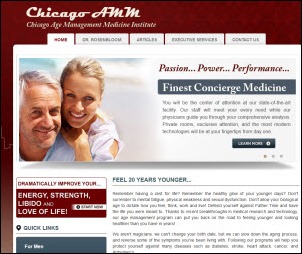 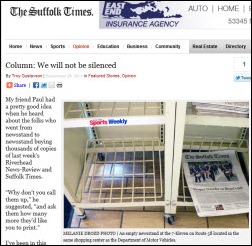 Two small Long Island weekly newspapers are baffled when all available copies are quickly bought up from vending machines and newsstands, with at least two teams of people grabbing all available copies at or above the cover price. Based on the overlapping stories in both papers, the newspaper strongly suspects friends of a local doctor who was charged with Medicare fraud were trying to keep the story quiet. Jesse Stoff MD was arrested for giving kickbacks to patients after billing Medicare for unnecessary services. He billed Medicare more than $800,000 in one month, tipping the feds off to run a sting operation in which an undercover agent was paid $300 for five visits. The money was delivered in a “kickback room” with a Soviet-style poster warning patients not to talk about the scheme.

The Washington state chapter of the American College of Emergency Physicians sues the state over a new rule that limits Medicaid recipients to three ED visits per year for non-emergency conditions. They have a vested interest since ED docs often bill patients directly for their services. The state’s Medicaid medical director says he had to trim $35 million from his ED budget somehow and only about 3% of Medicaid ED patients are frequent flyers who will be affected, not to mention that up to half of the frequent ED visitors go there seeking drugs. The top Medicaid user in previous audits was a 27-year-old woman who visited EDs 172 times in one year (every other day) complaining of headaches.