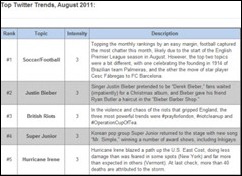 From Auntie Social: “Re: Twitter. I’ve never found much value in Twitter. I’d rather have the Readers’ Digest version of a speaker’s talk versus endless Tweets of every point. Other Tweets are just self-indulgent promotions. However, with the recent earthquakes, hurricanes, floods, and fires, I am finally seeing its value and am hooked.” The fifth hottest Twitter topic in August: Hurricane Irene. Justin Bieber was ranked #2.

From Celerite: “Re: transparency. Vendors should not tolerate employees who use inside testing results to trade stocks of partner companies. Avoid costly mistakes by asking your vendor how they prevent this.” I’m afraid I didn’t really follow this, especially the customer angle, but maybe I’m slow.

From A. Tool: “Re: GE. They’re laying off Americans and moving their X-ray division from Wisconsin to China, but earlier this year, Obama picked Chairman Jeff Immelt as ‘jobs czar’ tasked with figuring out how to create US jobs. Is he really the most qualified guy to be providing employment advice?”

One Medical Group closes $20 million series E funding, led by Maverick Capital. Epocrates co-founder Tom Lee is the CEO and founder of One Medical, which operates nine physician offices in San Francisco and New York. They use a self-developed EMR and other technology to minimize administrative overhead.

Billionaire Patrick Soon-Shiong forms a new company, NantWorks LLC, that will combine his technology businesses, some of which involve healthcare, under a single umbrella.

SRS hires Michael P. Lang as EVP of sales. He was previously with RelayHealth and GE Healthcare. 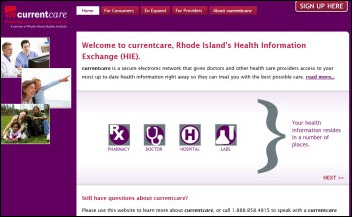 Covenant Health System and Memorial Hermann develop clinical integration programs, in which independent physicians and a health system collectively negotiate commercial payor contracts that include quality and cost incentives. Both programs use CRIMSON physician performance and population management tools from The Advisory Board Company. Covenant reports reducing their average length of stay by 1.1 days and having no reported cases of ventilator-associated pneumonia for 18 months, while Memorial Hermann’s physician group had a 29% shorter length of stay and 15% fewer complications than non-participating doctors.

In Australia, New South Wales will spend $115 million this year on healthcare IT projects that include a statewide electronic medication management system, a specialist EMR, a system for ICUs, infrastructure upgrades, and new corporate systems.

At the same time, our outstanding VA Secretary, Ric Shinseki, is working every day to build a 21st century VA. Many of our Vietnam vets are already submitting their Agent Orange claims electronically. Hundreds of you, from all wars, are requesting your benefits online. Thanks to the new “blue button” on the VA website, you can now share your personal health information with your doctors outside of the VA. And we’re making progress in sharing medical records between DOD and VA. We’re not there yet. I’ve been pounding on this thing since I came into office. We are going to stay on it, we’re going to keep at it until our troops and our veterans have a lifetime electronic medical record that you can keep for your life.

Varian’s ARIA oncology system moves from last place in KLAS’s 2010 oncology system report  to first, beating out Elekta/MOSAIQ and IntrinsiQ/IntelliDose. Epic Beacon earned the highest overall performance score, but was not ranked because of a limited sample size.

Weird News Andy asks, “Who has the brains, who has the heart, and who has the skin in the game?” as he ponders this story: Britain’s NHS is considering turning over its transplant program to a private German company that pled guilty last year to illegally transplanting human organs. The Netcare subsidiary of General Healthcare Group paid over 100 poor children from Brazil and Romania to donate kidneys for its rich customers, performing the surgeries at a hospital in South Africa.