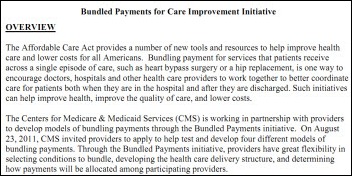 HHS announces its Bundled Payments for Care Improvement initiative, a new CMS program that allows hospitals, physicians, and other clinicians to bill their services as a single package instead of as separate items, giving them incentive to manage care better. Applicants can share in the savings over traditional fee-for-service costs, defining their episode of care as one of four models: hospital stay only, hospital stay plus post-acute care, post-acute care only, or a single all-encompassing bundled payment.

From BubbasChili: “Re: healthcare reform. I have the answer – legislatively re-categorize insurance companies to non-profit status and require that profits over a given amount be distributed back to consumers. I would also push tort reform, but my first idea is the fix. Just my two cents.” Maybe that requirement should be applied to non-profit hospitals first.

From GladItsNotMe: “Re: Lehigh Valley, PA. Has started the evaluation process to replace the old Carecast system. Rumor has it being replaced by that little ol’ vendor out of Madison, WI.” I was too busy at work today to ask Harry Lukens, so I’ll leave this as unverified for now.

From PHEye: “Re: CDC’s Public Health Informatics conference in Atlanta. A speaker complained that HIStalk doesn’t cover public health.” I sometimes touch on public health topics that don’t get much attention otherwise, but those news items aren’t always that interesting to me and probably wouldn’t be to my predominantly hospital-based readers either. And while I appreciate the confidence the unidentified speaker places in a part-time blogger, full-time hospital employee to branch out into an entirely new discipline, I do need to sleep occasionally. I’d be happy to start up a fun, informative public health version of HIStalk as a public service if CDC wants to spend some of its legendary grant money to allow me to quit my day job, but otherwise I don’t have the time to take on new challenges.

From Reporting In: “Re: RelayHealth. Here’s Jim Bodenbender’s e-mail announcing that sales SVP Mike Lang has resigned to work for an EHR vendor. Jeff Gartland replaces him.” I’ll mark this as verified since RelayHealth already updated its management page with Jeff as sales SVP.

From 11YearHITVet: “Re: consulting with less travel. I’m burned out and would like a 50% or less travel schedule. Some of said go into interface work or designing Cerner PowerNotes. Ideas?” I think it depends on how you define “consulting.” Certainly you could do build work remotely, working either for someone else or yourself. Vendors do most of their work of this type offsite given ubiquitous and fast broadband (some of it remotely from Asia, in fact.) But that’s probably not the sexy, high-paying work you’re doing now as the PowerPoint-wielding, suit-wearing expert from afar. If you’re doing general management or operational consulting, it’s really a completely different line of work to do remote technical or functional application support (or to just hire on permanently with a client, for that matter). If  you are willing to make that change and have experience, there’s work out there, especially if you know the hot packages like Epic or Cerner. I’ll let readers chime in since I’ve never been a full-time consultant.

MedAssets gets approval from its board to repurchase up to $25 million of its stock. 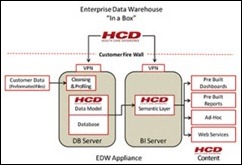 Joyce Hunter, CEO of government healthcare IT consulting firm Vulcan Enterprises, joins HavServe, a volunteerism service for developing countries, as CEO. She has volunteered with a number of healthcare IT organizations, including the local HIMSS chapter, HITSP, Maryland’s CRISP HIE, and Cal eConnect.

Jersey Shore Hospital (PA) and Fulton County Medical Center (PA) team up to implement Meditech EMR. The critical access hospitals expect to save about $300,000 each by sharing hardware at a hosted facility and scheduling training and implementation at the same time. 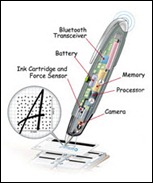 The governor of Guam announces the launch of its first HIE, mentioning that Guam Memorial Hospital will get $5 million in federal incentive money and another $21 million is available for doctors who sign up.

UK health secretary Andrew Lansley calls on developers to create applications that relate to one of five healthcare themes: personalization, improved outcomes, autonomy and accountability, improving public health, and improving long-term care. NHS is running a developer’s contest, but offering no prizes or funding. Consumers are also encouraged to submit their favorite health apps (“maps and apps”) or those they’d like to see developed.

Once again Mr. H was robbed of a spot on this list of the 100 Most Influential People in Healthcare. Representative Paul Ryan tops the list, followed by Vermont Governor Peter Shumlin and President Obama. Donald Berwick, Kathleen Sebelius, and Farzad Mostashardi were included in the top 10, while Judy Faulkner (with an updated head shot) earned the #44 spot.

A watchdog organization finds that only 15 of the largest 100 HIT firms participated in HIT lobbying efforts between October 1, 2010 and March 31, 2011.

The Department of Homeland Security is soliciting vendors to provide an EHR to store medical data on undocumented residents across 22 immigration detention facilities. 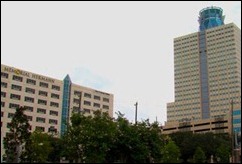 Memorial Hermann Healthcare System (TX) launches Houston’s first HIE. Patients must opt in, with 96% of those that have been asked so far saying yes.

Weird News Andy says he can’t top the quote in this article: “a felony case of stupidity.” A workers’ compensation billing company puts detailed medical information on 300,000 California residents on a server that it thinks is visible only to its employees. Someone Googling discovers that the entire database is wide open on the Internet. The “felony stupidity” comment was in reference to the fact that the company didn’t password-protect the information and didn’t include the “noindex” HTML meta tag that tells search engines to skip indexing that page.

A reader sent over a new JAMIA article called Factors Contributing to an Increase in Duplicate Medication Orders After CPOE Implementation. It looked at the impact of implementing Epic’s CPOE in a 400-bed hospital’s adult and cardiac ICUs (Geisinger, I believe). The number of duplicate med warnings quadrupled, which the study found was caused by (a) multiple providers entering orders at the same time; (b) lack of hand-offs; (c) design problems that caused false alarms; (d) poor data display, where providers entered a new order because they didn’t notice an existing one; and (e) poor local design of order sets that contained pre-built duplicates. Providers both pre- and post-study were neutral about the value of duplicate therapy alerts. The study also found that some potentially duplicate orders weren’t flagged, such as duplicates with differing routes of administration and serial orders where the same therapy was ordered at slightly different times. I didn’t see anything surprising here: duplicate warnings are the ‘stupidest’ of the usual medication screening types (drug, dose, allergy, interaction, drug-lab, drug-disease, etc.) and usually make up at least half of the useless warnings that providers see. There’s no really smart way to tell whether two PRN meds that both contain acetaminophen will be a problem – if the patient gets one or the other but not both, then there’s really no duplication (but that can’t be determined until administration time, not when the order is entered).  Smarter systems ignore route differences (IV vs. topical gentamicin) and maybe skip PRN duplicates and those from the same order set completely, but otherwise it’s almost impossible to separate intentional duplication vs. unintentional. Give the high percentage of provider overrides, one might postulate that duplicate warnings do more harm than good, masking significant problems of other types with their sheer volume and rarely resulting in DC’ing one of the alleged duplicates. I’m not optimistic that it’s a solvable problem – you won’t get a useful answer if you ask providers to sketch out a universal decision tree of when to trigger a duplicate alert, so you can’t expect the computer to improve a process that can’t really be designed. Turning duplicate alerts off completely might be the best strategy. 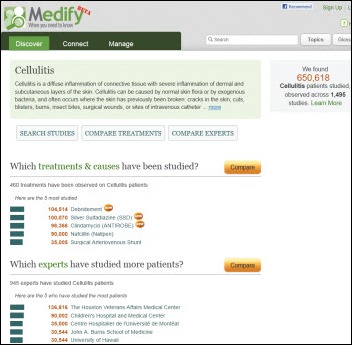 Seattle startup Medify, staffed with former employees of airfare prediction company Farecast, is creating a searchable consumer database of vetted research study information covering side effects, treatments, and symptoms with social networking connections to similar patients. I struck out on my first search when it didn’t recognize “congestive heart failure” as a medical term, but got a lot of information on “cellulitis” (which talked a lot about maggot therapy for debridement). It’s aimed at consumers, but it looks to me like clinicians would find it useful to get current thought on treatments (not to mention that consumers aren’t going to pay out of their own pockets, but the usual pharma/insurance companies might if it could improve outcomes or cost). Besides, a lot of what it returns is barely understandable even to providers, like when I clicked “clindamycin” for cellulitis and got, “A semisynthetic broad spectrum antibiotic produced by chemical modification of the parent compound lincomycin. Clindamycin dissociates peptidyl-tRNA
from the bacterial ribosome, thereby disrupting bacterial protein synthesis. (NCI04)” Not exactly a compelling Facebook post like the maggots would have been.

The Washington Post highlights an interesting conflict: Medicaid is trying to reduce overuse of EDs as free doctors’ offices to save taxpayer dollars, but much of the potential savings isn’t being realized because hospitals are aggressively marketing their EDs for routine care, hoping to pump up profitable admissions. A quote from South Carolina’s Medicaid director: “When you are advertising on billboards that your ER wait time is three minutes, you are not advertising to stroke and heart attack victims.” For-profits HCA (which runs wait time billboards) and Tenet (which runs billboards and also accepts online ED appointments) claim they haven’t seen a significant increase in Medicaid visits.

Hospitals in Wales are testing university-developed software that can reduce wait times and analyze the cost-effectiveness of medical treatments. It uses simulation and queuing theory, which the project’s director likens to a 1990s computer game called Theme Hospital that allows what-if analysis. 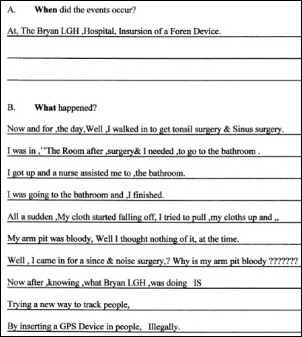 Here’s the kind of lawsuit lunacy that forces hospitals to hire expensive lawyers. A (barely literate) former patient claims a hospital surgeon, while removing his tonsils, implanted a GPS tracker into his armpit.