From Big Ragu: “Re: HHS CTO Todd Park. Gave a great speech at the Health 2.0 NYC meetup Friday. He was a really dynamic and engaging speaker and showed off some amazing projects from Health Data Palooza, sponsored by IOM and HHS.” He’s at the 51-minute mark of the video here.

From Wanderlust: “Re: [vendor name omitted]. Lackluster replacement for [former VP 1], internal political fights over who owns product strategy, no progress on new revenue cycle product, offices being consolidated, open platform not what was promised to partners, and a shaky start to integration as employees freak out about their long term job prospects. This employee is putting down my copy of Visual Studio and checking out Monster.com. But wait, another rumor is making the halls of the office that does create some hope. That rumor is that [former VP 1] and [former VP 2] may be returning.” All unverified. I’m doing some liberal expunging since obviously there’s no way the company can confirm or deny so I’m not comfortable just throwing it out there, but I’ll say that Wanderlust was mostly right on some items sent my way earlier this year. I just talked to [former VP 1] this week and didn’t get any feeling that a return was imminent, so I’ll attribute that last sentence to wishful thinking. 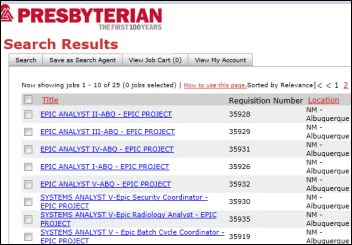 From HappyNotToBeAMcKessonite: “Re: McKesson. Loses another large system, this time in Albuquerque, to guess who? Good luck finding Epic specialists through job boards. This health system has been cheap in the past, so it’s interesting they have allocated $90 million for the project.” Unverified. The health system wasn’t named, but I assume it’s Presbyterian, which signed a much-touted $22 million Horizon and homecare deal way back in 2001, the same year McKesson bought the rights to Vanderbilt’s WizOrder and called it Horizon Expert Orders. Presbyterian has a lot of Epic jobs posted that look like inpatient, so you can draw your own conclusions. 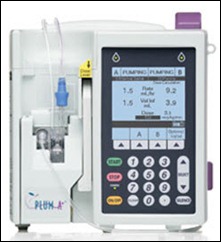 From PumpDoc: “Re: IV pump design errors. I think you have given readers the impression that my company’s Plum A+ pump was the cause of the errors and that’s not true. Can you please clarify? Ours doesn’t have the start button next to the zero and decimal point. I’m guessing someone just picked a stock pump picture to go with the story. Thanks – I am an avid reader!” Correct – I just put up a general picture of an IV pump that didn’t really have anything to do with the article, other than for someone who didn’t know what an IV pump looks like. The article didn’t implicate any particular brand of pump, so it wasn’t the Hospira pump, which as the full-sized picture above shows, has the Start button on the upper left.

From Lodi: “Re: new HIMSS certification. Seems to duplicate the HIT program.” The National Science Foundation is apparently paying HIMSS to develop an entry level certification program, Certified Specialist in Health Information & Management Systems, kind of a junior CPHIMS, which is itself kind of a junior everything (advanced degree, relevant experience, useful specific certifications like PMP or CISSP …) Would you really hire someone on the basis of a credential proving that they are “entry level?” I’ve yet to see any general certification that’s worth anything other than to ease the sometimes justifiable anguish of the resume’-insecure, but it’s their money. 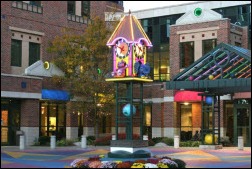 From HIStalker: “Re: salaries. A $6 million hospital CEO!” A hospital CEO salary survey covering only the Midwest finds the pack led by 314-bed Children’s Mercy Hospital and Clinics (MO), which paid its CEO $6 million in the most recent year. Must be a terrible place to work if that’s what it takes to get someone to run it. Mercy Janesville paid $4.5 million, Advocate $4 million, and Northwestern $3.4 million. It’s bad enough when private industry CEOs make massive multiples of what the worker bees are paid, but absurd when talking about non-profit hospitals, all of which ironically anguish publicly over escalating healthcare costs. If public school systems or soup kitchens could bill Medicare, I suppose they’d be unnecessarily run by $2 million administrators.

Honky Cat was moved to wax poetic about HIStalk:

An Ode to HIStalk
It’s 9pm and my bourbon glass in reach;
Mouse, keyboard, email, and alas,
An alert from HIStalk breaches the still.
Curse your anonymity!
Show your face and be criticized.
Yet the rhythm of my heart accelerates.
For I know the contents will amaze and amuse;
I may learn one morsel of data,
One shard of vendor information,
That cuts deeply to the quick
And such as a participle, hangs with an airy loft.
Or, perhaps a CIO interview that portends the strategy versus the reality;
Inga and her shoes.
Could she be the muse?
What have I to lose?
There is meaningful use.

This week’s Time Capsule editorial from 2006 lauds the hard-nosed vendor negotiation style of former NPfIT head Richard Granger. A snip: “Granger holds firm and goes public when he has to, unafraid to rip recalcitrant vendors by name. I like to picture him as a Gordon Ramsay-type scrapper, happy to take someone down a notch when they need it.” Knowing now that NPfIT is pretty much ash-heaped, you might smirk that I was way off base, but I argue no: the real problem was that, despite all that aggressive negotiation and multi-billion dollar contracts, there just were not any contractors or vendors who could pull off their part of the project. They overcommitted and under-delivered, but in this case, poor performance hit them hard financially and they walked away. Granger’s threats were a bit hollow since there were only so many potential contractors out there and the pioneers were coming back with arrows in their backs.

Listening: Big Big Train, recent British progressive rock that sounds like 1970s Genesis before Phil Collins ruined it by selling out to make teen dance tracks. Think And Then There Were Three, from which “Undertow” is one of my favorite songs of all time with amazing music and lyrics. Big Big Train is right up there with them.

A slight majority of poll respondents think hospital CIOs wield undue influence over clinical system selection and implementation. New poll to your right: should HHS study the effectiveness of EMRs and their impact on medical errors as Congresswoman Ellmers has urged? Click the Comments link on the poll widget to explain your rationale if you are so inclined.

Am I the only one getting weary of announcements proclaiming that XX hospital or practice is the first in some state to get Meaningful Use money? I figure there are 50 states, you have both EPs and hospitals, and MU comes in both Medicare and Medicaid flavors, so that’s a potential crap-load of self-congratulatory vendor press releases to wade through, none of which really mean a whole lot. Far more interesting would be a list of certified EMR vendors who don’t yet have even one customer that has received a check. It wouldn’t be any more meaningful, just more fun.

Iowa Children’s Hospital develops a Facebook medication reminder system for teens, especially transplant patients. The patient clicks on which meds they’ve taken and the information is sent back to their PCP.

Some excellent posts you might want to check out: Don Michaels concludes on HIStalk Practice that providers shouldn’t move too quickly to sign ACO contracts given demonstration group’s lack of success in earning payment, while Dr. Travis dissects WellDoc’s consumer health apps on HIStalk Mobile. 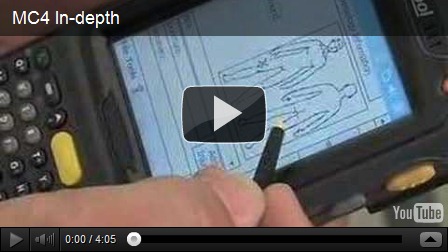 The Army tests its MC4 battlefield EMR  on iPad, iPod Touch, iPhone, and Android devices, expecting approval to replace their outdated Motorola handhelds with tablets later this year. What they like: larger screen, gestures, the ability to run common apps, the ability to access the Internet, and patient lookup by their ID card.  Above is a 2008 video of MC4 running on the Symbol (acquired by Motorola in 2006).

It’s been a crazy stock market week, so I thought I’d check the current vs. month-ago prices of some HIT stocks:

A conservative political group in Kansas called SOCK (Stop Obama Care in Kansas) wants the state’s Republican party chair to quit, saying that Amanda Adkins has a conflict of interest because she’s an employee of Cerner, and as such has a vested interest in both Obama Care and the government’s push of healthcare IT.

As you must know, Cerner Corporation is not taking a passive stance in hopes of remaining a key player and profit taker in the HIT industry but is very aggressively working, including to influence the government, to ensure its leading position in the HIT industry is maintained if not enhanced. The position of your employer, Cerner Corporation, is diametrically opposed to that of the State of Kansas, the current KGOP platform and the vast majority of the GOP rank and file as well as other Kansans.

SAS hires Graham Hughes MD as the first chief medical officer for its Center for Health Analytics and Insight think tank. He was previously CMIO of GE Healthcare IT. 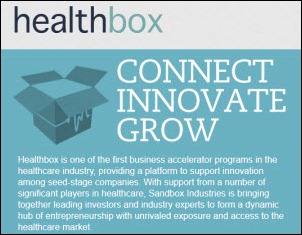 Ridgeview Medical Center (MN) partners with Healthbox to launch a three-month mentorship for up to 10 HIT seed-stage company entrepreneurs.

One of the inventors of the IBM PC says PCs in general are extinct, just like the typewriter and vinyl records. He replaced his own PC with a tablet, but says the devices themselves are not innovative – it’s the social spaces they access where people and ideas meet.

The fascinating story of SAI and its family tree in both directions, in this week’s HIStory from Vince Ciotti (he’s the hirsute lad on Slide 9, wearing a sofa-patterned, suspender-supported plaid suit and flanked by an avocado green touch-tone telephone). He loves your feedback and input, such as suggesting which long-gone companies he should write about (my list: Atwork, Continental Medical Systems, HealthQuest, Health Data Sciences, Phamis, and TSI).

Children’s Hospital Colorado is hit with a federal equal opportunity lawsuit for rejecting a job applicant for a staff assistant position who they found to have fibromyalgia, meaning she can’t sit at a desk or work on a computer for long periods. She wants the job, back pay, compensation for emotional distress, and punitive damages.

Stanford bioinformatics researchers mine the electronic patient databases of Stanford University Hospital, Vanderbilt, and Partners HealthCare to discover a drug-drug interaction between the heavily prescribed drugs pravastatin and paroxetine. Said the study’s lead author, “We’re bioinformatics people, not clinicians. We can develop ways to mine these huge data sets for interactions that have escaped attention, but you have to start with a clinical expert to curate a set of drugs and effects so you’re looking for something that actually matters in the real world. I’d love to hear from pharmacists about the kinds of questions they would like answered with data-mining. Their drug knowledge is invaluable to this kind of program.”

West Penn Allegheny Health System (PA) will partner with Highmark, Allscripts, and Accenture to offer EMRs to private practices. A local physician says WPAHS is obviously trying to keep its beds occupied: “If a hospital comes into your office and offers to front you $250,000 for an electronic medical records system, they’re not doing it out of the goodness of their hearts.”

Florida’s multi-millionaire Governor Rick Scott is criticized for paying low rates on state-provided health insurance, which he says is appropriate since he has the same plan and cost as everybody else. State big shots (all 32,000 of them) apparently get family medical insurance for premiums of less than $400 per year. Wildly generous state and federal government employee benefits and retirement plans somehow never seem to come up in all the zeal to control the cost of entitlements.

In India, a former hospital COO is arrested for stealing the hospital’s patient data and selling it to other hospitals through a consulting company he started. The hospital got wind of what was happening and installed keylogging software that showed him e-mailing information from his personal account.