From The PACS Designer: “Re: LogMeIn Central.  LogMeIn has announced a new cloud based service called LogMeIn Central for IT administrators to monitor network uses by iPad and iPhone users.  As the expansion of iPad usage increases in institutions, it appears to be a solution that could ease the management and demand for information access by users.”

From Epic Guy: “Re: Johns Hopkins. Announced today at Epic that they are our latest enterprise customer. Probably not a big surprise to most readers of this blog.”

Listening: reader-recommended Joe Bonamassa, an amazing blues/rock guitar virtuoso. Here’s live video of his cover of Yes’s Heart of the Sunrise and Starship Trooper. Pretty old school for a guy who’s only 34.

The folks at CapSite hooked me up with access to their database of actual RFPs, proposals, and hospital contracts after I wrote a little about it a few weeks back. I pulled up a few vendor products and was instantly looking at individual facility price breakout worksheets and actual PDF contract scans (I love terms and conditions, so I was engrossed, although I felt kind of dirty reading some other hospital’s contract even though the facility name was redacted). They’re offering a free 30-day trial of CapSite Lite to providers. I’m not pitching it, just saying that if you would benefit from seeing the kind of deals other hospitals are getting or interested in market reports, you could give it a look for free.

Prognosis Health Information Systems is supporting HIStalk as a Platinum Sponsor, which I appreciate. The Houston-based company offers the Web-native, standards-based, HIE-ready ChartAccess EHR for rural and community hospitals, one of the first to be certified by CCHIT way back in 2007 and again among the first with ONC-ATCB Stage 1. Its affordable, modular solutions include CPOE, clinical decision support, eMAR, pharmacy, clinical documentation, ED, lab, radiology, ADT, document management, patient scheduling, patient accounting, and even an ambulatory EHR, all running on client-free SQL Server with a choice of local or remote hosting. Its value prop involves minimal hardware cost, centralized maintenance and upgrades, automated backups, and shortened time to go-live (Ness County Hospital in Kansas was live four months after choosing ChartAccess.) They’ll even finance its purchase. Thanks to Prognosis for supporting the work we do.

GE Healthcare has begun the previously announced relocation of the global headquarters of its diagnostic imaging business from Waukesha, WI to Beijing, China.

Wentworth-Douglass Hospital (NH) goes live on Soarian’s CPOE this month and on Soarian Financials in October.

Concerro releases a new video pitching its Internet-based ShiftSelect employee scheduling and shift management system. The male actor is a Bill Shatner-type scenery-chewing bad actor (maybe intentionally so — check out his hammy foot-stomping emphasis at 1:00), but his female counterpart is good. 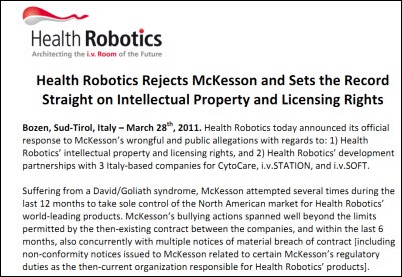 Italy-based pharmacy technology vendor Health Robotics takes on a Spanish partner to help with US marketing after a legal squabble with former distribution partner McKesson. In a no-holds-barred announcement in March (written by too-perfectly named marketing coordinator Claudia Flaim), Health Robotics accused McKesson of having a “David/Goliath syndrome” in taking a “bullying strategy” after being “unwilling to cope with competition” and then making up “a non-existent excuse for its own failures.” I don’t know who’s right or wrong, but give the scrappy upstart points for coming out swinging, although heavy legal expenses so early in a product’s rollout can’t be good for business, especially when you’re a new Italian company trying to get a US foothold.

The VA will allow iPhones and iPads on its hospital networks starting in October, with initial access provided to e-mail and VistA. It’s even considering allowing employees to choose one of those devices instead of a laptop. CIO Roger Baker says his IT department will soon roll out approved access to cloud computing applications, which got some VA users in trouble last year who were found to be keeping patient information in Google Docs.

Thumbs up to Apple. Over the weekend, my iPhone slipped out of pocket and hit the pavement, cracking the screen. I scheduled an appointment at my local Apple store with one of the Geniuses, even though I didn’t have much hope they could do anything beyond selling me a new iPhone 4.  After I flashed the designated Genius my best Inga smile and showed him the sad state of my phone, he explained that cracked screens were not covered by warranty. However, he said he would go ahead and switch out my old phone for a new one at no charge. Perfect customer service and the right thing to do, especially given Apple’s  release of the Phone 5 in just a few weeks.

Uh oh. Apparently Google is deleting the Google+ accounts of users not using their real names. Lame. If Inga HIStalk stops following you, go ahead and blame Google.

Nurses at a New Zealand hospital complain that “dumb” staff scheduling software from HealthRoster is to blame for nurse fatigue, saying it creates schedules with long runs of consecutive work days and rotating shifts that allow as little as seven hours between them. 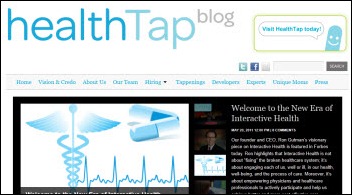 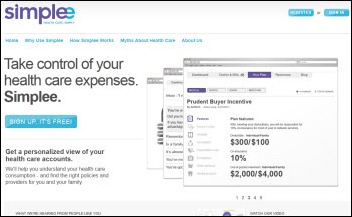 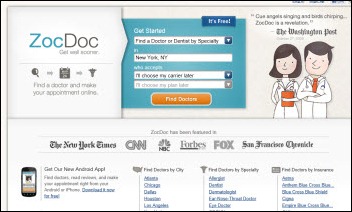 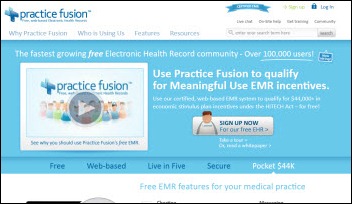 Weird News Andy can’t decide whether it’s the instrument or the “doctor” that’s not the sharpest knife in the drawer. Police find a 63-year-old man lying naked outside his house with a knife handle sticking out of his stomach, which he then removes and replaces with a lit cigarette. He had noticed a protruding hernia and decided to remove it with a butter knife. A surgeon contributed advice that is most likely unneeded by anyone other than this individual: “It is absolutely impossible for someone to fix their own hernia.”