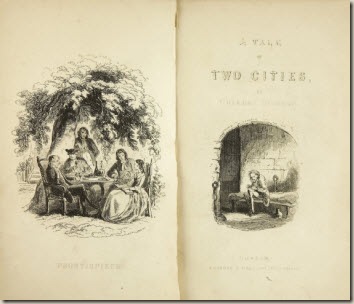 I was looking for the perfect quote to start this week’s Curbside Consult and thought I had it nailed. Like many avid readers, I tend to remember bits and pieces of great literature, but not everything. Just enough to do passably well at cocktail parties and trivia nights, but not well enough to lead a book club.

So, when I hit the Internet to validate the quote I was going to use, I was blown away by the parts I had conveniently forgotten.

This is the opening of A Tale of Two Cities by Charles Dickens. I was going to use the best of times / worst of times metaphor to talk about two recent physician visits, one of which was electronic and one was paper. I’ll let you guess at which one was which because the poignancy of the rest of the quote and how applicable it is to healthcare in general strikes me too much to want to talk about anything else.

First published in 1859, the story is set in the tumultuous time of the French Revolution. The opening line serves largely to portray the contrasts inherent in that time — poverty vs. affluence, ignorance vs. enlightenment, good vs. evil, and so on. When you think about it, sometimes it seems that things haven’t changed as much in the last two hundred as we might have hoped. It feels like we’re on the cusp of a different kind of revolution, and not necessarily for the better.

Undoubtedly, this is the best of times for many people. People are living longer, largely due to improvements in health technology. Mechanical replacements for diseased body parts, amazing new drugs, implantable defibrillators — you name it.

We are, however, in a system with a great deal of inequality about how this technology is employed, resulting in a great cost to society and for many a great personal cost as well. Medical bankruptcies are again on the rise, accounting for more than sixty percent of all personal bankruptcy filings. The worst of times, indeed, when people have to choose between purchasing food and filling their prescriptions.

Meaningful Use should be the poster child for the age of wisdom and the age of foolishness. It seemed so promising: “free” federal money for providers to do what they should have been doing all along, implementing systems to improve patient care and strengthen patient safety. Many providers were already doing these things, and it seemed so easy to reward them.

The way it’s unfolding, though, is just sad. The disparity between the Medicaid and Medicare incentive programs is laughable. At times, the whole business feels like a crapshoot. If this were an investigative study, it would never have made it past the Institutional Review Board.

Many of us on the healthcare IT side of things are living in the spring of hope. We’re well on our way to having the right software installed with the right workflows and the right numerators and denominators kicking out at the end.

For some of us though, this will lead right into the winter of despair. Meaningful Use is the ultimate pass/fail class. Miss the mark by half a percent on one measure and you’re out. This doesn’t seem in keeping with the spirit of trying to improve healthcare and health outcomes.

What if we treated patients like this? “I’m sorry Mr. Jones. I know you’ve done a tremendous amount of hard work to get your diabetes under control, including exercising and losing weight. However, your hemoglobin A1c level only came down from 9.0 to 6.2. The goal was 6.0, so you lose. Here’s a scarlet ‘L’ to wear on your shirt. I’m raising your health insurance premiums by 40%.”

Many of my peers have done the math and know that even with the penalties that are coming, they can “do nothing,” see one or two more patients a day, and come out far ahead of their colleagues who are on the MU hamster wheel. Could the unintended consequence of ARRA and healthcare reform be the downfall of Medicare and decreased health outcomes for our growing senior population? Will it be the final blow to an already ailing primary care workforce? Will it be little more than a windfall for technology interests and consultants?

Only time will tell. But I leave you to ponder on the closing lines of the book.