From Kip Keino: “Re: Ultimate Software. I heard a rumor they are for sale. They are an HR Payroll Saas Provider with significant healthcare presence.” I haven’t mentioned them since way back in 2004. Rumor is they’ve hired an investment banker to get the sale underway, although the company officially denies it. With a market cap of $1.5 billion on a couple of hundred million in revenue (and a PE ratio of 740!), I’d say it’s strongly possible, especially with Oracle and SAP flush with cash and a lot of hatred for each other.

From Dabney: “Re: WellStar. Lots of speculation why CIO Ron Strachan departed. This article in the local paper says he was fired and speculates why four senior execs, including the CEO, have been fired over the last six months or so.” The attorney representing the former medical group president and former CIO says they came to him about unspecified work issues. They were marched off the property by security this week. The article suggests the firings may have been related to a possible whistleblower lawsuit. The five-hospital Marietta, Georgia system paid the state $2.7 million last fall to settle improper Medicaid billing charges, which was followed by the firing of CEO Gregory Simone. 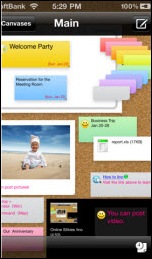 From The PACS Designer: “Re: lino – Online Stickies. TPD has found an application called lino -Online Stickies that provides sticky notes for your iPhone or iPad. It seems to be an application that could help practitioners through the posting of reminders during clinical rounds.”

From GI Doc: “Re: NEJM article. What do you think of it? It’s certainly a laundry list of problems in healthcare IT, but all I can see are a lot of vague prescriptions based on wishful thinking about how to solve them. But it sure puts the author in a position to say ‘I told you so’ about just about anything that can and probably will go wrong in the future.” It’s hard to believe this compendium of trite EHR observations warranted NEJM real estate. How many times do we need to read that healthcare IT has potential, but more work is needed to make it perfect? I’m as cynical as anybody, but those who use lack of perfection as rationale for doing nothing annoy me. I can’t think of any other industry that has argued so hard against using computers, although I’d support more government standards and even internal, IRB-type oversight within a given institution since I’ve worked in enough well-intentioned IT shops to distrust their project objectivity vs. patient safety (and some hospitals stupidly let their IT department single-handedly run projects that directly affect patients, which makes as much sense as turning them over to the departments that oversee electrical and plumbing). I’ve concluded that almost no one is objective about healthcare IT: the same person is nearly always for it or against it and will argue their position endlessly. Someday they’ll figure out that IT is neither good nor bad, so it deserves neither universal accolades or criticism — it’s just a tool that can make outcomes and cost better or worse depending on who’s using it, what they’re using, and how they’re using it (no different than a paper chart, an antibiotic, or a scalpel). Technology alone rarely makes sucky providers better or excellent providers worse.

I’m running the first of my “time capsule” editorials I wrote for an industry newsletter over several years (odds are you haven’t seen them since it was a boutique-type publication with a limited, high-level audience and no free subscriptions). I didn’t want to send an e-mail blast because some high-strung reader was sure to complain about the two seconds required to delete it, but the first is Is Forcing Physicians to Use Computers a Flawed Paradigm? I wrote it in 2006, but I’ll be surprised if it doesn’t still trigger some impassioned comments.

Listening: The Golem, a rock opera new on CD from Black Francis (aka Frank Black of the Pixies).

Nobody in my most recent poll thinks EMR vendors own the patient information stored on their systems, but that hasn’t stopped companies like Cerner and Practice Fusion from selling it. Beyond that, a full 29% of readers think the provider owns the data, not the patient. New poll to your right: should the VA/DoD replace VistA with an internally developed open source system or go with a commercial package, such as Epic’s? I’ve asked a similar question before, but I’m curious to see what readers think now as the Wisconsin politicians try to steer the government toward Epic.

A few readers have reported sudden problems reading HIStalk using older versions of IE. I’ve got a programmer trying to code around an IE design limitation that plagues no other browser (Firefox, Chrome, Opera, etc.) Microsoft fixed it all recent IE versions, but “don’t make us work harder” IT shops often lock down IE to old versions, frequently IE7 (released over five years ago) but sometimes even IE6 (released 10 years ago). Internet Explorer 9 is the current version, as of a couple of weeks ago. I would explain the nature of the bug, but I doubt anyone really cares other than me. My guy’s pretty close to a fix, I think. If I wasn’t already an IE non-fan, this would do it.

T-Mobile, soon to be part of AT&T if regulators approve, makes two healthcare-related announcements. GeaCom’s Phrazer, a video-powered translation product (video above, which would have been a lot more effective edited down to two tight minutes since it meanders painfully), will run on its network, as will wireless sensor-based monitoring from BeClose.com.

ONC posts its five-year strategic plan and invites public comment. The bullet points: (a) continue pushing Meaningful Use to increase adoption and information exchange; (b) reduce costs by improving population health via technology; (c) update the government’s approach to privacy and security; (d) give individuals access to their health information;  and (e) use healthcare information to improve healthcare knowledge.

The Motley Fool uses Allscripts as an example of why investors should ignore a company’s earnings (which are subject to accounting decisions) and instead look at its free cash flow (operating cash flow minus capital expense) from high-quality sources, ignoring that produced by items such as not paying suppliers or increasing accounts receivable collection in a non-sustainable way. It says 29.2% of Allscripts’ operating cash flow comes from “questionable sources,” such as stock-based compensation and related tax benefits. I’m not sure I buy the argument, at least as long as a company generates consistent earnings, but I suppose you could consider free cash flow an early warning system for earnings that could be threatened down the road. Not to mention that Allscripts had a high capital expense that brought down its free cash flow number, which could be a great thing if it’s using that capital to expand to increase future earnings (and not to mention that who knows what any of this means with the Eclipsys acquisition still fresh).

A report by the Nashville Technology Council concludes that the city is “the Silicon Valley of healthcare IT” based on the number of open IT jobs there. I’d say the methodology was shaky at best: a company checked national and local job portals and counted the open tech positions in Middle Tennessee, finding 925 open positions. I don’t know that I’d consider open jobs as a strong indicator of a city’s influence or appeal, although Nashville certainly has some big companies (mostly for-profit, but not all) that influence healthcare in ways sometimes good, sometimes not. Having no state income tax certainly helps in recruiting people and companies. 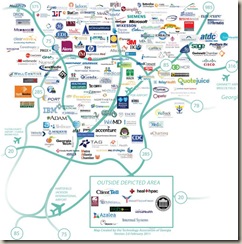 And speaking of Chamber of Commerce-type bragging, Georgia says it’s the #1 state in terms of healthcare IT revenue at $4 billion. It helps to have McKesson Provider Technologies in your back yard since I’d bet at least 25% of that figure is theirs, not to mention that many companies have Atlanta regional offices but not their national headquarters (like San Francisco-based McKesson and the former Eclipsys, now part of the Chicago-based Allscripts). Still, companies boost local payrolls and the tax base with a local presence, even if all the big decision-makers live elsewhere. Above is a map of Atlanta company offices from TAG Health (click to enlarge).

Voalte’s nurse communication system gets coverage on the Tampa TV station. It’s a good piece, although the talking head TV doctor wearing a gratuitous white coat in the TV studio (with a Fox 13 logo on it to boot) is a bit much.

Boston’s mayor welcomes NaviNet to the city and its new headquarters. It wasn’t  big move for the company, which offers provider-insurer connectivity, eligibility, PM/EMR, and patient communications — they relocated from Cambridge (1.8 miles from their old address to their new, according to Google Maps). Note to Nashville and Atlanta: according to Hizzoner’s fightin’ words, “Boston is unquestionably the country’s premier location for healthcare and technology innovation.”

Hello, Becker’s ASC Review: e-prescribing is not the same as inpatient CPOE.

A report says that Dutch technology vendor i.Know has been acquired by Intersystems. The company’s healthcare offering turns text-based information, such as clinician documentation, into structured data to create a physician dashboard for the patient. You can play around with a demo on their site at least theoretically, although all I got was a black screen.