We’re trying a new way of organizing our posts in response to reader survey suggestions, so don’t panic that you flipped to the wrong channel.

We tried to figure out an orderly way to arrange everything to allow quick skimming while letting you know whether Inga or I wrote a given item (thus our names at the end of each) since that means we can’t have separate sections a la HERtalk by Inga and you may want to respond specifically to whomever wrote something. We may ditch that later, or shorten the identifier. We’ll see.

You get a little more white space on the page, which is nice. Easier on the eyes.

I’m sure we’ll be fine tuning and getting comfortable with it. It’s extra work for me, so you can help me decide whether it’s worth it. Comments welcome. UPDATE: vote your preference below. We’ll go with the majority starting with Thursday’s post. 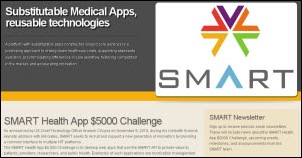 The Children’s Hospital Informatics Program (CHIP) and Harvard Medical School make their SMART platform and interface available. The app store-like system, built with a $15 million ONC grant, is open to developers to create Web applications with specific applications that are scalable and substitutable. They’re offering a $5,000 prize to developers who build the best application as reviewed by a panel of judges, with the winner to be announced in June. Project co-leaders are Kenneth Mandl, MD MPH and Isaac Kohane, MD PhD. [Mr. H]

Paul Concocenti, CIO of NYU Langone Medical Center, steps down as SVP, vice dean, and CIO to “pursue broader healthcare IT opportunities that simply are not available at one medical institution.” Nader Mherabi will move from his current role as VP and CTO to serve as interim CIO. NYU Langone is in the midst of a $200 million Epic implementation. [Inga]

Even though nearly 83% of office-based physicians are eligible for Medicaid or Medicare EMR incentives based on the number patients seen, over 70% of eligible physicians don’t have a basic EHR. A Health Affairs study also finds a disparity in eligibility among different specialties, with the vast majority of family practice and internal medicine providers likely to qualify, but fewer than two-thirds of pediatricians, OB/GYNs, and psychiatrists. Researchers recommend broader eligibility requirements to help more specialists qualify and encourage more EHR adoption for smaller practices. [Inga]

From Walking in Memphis: “Re: booth babes. Let’s see…your avatar is a nubile, stylish, attractive female whose passion is shoes of the spiked variety and your problem with booth babes is the exploitation of their gender? Really?” Really, and this really is going to be my final comment on the subject. I am pretty sure Walking in Memphis is suggesting that I am a hypocrite and I won’t argue that point. However, I will add that just like my avatar, I am a nubile(ish), stylish, attractive female. I also happen to have a passion for shoes of the spiked variety. The difference between me and booth babes, however, is that the lovelies’ raison d’etre is eye candy. I do hope that I offer more value than that. [Inga]

From Steve: “Re: FirstNet problems. What has struck me toward the end of the article is that it sounds like this health system doesn’t have a good change control process in place. I got that impression reading the part about ‘constant minor setting changes’ leading to changes for everyone. I think of the change control process as something like taxes. Everyone hates it, and yet it is also insanely important for proper running of the system. Outside of that, I can also see many truths in the problems they are having with Cerner’s own departments not talking to each other to coordinate build, etc.” I don’t doubt technical and vendor issues contributed to the situation there, but I’d bet any amount of money that the client isn’t guilt free. First and foremost, they’re the ones who bought FirstNet, so complaining how it works now implies lack of due diligence (not to mention that it works fine in a lot of other places, with the variability being the driver, not the car). The decision was made top-down from what sounds like an out-of-touch bureaucracy, a sure predictor of user pushback whether it’s Cerner or SAP. I’d bet the schedule was pushed, the communication was poor, and the project oversight left to IT or other departments out of touch with what people really do. Not to mention that everybody loves the system that’s going away and being the new stepmom brought home by a beaming dad to meet the kids is a tough situation. [Mr. H]

From BeKind: “Re: University of Cincinnati. HIStalk said 8/2/10 that they would spend up to $100 million on a clinical system. The decision: Epic.” No surprise there – if  you had $100 million to spend, what else would you buy? UC says they’ll be live everywhere in 18 months. [Mr. H]

From England Dan: “Re: Ohio Health Information Partnership. Announced today that Medicity will be their HIE vendor.” Unverified. I couldn’t find a press release, but I knew a state announcement was coming up this week. I’m told it went out via a statewide telecast. [Mr. H]

From Mogall10: “Re: Rob Seliger. Rumor has it that the former CEO of Sentillion has resigned from Microsoft.” Verified. Moving to Redmond was imperative, yet undesirable, we hear. [Mr. H]

We have found video of the stage portion of HIStalkapalooza, including the full HISsies presentation with Jonathan Bush that people keep asking for. Coming soon. [Mr. H]

Clinical documentation service provider Transcend Services enters negotiations to acquire medical transcription company DTS America. The purchase price is expected to be $7.9 million in cash, plus an earn-out of up to $4.2 million payable in 2012. DTS generates annual revenues of approximately $12 million. [Inga]

Cerner will take over parts of the electronic medical records projects at two hospitals in Ontario, resulting in a 27 FTE reduction in hospital headcount with an additional nine IT positions eliminated. Opposition parties had criticized the arrangement claiming it allows Cerner to sell the hospitals’ de-identified patient data for a profit. [Mr. H]

Athenahealth CEO Jonathan Bush is featured in an Economist panel discussion called It’s a Smart World. The whole think is worth a listen, but I’m a sucker for the pop culture references. “The idea of ownership of data … it’s like that guitar in Spinal Tap that you’re not allowed to look at because it’s just too fragile or too special. It’s just a guitar, right? It’s just some information. The thing that I think we worry about is somehow being outed or treated poorly and I think that if you are given information under certain conditions, that’s why it’s important that there be buy-in through every layer of intelligence that gets added to the healthcare cloud that those conditions be honored.” [Mr. H]

Eastland Memorial Hospital (TX) implements Prognosis ChartAccess Comprehensive EHR and readies for participation in the Texas RHIO. The 52-bed hospital anticipates a rapid implementation: software installation was scheduled for March 1 and the hospital plans to start its Meaningful Use attestation May 31st. [Inga]

Reliance Software Systems (RelWare) says it raised over $1,000 for TEAM FOX at HIMSS, benefitting the Michael J. Fox Foundation for Parkinson’s Research. RelWare had the Back to the Future DeLorean Time Machine parked in its booth and accepted visitor donations. [Inga]

UCSF goes live with robotic pharmacy dispensing and IV preparation, said to be the most comprehensive in the country. [Mr. H]

Altru Health System (ND) also wants to share its Epic EMR with smaller hospitals. Altru is in discussions with nine hospitals across North Dakota and Minnesota.[Inga]

A study by the HHS’s Office of Inspector General finds that 92% of nursing homes have at least one employee who has been convicted of a crime, with nearly half having five or more such employees. I can’t say I’m shocked since Mrs. H was a director of nurses in a pretty good facility and even the RNs there often had records, not surprising given the low pay and the bad working conditions. My advice: stay on good terms with your kids so you can reduce your chances of requiring one. [Mr. H]

A regenerative specialist who has found a way to create human tissue using an inkjet printer with cells as the ink uses the technique to build a biocompatible model of a human kidney on state at the TED conference this week. [Mr. H]

A self-taught inventor who has earned FDA approval for his medical imaging system that uses NASA satellite imaging technology lacks only one thing to bring it to market – the $500K needed to build a manufacturing facility. The MED-SEG system, built in his basement from scrap computers, enhances existing images. He claims it can reduce false positives in mammograms by 80%. [Mr. H]

Syracuse area hospitals are embracing the iPad for remote OB monitoring, documenting observational handwashing monitoring, and remotely controlling the heating and air conditioning systems. One hospital will give iPads to board members “so they can access online documents during board meetings,” which in my experience means they’ll get cool gadgets and superb IT support (at home if they need it) just to make sure they provide their rubber stamp approval to whatever the hospital executives have already decided to do. That’s what I’ve seen, anyway. [Mr H]

Microsoft will pay Nokia a reported $1 billion to convince it to use Windows Mobile on its phones instead of the free Google Android, which was announced this week as the leading US smart phone platform with 31.2% of the most recent quarter’s market share, followed by BlackBerry (30.4%), iPhone (24.7%) and Microsoft (8%). [Mr. H] 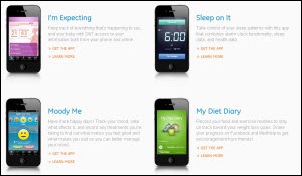 Healthcare organizations added 34,000 workers in February, including 17,000 in ambulatory care centers and 2,100 in hospitals. [Inga]

A hospital claims HIPAA wasn’t violated when a doctor faxed the names of 12 high school students involved in a bus wreck to a local law firm. He got off with mandatory privacy education. [Mr. H]

Strange: a female paramedic and former Firefighter of the Year who took a man’s foot from an I-95 crash scene is sued by the man, who claims his foot could have been reattached if the paramedic had taken it to the hospital. She says she took it to train her body recovery dog.


Currently there are "31 comments" on this Article: