From Terry: “Re: Oracle. We talked to an Oracle contact at HIMSS and their HIE vendor partner will be…Orion.” Unverified.

From BurnedOutFromHIMSS: “Re: Tom Niehaus, president of CTG Healthcare. Just heard he’s joining Encore Health Resources. That’s a big blow to CTG and a great catch by Encore. I think very highly of him and he’ll be a good fit for the culture Ivo and Dana have built.” Verified by Ivo. Tom will be executive VP of business development reporting to Dana Sellers at Encore. Ivo says he’s known him for a couple of decades, thinks he’s one of the most effective executives in the industry, and says he has the integrity and character to fit well into Encore’s culture.

From McLean: “Re: McKesson. Rumors about that they will open source their platform and focus on solutions and services. Given the lack of market expansion they have experienced, this may be a sound decision, making them the Red Hat of IT as a compelling alternative to overpriced offerings from other vendors.” Unverified.

From Marlow Gates: “Re: Certify Data Systems. CEO is Mark Willard, a Brit. Last year he supposedly bagged some huge hospital systems with a system that doesn’t make the usual suspect list of HIE solutions because it doesn’t have a portal. They seem to be flying under the radar for as long as possible. They have some sort of arrangement with Cerner, but are doing direct deals as well. The management team is long on technical skills with not a lot of long time HIS regulars.” Inside Healthcare IT e-mailed to say they’ve written a couple of articles about the company, including one in the current issue that they’ll make available to the reader who asked about the company (assuming it wasn’t a company plant looking for PR). 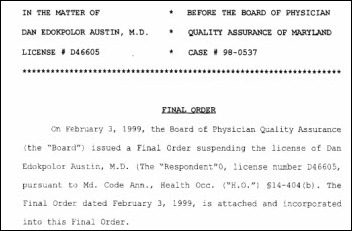 From All Hat No Cattle: “Re: Cignet HIPAA penalty. Not a rumor, but a shocker.” The Office of Civil Rights fines Cignet Health (MD) $4.3 million for HIPAA violations, the first-ever civil penalty levied against a covered entity. The Cignet idiots not only refused to give 41 patients copies of their medical records over a one-year period, they then ignored OCR’s subpoena while making no effort to resolve the patient complaints. Cignet operates four clinics in southern Maryland and insurance operations in the UK, Nigeria, and Ghana. The Web site is pretty seedy-looking, I’d say, and includes a prominent link to franchising information, bragging that, “With Cignet health plan and Cignet discount card, Centers are sure to have a good percentage of cash paying, insurance claim free patients.” I can see the attraction of cash customers — some online sources say that Cignet was the subject of a Maryland Insurance Commissioner’s cease-and-desist order for selling phony insurance. Owner Dan Austin’s medical license had been revoked in 2000 after conviction of mail and loan fraud — I found the above in Maryland court records. He was running a student loan scam.

From Bob: “Re: HIMSS writeups. I certainly appreciate your writing up what you think are the most important, interesting, and amusing aspects of HIMSS. Indeed, I felt (almost) like I was there and didn’t really miss anything (of importance) … well, except for the Blue Cat babes, perhaps ;-)” It’s funny about the conference … you know going in that you’ll miss 90% of it, so you try to pick and choose wisely. That means you could randomly pick 10 attendees and none of them were probably in the same educational sessions, attending the same parties, or picking up the same valuable nuggets. Maybe that’s my niche for next year – debriefing a bunch of people on what they saw that was important just to get a collective opinion. Every year I feel like an outsider who missed the good stuff and I bet I’m not the only one.

From Kyoto: “Re: Allscripts good and bad news. The integration work is not only on the mark, but far exceeded client expectations during previews. Gomez came up with a new approach that allows seamless integration, going well beyond the usual tired approach. It’s also making its numbers. On the other hand, Enterprise EHR clients continue to complain about product quality and sales leadership is leaving. Lack of SCM sales is causing fear in its ability to expand in the community space, part of its key Connected Community strategy.” Unverified.

From InteropNotSilos: “Re: HHS Secretary Sebelius. After all the hot air at HIMSS, she goes home to see the Lewis and Clark Information Exchange, the only one operational in Missouri or Kansas.”

These poll results don’t mean much since Allscripts encouraged its employees to vote for Stephanie Reel, but if you throw her out, it’s a pretty close race between John Halamka and Bill Bria. New poll to your right: if you went to the HIMSS conference, how was the quality of the educational sessions?

Welcome to new HIStalk Gold Sponsor TeleTracking of Pittsburgh, PA, celebrating its 20th anniversary this month. The company focuses on patient flow automation, offering a variety of products for bed tracking, transport tracking, patient milestone tracking through procedure areas like OR and cath lab, the NaviCare OR perioperative solution, a work order management system, and the RadarFind RTLS for asset tracking. Conclusion: TeleTracking is all about squeezing out inefficiency, adding as much as 20% more capacity and collecting a wealth of operational data for making decisions. It’s the #1 KLAS-rated patient flow system and is used by 92% of US News and World Report’s Best Hospitals. Thanks to TeleTracking for supporting HIStalk.

Here’s a TeleTracking video I found on YouTube for my fellow visual learners.

In thinking about the lack of wellness emphasis at HIMSS, I thought a model I’ve used myself that works: RealAge. I took its test once, got hooked on the idea of getting a “you’re this old based on life expectancy” number, and started following some of its suggestions for changes to diet, exercise, and stress. I get an occasional e-mail recommending some course of action or product. Best of all, there’s a great business model since it sells advertising (it’s owned by Hearst). I know it’s ad-based, but I still find the information useful. Any wellness technology will need to be this user friendly to succeed, and may also need to blend social networking into its capabilities (which RealAge doesn’t really do as far as I know).

UNC Health Care (NC) chooses IBM for its private HIE. It’s funny how the definition of HIE has changed – now it takes one for UNC’s own doctors to share information with each other. Next thing you know it will take an HIE to send physician orders to departments. I guess choosing a single system was out of the question.

MED3OOO had an iPad drawing Wednesday of HIMSS for HIStalk readers only. Congratulations to the winner, Susan Murray, director of application services for HCA. Nice! I have to say I’m liking mine quite a bit, too, although I’m just getting started with it. I have the iPad for a nice-sized screen and keyboard and then my iPod Touch that allows accessing everything from a tiny footprint, so I almost don’t need a desktop any more. 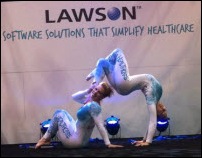 Inga found this HIMSS presentation disturbing. Wonder what was going through the minds of the Lawson suits when they green-lighted it? 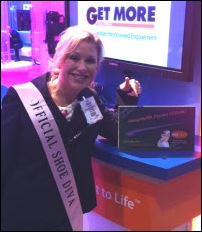 Our shoe judge Lindsay has a day job with RelayHealth when she’s not evaluating footwear, but she obviously keeps her HIStalktapalooza responsibilities on her mind even there, showing the burdens of office inherent in wearing the Official Shoe Diva sash.

Tiny Schoolcraft Memorial Hospital (MI) will lay off 13 FTEs, a sizeable chunk of the 25-bed hospital’s 250-employee workforce. The reason: Medicaid reimbursement isn’t going up and they have to pay for an EMR upgrade. Says the CEO, “With this somewhat gloomy forecast, the hospital must continue to implement, at significant capital cost, an improvement to our Electronic Medical Record system, meeting additional criteria set by federal law … We qualify for EMR funding both for the hospital EMR and our Rural Clinic once we meet all of the (HHS) ‘meaningful use’ standards. We expect to meet the requirements with a 90-day qualifying period in both the hospital and the clinic by the end of the year. We hope to get most of our costs covered by the funding. Unfortunately, you must spend the money and meet the requirements before you get reimbursed. If the standard in not met by 2015, Medicare will reduce your payments.”

System integrators try to appease open source advocates who blame those companies for ignoring the British government’s call for more open source applications. The companies say it’s not their fault that the government signs enterprise software license agreements and lets vendor alliances dictate software stacks that exclude open source components. Examples given all pertain to healthcare: the Department of Health’s enterprise agreement with Microsoft and NPfIT’s Cerner contract that required the Oracle database, IBM hardware, and IBM’s WebSphere application server. One company’s rep threw out the FUD that open source software shouldn’t be used for anything mission critical, but the government said that talk needed to stop considering that the London Stock Exchange runs on open source software.

Thanks to Healthwise, a new HIStalk Platinum Sponsor. The Boise, ID company offers consumer-friendly patient education content for care managers and health coaches; an EMR-integrated patient education solution that helps meet Meaningful Use requirements; and health information content that integrates with personal health records, call center applications, portals, Web sites, and wellness applications. The content library is extensive: a health encyclopedia, decision aids, virtual coaching, medical illustrations, calculators, and slideshows. Mobile access content and tools are coming soon. Founder, chairman, and CEO Don Kemper and SVP Molly Mettler created the concept of “information therapy” in their 2002 book. The company offers a white paper called Getting Patients to Meaningful Use: Using the HL7 Infobutton Standard for Information Prescriptions. I have to say I’m impressed that the 36-year-old company’s mission is simple (empower people to care for themselves, give them a way to ask for help when they need it, and let them decline care they don’t need), that its executives are recognized public health experts, and that it’s a non-profit (!!) I forgot to look them up at HIMSS, so I might have to add Don Kemper to my interview list to learn more. Thanks to Healthwise for supporting HIStalk.

The folks at HealthHarbor e-mailed to say that HIStalk is their favorite industry blog and they recommended that their readers follow our daily HIMSS reports, so here’s a link back to their HIMSS writeup from a price transparency standpoing, just for being nice.

This week’s company-wide e-mail from Kaiser’s George Halvorson focuses on HIMSS, mentioning that 35 of the 55 Stage 7 hospitals are Kaiser’s. He also mentioned a global HIT strategy document the company presented at the Davos World Economic Forum in Switzerland last month. The link provided was invalid, but I Googled and found what I assume is that PDF document here. 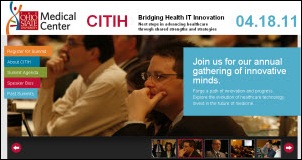 A 27-year-old doctor in China using the alias Snooky is fired for comments she made about patients on a microblogging site, including, “The blood pressure of one patient has been dropping, and it seems that I might have to get up at midnight to dispose of the corpse. It’s not easy for me to keep my bed warm in such cold weather, so please don’t die until I get off work.”

Mass General will pay HHS $1 million to settle a HIPAA case in which a billing manager taking paper HIV/AIDS records home accidentally left them on the subway.

KLAS says 35% of ambulatory EMR users are replacing their systems. Most often considered to buy are Allscripts, Epic, and NextGen.

Most fun healthcare IT vendor
athenahealth

Biggest HIT-related news story of the year
Meaningful Use

Most overused buzzword
Meaningful Use